The 2011 to 2012 New Year's Eve was nothing to write home about. It included a late afternoon gutter-cleaning and yard-raking session, followed by take-out pizza and my pregnant ass in bed by 9pm. Not much different than last year, really, except last year we had a fancy dinner at a local seafood restaurant, where I made love to some halibut and nursed a few raspberry martinis. Bimmer put the nix on the martinis this year. Oh, but there's always next year!

Right... so while the NYE parties have waned and everything has gotten more tame as I've gotten older, I still love to think back to the NYE's of the past decade or so. Like 2002 to 2003 when Mr. Smith ended up puking in the bushes after downing almost an entire bottle of rum on his own. And there was that silly card game and Rowdy's Asian boyfriend who was kind of a dickwad. And I distinctly remember ending up sitting on the floor at one point in front of the liquor cabinet and wondering how I got there. Oh! And Kimhead's date got too drunk, so he couldn't walk her all the way home when it was over. Oh... good times.

Or the 2000 to 2001 party at my dad's bachelor pad where Rowdy brought her fondue pot! And there may or may not be photographic evidence of me and Miss on the deck in the snow sporting bras and a pirate hat. That was also the year I drunkenly knocked a decorative plate into the toilet while there was still pee in the toilet and I had to fish out the pieces with my bare hands! Yuck!!! Or then the 2001 to 2002 party in the ghetto that Mr. Smith took me to where a guy fake proposed to his woman in front of us. And then we ended up at Steak 'n Shake where Mr. Smith fake proposed to me in the middle of the restaurant. Yup... more good times.

However, the best has got to be the 1999 to 2000 New Year's Eve. We were seniors in high school, most of us still only 17 years old. Miss's parents were gone, so we took over her house for a little get together. I think my dad hooked us up with some alcoholic beverages. (Or was it that 23 year old guy that I was talking to on AOL who once stuck his tongue in my ear?) Regardless, there were definitely lots of Zima's with Jolly Ranchers! (Which is hilarious now because apparently Puff also used to drink the same combo back in the day. We were totally destined to be together!) I don't really remember much about that night, but there are lots of photos that I'm sure the guys at Walgreens got a kick out of processing. It was one of those typical teenage nights that has provided me with good laughs for the past 12 years. Sure they're hazy, drunken memories, but they're fun, awesome memories just the same. 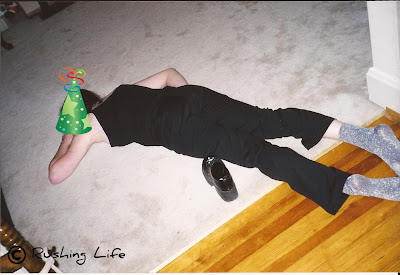 This photo pretty much sums up that evening.

This was before Miss accidentally dialed 9-1-1- and invited the cops to our shindig!!!! ::insert halo::
Posted by Gail at 9:09 AM
Email ThisBlogThis!Share to TwitterShare to FacebookShare to Pinterest