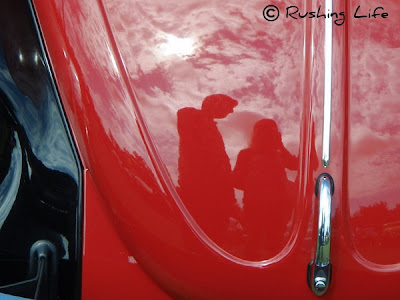 As I'm sure I've mentioned time and time again, Puff's a car guy. After leaving The Ex, who was a comic book/action figure/glorified 8 year old kind of guy, I was happily refreshed. It seemed like something I could definitely get into a bit more than, say, Star Trek conventions.
This photo was taken the first fall we were together, in a tiny town in South Carolina at a school or veterans club or something like that. It was my first foray into the world of car shows. And surprisingly, I didn't hate it. In the 3 years that we've spent blissfully together since then, I've been to better shows and worse shows. I've taken more photos of cars than I could ever need or want in my entire life. I've enjoyed the time we get to spend together when we are there, even if I'm overwhelmed with useless knowledge of the packages offered and the types of engines.


But as Thanksgiving has just passed, and I'm heading into Hell Week at work, I just had to step back and look at my life through rose-colored glasses. I am so thankful for my husband and the life we live. I am so thankful for the baby he has given me. I am so thankful for the chance I took 3 1/2 years ago to go on a blind date with this man. Who knew that car shows would end up being a staple in my life? I certainly never did. But then again, sometimes God has pretty awesome plans for us that we can never begin to imagine.
I just hope those plans someday involve that Audi A7! ::Insert sheepish grin::
Posted by Gail at 5:39 PM
Email ThisBlogThis!Share to TwitterShare to FacebookShare to Pinterest