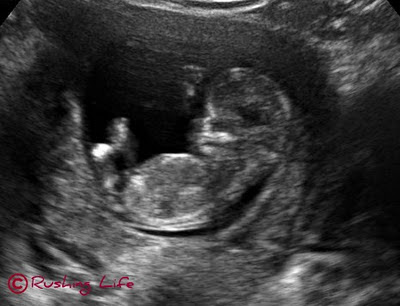 We've drafted a new player. They're a bit undersized and still not quite ready for the starting lineup. But I have a gut feeling they're going to make a giant impact on this team before too long.
We got the good news back in mid-September. Do you know what I was doing earlier that same day? I was at the shooting range. BEST. DAY. EVER.
My immediate reaction was not the one of elation I had expected. No, it was disbelief. Puff and I had been trying for what seemed like forever (but was, in reality, only a few short months) and so when that plus sign appeared on the stick, I stormed out of the bathroom and demanded he drive me to CVS to buy another test. Or twelve. Thankfully, the cashier didn't question me like they had when I bought an ovulation kit the month prior. Assholes.
After taking another test that evening and one the following morning, just to be sure, I started to allow myself to get a tiny bit excited. We walked through when to call the doctor, when we would start telling family and friends, and I picked out a piece of furniture in the CB2 catalog that would look super adorable in the baby boy nursery in my head. (We all know we already have the names picked out!) All I have ever found missing in my life since I met Puff was a baby. And here I was, finally served one on a silver platter. And all I could think was, "Fuck. This is some scary ass shit!!!"
So... in case you haven't gathered, I'm going to be pretty up-front and real (as usual) with the remaining months of this pregnancy. Just remind me to hide these entries from the kid when they're old enough to read! Oh... and until we actually welcome this little munchkin in May, I figure I need a cutesy name to use for it. Other bloggers I read called their in-utero baby "Cash" or "Peanut" or "Bean." I've decided this little rock star baby will be "Bimmer." (That's prounounced beamer.) What can I say? My baby daddy is into cars! 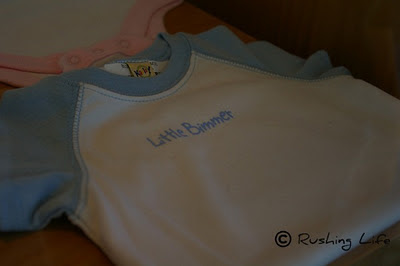 And we know what store Puff will be running to in January the second we find out the sex so we can snag up one of those bad boys for Bimmer to rock!
Posted by Gail at 8:48 AM
Email ThisBlogThis!Share to TwitterShare to FacebookShare to Pinterest

OH MY GOSH!!!! I AM SOOOOO EXCITED!!! (AND YES, I REALIZE THAT I'M TYPING EVERYTHING IN CAPITAL LETTERS BECAUSE I HOPE YOU CAN HEAR MY EXCITEMENT ALL THE WAY FROM KENTUCKY!!!!!!) You will be a great mom! I know you probably don't realize that now, but you will be! I can't wait to read all about your pregnancy and see pictures of the little bimmer!!! Congrats to you and Puff!!!

Thanks Kari! We are so excited! And so overwhelmed with all of the love and support everyone (well, except the mother-in-law) has given us with this wonderful news!