Back in this post, I mentioned I was going to temporarily suspend Flash Bulb Fridays in favor of another project. Well, after being inspired by another blog's "Project 52" where they take a photo each week of something in their life, I decided to do the same thing with Bimmer.

Actually, I mentioned recently that Puff had bought me these awesome blocks that I planned to use. And while I don't intend to start posting photos of me and Puff or our friends or family, I will go ahead and post one year's worth of weekly photos of our little angel, Bimmer. My hope is to post them on Fridays, but as I have quickly learned, being the mother of a newborn who eats a lot and is otherwise very alert, having time for much other than her is difficult.

So... here's our sweetheart. Hope you pop back often to see our little one grow! 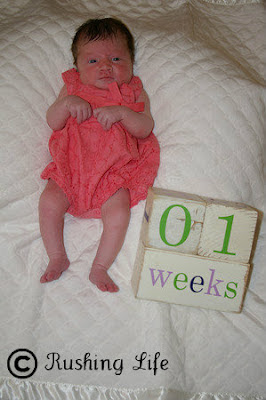 Posted by Gail at 9:57 AM
Email ThisBlogThis!Share to TwitterShare to FacebookShare to Pinterest

She is so sweet! I can't wait to see all these pictures!!