Put the Boob Away

I'm a little bit behind the times here, with that whole giving birth thing, but I definitely wanted to weigh in on this whole controversy... 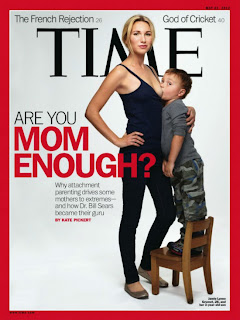 Before I get off on a rant here, I want to be very clear that while I am not a personal fan of breastfeeding (especially in public), I understand and respect your decision to do so with your own child. "Attachment parenting" isn't my issue here. Being a dumbass, however, is.

I'm still trying to figure out what in the world went through this woman's mind when she decided it would be perfectly normal and OK to have her photo plastered on every newsstand (and internet site, TV show, etc.) across the land with her boob whipped out in her son's mouth. A son who is clearly old enough to go to the fridge and get himself his own glass of milk. I heard that she also breastfeeds her FIVE YEAR OLD step-son. (Where is the birth mother in all of this???) Now... last I checked, that was kindergarten age. So, I'm pretty certain little Johnny Boob-Sucker has probably already been ridiculed for this.

Why do I say that? Because I was once a kindergartener, for starters. I even remember the incident where one poor girl peed her pants in class. And I remember making fun of a certain boy for these certain pants he was wearing. I'm pretty sure they got teased for the rest of the year. Can you imagine what kids would say and do to a boy whose step-mom just told the universe that he breastfeeds? That kid's therapy bills are going to be astronomical!

Not to mention the actual kid whom they showed on the cover. You don't foresee his middle school locker one day being plastered with that photo? Or his fraternity brothers using that against him during rush week? This mother really thought there would be no possible negative outcome from doing this? I understand that she thinks breastfeeding is best for her child, which is fine. Breastfeed him til he's 12 if that's what you want. But don't force the child into a situation where he will have to defend himself against your stupidity for the rest of time.

I read after the article was released that the paparazzi was starting to follow her around and she was getting mad and upset by it.

I'm pretty sure you have no right to be upset by that. You brought this on yourself by not thinking clearly, not concerning yourself with the consequences, and most likely, you did it only to boost your blog hits.

Way to be "Mom Enough."
Posted by Gail at 8:23 AM
Email ThisBlogThis!Share to TwitterShare to FacebookShare to Pinterest

Yeah this article pretty much pissed me off!! I breastfeed but I believe if the kid is old enough to ask for it he's too old! And these parents can't claim health reasons bc I'm pretty sure that unlike Africa where this might be normal, this kid has access to healthy and nourishing foods. And he has the teeth to eat them. I truly believe it's all about control with these moms...cut the apron strings already!!!!