Earlier this spring, one of Puff's good friends filled me in on some gossip that I've had a hard time getting out of my mind. Apparently, when Puff and I were just starting to get serious, the MIL told a few of his friends that I wasn't good enough for him. (In so many words... you get my drift.) She said that our relationship would never work because it would be really hard because we weren't enough alike, there would be too many compromises, and it would be way too difficult.

Yet, here we stand... 4 years together. 2 years of marriage. 1 beautiful baby girl. 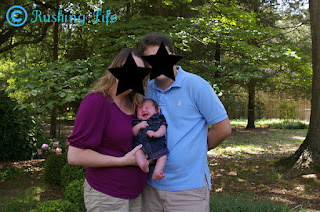 Part of me chalks it up to her being wary of her son getting in over his head. Part of me likes to think she was just trying to look out for his best interest. Yet, most of me just thinks she's a jealous bitch who thinks of me as stealing her son. Well, he's 34 years old. He can't stay tied to you forever.

All that cattiness aside, her comments about compromise and about not being alike enough struck a chord. Aren't all relationships (romantic or otherwise) jam-packed with some type of compromise? To be honest, over the past 4 years together, I've never felt like I've had to give up too much of myself in my relationship with Puff. Nor has he felt that way either. (OK, so it's a huge, giant compromise on my end to have house guests, but other than that...) I wish the MIL could hear herself. She's the one who never wants to compromise on anything when it comes to visits or holidays. It's always been her way or the highway. We bend over backwards to accommodate her wishes as often as possible. Thankfully, we've grown more of a backbone lately and have had to put our foot down. It can't be a one way street. Especially not now that we have Bimmer as our top priority.

As for not being enough alike? My first instinct is to ask her if she even really KNOWS anything about me and my likes and dislikes. But that aside, I will agree with her. On the surface, Puff and I don't have a ton of similar interests. But you know what? We've learned to embrace each other's interests over the years. I never knew I'd love to take an aimless convertible ride through the mountains to hike to a waterfall. And I'm pretty sure Puff never thought he'd actually like to watch "Project Runway." The similarities that are there are the things that matter most. I was "perfect" on paper with Mr. Smith, but that didn't end the way everyone thought. Why not? Because sometimes being perfect on paper isn't the place to be perfect.

Yet, it is an amazing compliment to me and Puff to hear others tell us they envy our relationship. Or how happy they are for us to be together and how they hope to have that one day. Or to just tell me, in general, he's the best guy I've ever been with. And not to fuck it up. (I heard that a lot from my family early on in our dating!) I think it's pretty obvious to most people how much in love we are with one another. Yes, we will have ups and downs. There will be compromises. There will be times when I've just had enough car shows or he's tired of picking out paint chips for the dining room. But at the end of the day, we are a unit. A happy, loving, family.

And no crazy person can take that away from me.

Posted by Gail at 8:45 AM
Email ThisBlogThis!Share to TwitterShare to FacebookShare to Pinterest

Aren't in laws fun?!? In our case it was actually my mom who had the biggest problem with Steven. She said recently that she needed to apologize to him because she was really mad at him when we got married. Now their relationship is great! But we are going on 13 years, 9 married. Hopefully your MIL will get her head out of her ass in a few years too!! ;-)