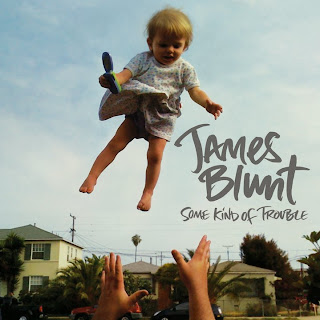 "Some Kind of Trouble" by James Blunt came out in the fall of 2010, so I'm a wee bit behind on reviewing it as new music. However, I didn't get it until Christmas 2011, so I've been jammin' to it this spring for the first time. Or well, as much as you can jam to some James Blunt.

We all know "You're Beautiful" from years back and probably got totally sick and tired of hearing that song. In fact, many of you probably wrote him off after that song and never listened any farther. Yet, for some reason, I picked up that album. And the next one. And then a third. It's a bit out of my typical musical genre to like something so, well, mellow. But I found that popping him on at work sometimes was great background music. And the longer I listened to the songs, the more I grew to like them. (The song, "1973" off his 2007 album is my all-time fave.)

And "Some Kind of Trouble" doesn't disappoint. It's smooth and relaxing music. But it's still poppy and cool. And some of the songs are even a bit more upbeat than his previous stuff. "Stay the Night" and "I'll Be Your Man" are my favorites from this release. They're a bit more upbeat and just kinda want to make you tap your feet.

I can't really say one album is superior to another, but I definitely would recommend trying it out. Just some laid back, cool, easy listening.
Posted by Gail at 10:43 AM
Email ThisBlogThis!Share to TwitterShare to FacebookShare to Pinterest