Have I not mentioned before that I am super prone to motion sickness? Yes, this woman here who likes to go for drives in the convertible on windy mountain roads, fly to Europe, and cruise the Caribbean. Eh... there are drugs for those sorta things. Taking drugs to rock Bimmer to sleep in the middle of the night? Not really something I want to do.

So, Puff and I decided that we would get the Poang chair from Ikea. It has enough of a bounce to be effective, but won't make me sick to my stomach. And the modern lines totally jive with my design sense. Plus, the price tag is pretty sweet, and we know the chairs can last a good while.

Enter Kimhead. She's had two of these chairs for years and years, which is why we know we love them. And recently, she made the call to rearrange her living room. Oopsies! One of those chairs no longer fits! So, being the super awesome friend that she is, she offered to let Puff and I borrow one of the chairs (footstool included) until she needs it back for whenever she moves again. And since she doesn't plan to do that within the next year, we were elated and overjoyed to be able to free up some space for her, while providing a cozy spot for Bimmer to curl up with us! 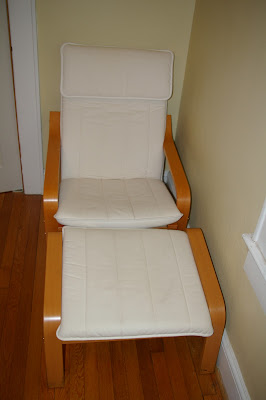 I had thought about buying a new cushion for it, so we didn't ruin Kimhead's, but after some thought, we figure it will be much nicer to re-gift it BACK to her with a new cushion. So, whenever we get the call that she has once again found space for it, we will be making a run to Ikea to let her pick out her cushion of choice. In the meantime, we are proudly chair-sitting for her, and we can always tell Bimmer that her Aunt Kimhead helped fill up that corner of her nursery.
Posted by Gail at 7:20 AM
Email ThisBlogThis!Share to TwitterShare to FacebookShare to Pinterest