Back in May 2010, Puff and I were hanging out at the Miami airport, waiting for our flight back to civilization following our wonderful week-long honeymoon in the Caribbean. In a fit of boredom, I bought a Rick Reilly book (we all know my love for him HERE and HERE) about weird sports. When I came to a chapter about a prison rodeo, I couldn't contain my excitement. It was one of the few "weird sports" where you could actually go and witness the event. (I mean, really, who would want to go to the Rock, Paper, Scissors championship?)

And it was decided... October 2011 would be the date we flew to Louisiana for the rodeo at the state penitentiary. 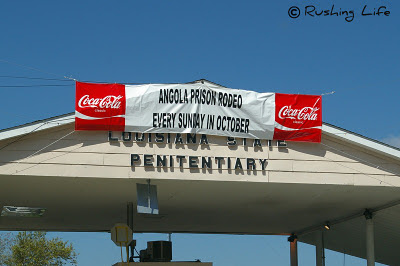 As I mentioned HERE, the first few days of the trip in New Orleans were less than impressive. But once we got on that two-lane back road, just north of Baton Rouge, we were ready to party. I was prepared for our car to be inspected by bomb sniffing dogs and to get an inappropriate pat down by a prison guard. But it turned out to be much more slack than I expected, but not in a bad way. My first impression of the "farm" that we had to drive through once we were on the property was one of awe. I was snapping photos left and right! 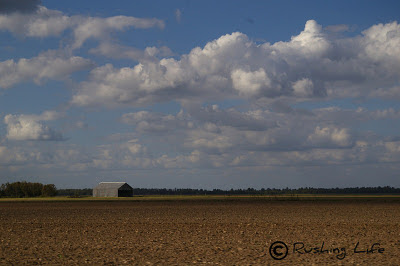 The event was fantastic. We strolled row after row of amazing hand crafted arts & craft items. We were so upset we hadn't driven, because there was no way that $150 Adirondack chair would fit in my suitcase. We did end up with a $20 leather belt for Puff and I scored a great deal on some beautifully carved wooden ornaments. Puff snacked on jambalaya and I kept eyeing the kids with cotton candy. Yes, kids. It was a family fun event... complete with rides and games aimed specifically for children! We listened to the prison gospel group and another prison band. We bought t-shirts that read "The Wildest Show in the South" and cheered on through all the ridiculous games and stunts they put the prisoners through. 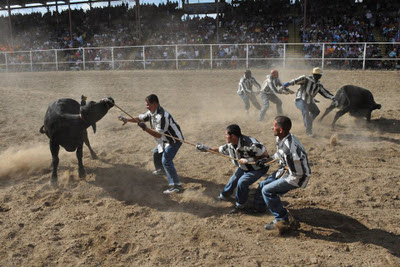 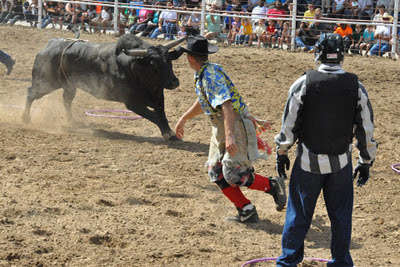 When we were set to leave, it was the easiest exodus EVER from an event. And I've been to more events than I can count over the years! We took the scenic way around back to the entrance, but that was OK. I got to see more of their farm land, their ponds, and some of their barracks. (I use that term since I have no idea what they really call them!) And while we felt crazy safe the entire time, had great interaction with the prisoners that we purchased goods from, and are already planning on going back in a few years with our kids, there was never any mistaking you were in a prison. 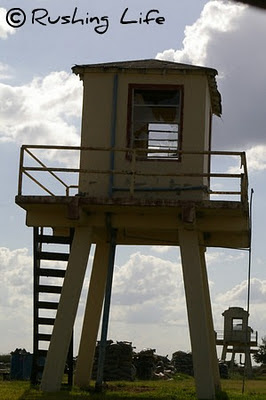 But dammit... had it just been a regular rodeo, that would've taken some of the fun out of it!
Posted by Gail at 8:29 AM
Email ThisBlogThis!Share to TwitterShare to FacebookShare to Pinterest