Earlier this month, Puff and I jetted off to Louisiana. We cashed in 80,000 frequent flyer miles, booked a swanky boutique hotel in the French Quarter, and imagined two days of photographing cemeteries and wrought iron. 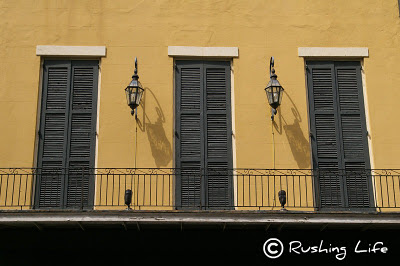 This was the New Orleans I had envisioned. Gorgeous old buildings just oozing with charm. Quiet streets brimming with history. Beignets in cozy street-side cafes. 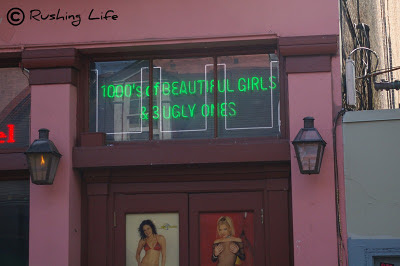 This is the New Orleans I experienced. Overall, I found the city dirty, drunk, and perhaps afflicted with syphilis. I'm no prude by any stretch of the imagination, but to walk down Bourbon Street and be greeted by glorified hookers in thongs in front of large photographs of two women engaged in a sexual act... Well, it was just a bit much. (Still trying to figure out what those tourists were thinking taking their children there!) 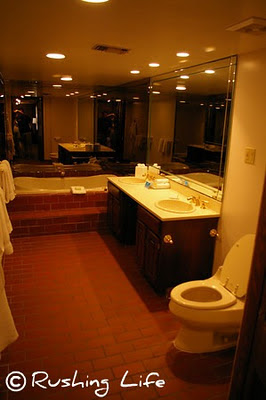 Then we had the hotel. The location was perfect... a block off Bourbon and within walking distance to everything you'd want to see. However, our room wasn't ready during check-in, so they upgraded us to a suite in the carriage house. I should've known something was up when they couldn't give me exact directions to the back of the building to arrive at said carriage house. Once we got past the smell of old barn, we realized the giant bathroom was missing one thing... a shower. A bit of bitching later and we were in another room. Except, it wasn't until the second morning that we realized we didn't have to take a COLD shower. Yes, I took a ho bath in the sink during a $500 hotel stay because we didn't immediately realize you had to run the hot water in the sink in order to get hot water in the shower. How naive of us! @@ 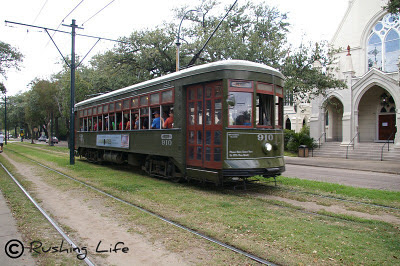 Then we had the streetcar debacle. Since parking in the French Quarter was iffy, we weren't sure how the Garden District would be. And we learned the hard way the streetcar isn't the best option. Getting there wasn't the problem. We meandered through another gorgeous cemetery, had a nice lunch at a sidewalk cafe on Magazine Street, and ducked up a residential street to admire some stately mansions. I even snuck into the men's bathroom at the local library since I couldn't find the women's! However, after waiting a half hour for a streetcar to carry us back to the city, it arrived. And went right on past us. People were basically hanging out the windows, it was so jammed. Ten minutes later, another one pulled up. The driver said it was too full, but when a girl jumped off, I jumped on. And hoped Puff would follow. I got to know the couple behind me very well in those cramped quarters!
It was about that moment we decided we were ready to get the heck out of New Orleans and off to the Louisiana State Penitentiary.
We did find a few things to like about New Orleans though... 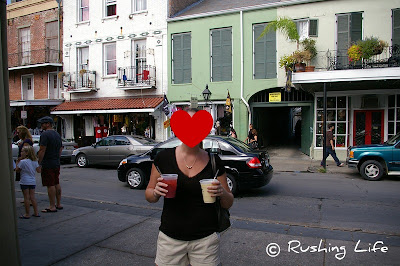 Like banana daquiris made with ice cream at 10 in the morning. And the super awesome service we had from a scruffy guy named Murdoch at Hard Rock Cafe. (It's pretty sad when the best food and best service we had in the entire city came from a HRC!) Oh, and a big ol' shout out to our amazing tour guide, Bill, at Haunted History Tours. The 2 hour ghost tour through the French Quarter was one of the highlights of our few short days in the city.
Unfortunately, those few things weren't enough to sway me to ever need to go back. I picked up my state. (I've now been to 44 of them!) I can say I've experienced the debauchery of Bourbon Street. Perhaps had I gone 10 years ago with a group of girlfriends and my "Lick for $5" t-shirt, I would've seen the city differently. Alas, Puff and I are old fogeys now who would rather spend time browsing arts and crafts made by prisoners than get wasted and flash drunkards for beads.
(Stay tuned for an upcoming post about our trip to Angola!)
Posted by Gail at 8:42 AM
Email ThisBlogThis!Share to TwitterShare to FacebookShare to Pinterest

Sorry you didn't enjoy New Orleans! It's one of my favorite cities, but I haven't been back since Katrina so I don't know what it's like now. But I love the Garden and the Mansion districts. I keep saying we're going to go back and do the Plantation tour. But I agree, I think we're just too old now to enjoy Bourbon Street the way we might have 10 years ago! Kind of sad, isn't it!??!