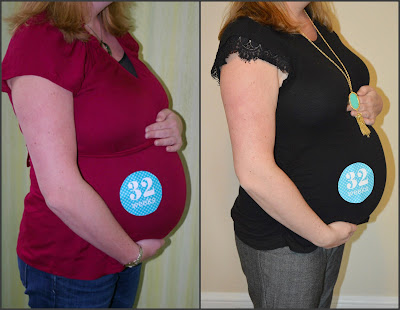 Bimmer on the left, Healey on the right
My oh my - baby on board!

Since last update, the reality of a second baby (or just a baby in general) has really hit both myself and Puff. The kicker for me was our hospital orientation tour. Yes, I realize we just had Bimmer 3 years ago, but I felt like a lot had changed with my doctor's practices, so I figured taking 30 minutes out of our day to make sure we were comfortable with the hospital was a wise decision. We are going to the same hospital where Bimmer was born, but this time it will be a planned C-section versus the emergency one we had last time. I think it is going to be a lot different mentality - and possibly making me a lot more anxious counting down the actual hours - but I like that we had such a good experience last time with our nurses and everything, that should ease some of my nerves. Let's hope anyway.

We did go and buy a rock 'n play to use this time for the first little while. If we had another actual bedroom, Healey would be going straight in her crib, but the sleeping situation at the house isn't ideal. (Puff needs to be able to sell his spare dining room table that's in our office before we can move forward with crib training.) We opted for the one that plugs in and can rock itself. We also got the car seat protectors for our leather seats and made a list of other things we needed. My girls at work also hosted a Sprinkle for me last week, which I will post about in another upcoming post. And I finally convinced Puff to get the baby gear and baby clothes out of the attic. Still need to finalize some of that sorting/stashing/trashing, but at least we're making a little headway. (Did I mention that we had someone come in March and put down plywood on the rest of our attic so that we tripled the size of our storage space up there? Loving it!!! Storage bins make me happy.)
I've noticed a few things happening differently with my body since last update... more back pain - so much so that I am sleeping in my belt sometimes, really oily skin - yielding some unpleasant zits, and sometimes sharp pains in my stomach after eating a large meal. I guess all those organs are getting more and more squished, so there's just not as much room in there to eat as much as I sometimes want to eat! I've gained about 42 pounds at this point, which is way more than I had hoped... although some days I don't feel as large as I did at this point with Bimmer's pregnancy. I only gained 48 total pounds with her, but I have known from the get-go this one would be worse. I'm also getting a lot more swelling in my feet this time around - but probably because I'm up and about a lot more than I was last time (since I'm working this time, and wasn't at this point last go round).
My most favorite thing that happened in the last two weeks??? We got Healey's C-section on the books!!!! She will be making her arrival at 12:30pm on Thursday, June 18th. (So be prepared for a few blog-less days around that date.) I had hoped to get the 7:30am surgery, but the doctor I preferred (the one who delivered Bimmer) wasn't available at that time. While it will suck to have to dilly-dally around a little bit more that day, I am definitely comforted in knowing that he did a great job at stitching me back up and hopefully I will heal the same way as I did with hers. She is still laying sideways and they still say I am measuring big, so I will go back at 33 weeks for another ultrasound. Here's hoping they keep everything scheduled as planned, since lots of people's plans have to fall into place in order to have Bimmer coverage, time off work, etc.
I can't believe Healey will be here in less than two months. In some ways, I feel like this pregnancy has flown by and other days, I feel like it will never end.

Posted by Gail at 7:27 PM
Email ThisBlogThis!Share to TwitterShare to FacebookShare to Pinterest