I will fully admit to being a wee bit jealous that Puff will always have one more Father's Day under his belt than I do Mother's Day, thanks to Bimmer's late May birthday. (Read about his past two HERE and HERE). So this year was his third day of celebration over this little munchkin.... 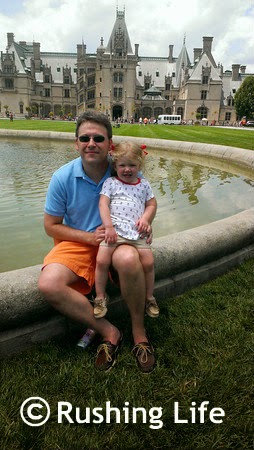 I was at a loss as to what to get him this year for a gift. So I was actually quite excited when he mentioned he'd like to visit the Biltmore. The cost of admission alone would be more than enough of a gift, right? (I did actually get him a gift from Bimmer, along with a card. I'm not that horrible of a wife!) Even though Bimmer had been sick, she rallied that day, so we hit the road to Asheville. (Note: Biltmore lets dads in free on Father's Day and moms in free on Mother's Day too. Plus, for at least the past few years, kids under 16 are free all summer!)
The line to get tickets was outrageous, but Bimmer was lovely and so patient. We knew going in that we were not going to see the inside of the house. Based on the time, we opted to head to the Antler Village and Farm area first. We took some cheesy photos on tractors and wagons, looked at farm equipment, played on a small playground, had lunch at Cedric's Pub, and then checked out the animals in the farm. 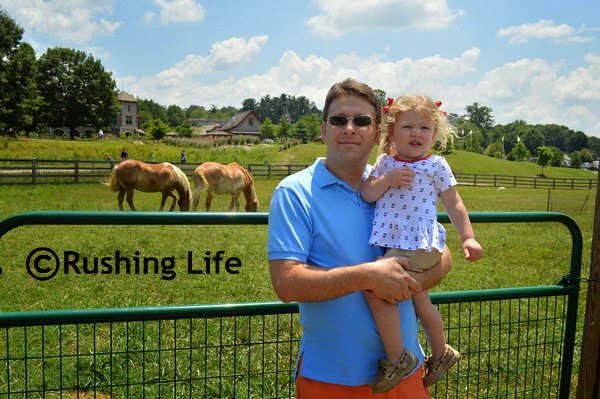 From there, it was time to head back up to the "big castle" (as Bimmer had been calling it) to check out the gardens. But first, we had to stop for a family photo op. 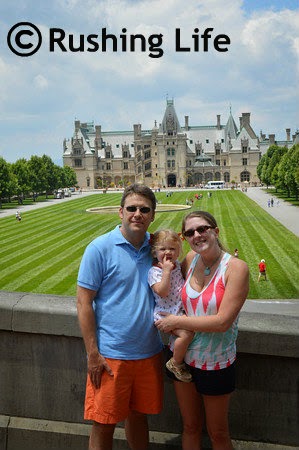 Bimmer really was in awe. She loved running around the big lawn as well. 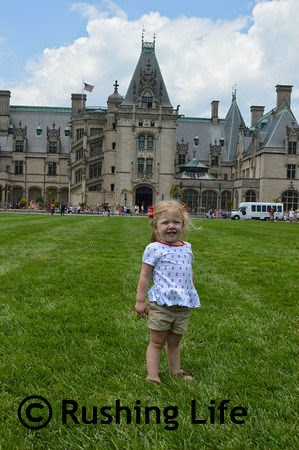 The day was getting hotter (and sunnier) as it wore on, so the gardens were a little rough. Plus, let's be real, gardens in mid-June are mediocre at best anyway. (One day we will get there in spring to see them in their full glory!) But Bimmer hung in there and loved climbing the steps like a big girl. As in, she can now successfully climb steps without the use of any hands whatsoever. Major milestone! It was a pretty awesome way to celebrate my husband and the father that he is to Bimmer. Now I just gotta start thinking up something equally as awesome for Mother's Day 2015.
Posted by Gail at 8:30 PM
Email ThisBlogThis!Share to TwitterShare to FacebookShare to Pinterest