As you are well aware, Bimmer has never been the best sleeper. Now... I take that back... I should re-word. She has never been a good sleeper when sleeping in her own bed. 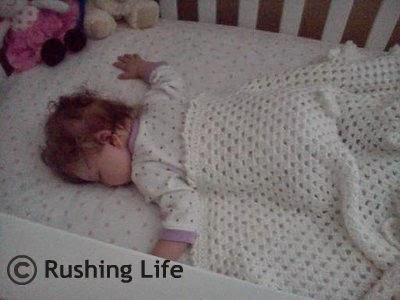 I'm sure you've read about "Operation Get in Yo Crib" HERE before. We had to try that a few times, and even had set-backs after all was said and done. Can you blame us for wanting to snuggle with that sweet little pumpkin?!?! Anyway, after a month or so of super frustration, on a whim, I took the front off her crib and made it a toddler bed. I made grand fanfare of it all, taking photos, making her get in and out of the bed on her own. It was a big flippin' deal. She was a big girl and I wanted her to realize that this was a big step in her life. 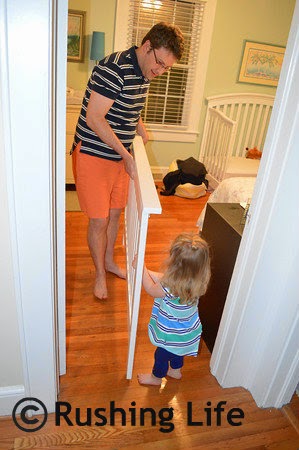 And after that first night, it was BLISS. Total bliss, I tell you. She went down without much incident, and even if she woke up in the middle of the night, it was only once, and she was easily put back to sleep with a guiding hand and a rub on the back for a few seconds. 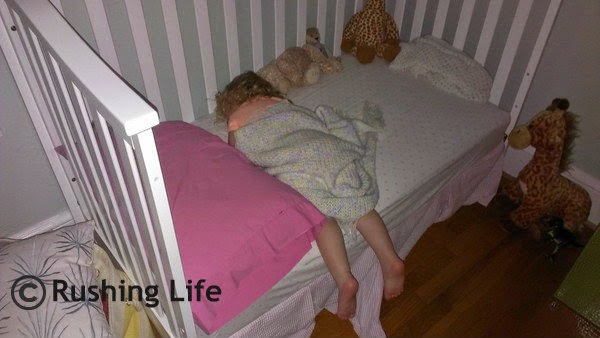 But then we started faltering, as we are known to do. And Bimmer started to become more resistant to bed in general. So after a few nights of fighting with her and sitting on the floor by her bed for an hour trying to let her work it all out, I gave up. Then, we went to Florida. So I really gave up, as I slept with her in my bed for an entire week. We knew coming back, we would have to come up with a new approach.

And what has that approach been? Well, for now, we are letting her fall asleep in bed with us, and then about an hour later, we are moving her to her bed. It sucks on one hand, but it's great on the other. She then is staying in her bed the entire rest of the night. Which means Puff and I are able to get more rest ourselves, without a toddler kicking us in the back/side/head. Sometimes she still wakes up in the middle of the night, often asking for a clean diaper, but then she goes back into her bed (not ours) without much fuss at all.

It's working. For us. For now.

The bottle is going to be kaput before the end of the summer, so I'm not sure how that is going to affect our whole bedtime routine. Since we took away her morning bottle months ago, she has been reluctant to drink any milk when she wakes up in the morning, so I'm super wary about the bedtime situation.
Oh, toddlers. Such a joy, aren't they?
Posted by Gail at 6:22 AM
Email ThisBlogThis!Share to TwitterShare to FacebookShare to Pinterest