Leaving on a Jetplane

The first time I was on an airplane, I was two years old. We flew from The Fort to Orlando. I have been on countless airplanes since then. Somewhere around college, the idea of flying shifted from being sorta cool and glamorous, to being a dreaded necessity to accomplish my goal of traveling to as many cool places as possible. (9/11 ring a bell?) Yet, even though I don't love flying, I knew that it was the best and fastest way to get from South Carolina to Florida. Yes... it is a looooong ass drive. Trust me. We did it with Bimmer when she was just 5 weeks old. (HERE) 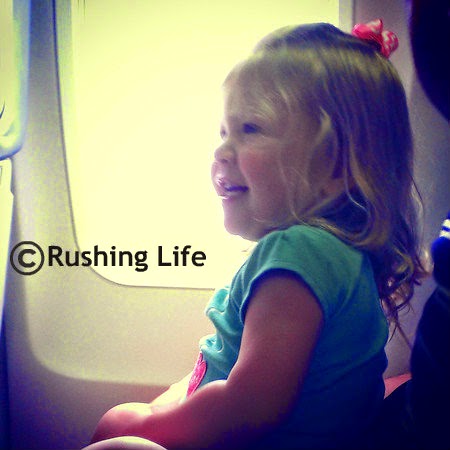 This time, we were taking to the friendly skies. I booked a direct flight from Atlanta to Tampa, because I sure as heck didn't want to risk any mix-ups on flights on a connection. And why Tampa, when our destination was Sarasota? Well, because we would end our trip in Clearwater, and it made more sense for me for our final destination to be closer to the airport. Our first flight out was at 8:45am. Logistically, the MIL put a wrench in my plan by being out of town and not being able to drop us off at the airport. So we had to get a car service pick us up at her house (where we spent the night prior) and drop us off at the departure terminal.

Why did we not drive ourselves to the airport? A few reasons... but glad you asked. First off, Atlanta airport parking is ridiculous. It was actually cheaper for us to get a ride than it would have been to leave our car there for 7 days. Second, had we driven, the reasonably priced lots sometimes involve shuttles and/or a lot of walking. We had Bimmer in a stroller, her diaper bag, a carry-on, two suitcases, and her car seat. There was no way we could have lugged all that crap from a parking space to the terminal. 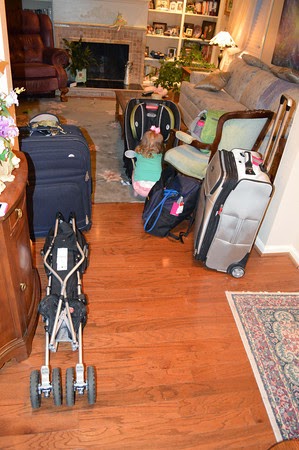 Which brings me to our stuff. It was probably the most stuff I have ever traveled with. But, it was still less than I see others taking! We took two medium sized suitcases and we split all of our clothes between the two. (We always do that in case one suitcase manages to get misplaced en route.) Then we took Bimmer's car seat. I had contemplated renting one through the car rental company, but then was too worried about the quality of the seat we may get, so we decided to take our own. We bought a big ol' bright orange bag from Babies R Us to put it in, so at least it was covered a little bit. We checked it because we didn't really want to putz with trying to lug it on to the plane.

As for stuff we took on the plane? We are minimalists when it comes to carry-ons. In fact, people with rolling carry-on suitcases should be taken out back and shot. Puff agrees. So, we had Bimmer's umbrella stroller (which got gate checked, but was necessary to take with us, especially since the Atlanta airport is huge) and then we had her diaper bag (which has these handy-dandy straps that hook right on to her stroller handles) and then a backpack. What did we take to entertain Bimmer on the plane? 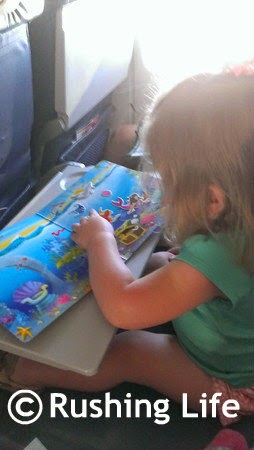 I was a mad-woman in the weeks leading up to the trip, trying to find the best plane toys and activities. A small toy store in Hendersonville, NC, introduced us to the Melissa & Doug water paint contraption (you put water into a brush and the paper turns colors when the water is used) and a magnetic board. We let Bimmer choose which one she wanted, and she went with the mermaids. I hid them as soon as we bought them, so they would be a novelty on the plane. I also went to the dollar store and got a small pack of fat crayons, a small notepad with colored pages, a small coloring book, and lots (and lots) of stickers. We also let her take one stuffed animal/doll. And snacks... raisins and gummies seemed to be my favorite since they took awhile to chew and take awhile to get out. (Thanks to Katie for that advice!)
I feel like this post has suddenly rambled its way into a corner. Let's regroup. Here are my tips for flying with a toddler, after we successfully got there and back with no meltdowns or angry neighboring passengers:
1) Take lots of toys and snacks
2) Be as hands free as possible - having small carry-ons that were hands-free was helpful for us
3) Be the LAST people to board the plane - boarding first to have extra time to get settled, just means more time trying to keep a 2 year old restrained, which seemed like the dumbest idea in the world to me
4) Change her diaper right before you board - we ended up having a poopy one right before we came back and I was so happy I didn't have to try to change that on the plane
5) Be patient and don't expect to be able to "sit back and enjoy the flight" - although Puff certainly got to more than I did, but I was the one switching her from one activity to another when I noticed she was starting to get bored - even the SkyMall magazine was a hit, as was taking everything out of the seat pocket and God bless the plane on the way back with built-in TVs with some shows and games that were FREE!
6) Get them their own seat! I couldn't have imagined having to hold Bimmer at this age - since she was technically still under age 2 when we took her.
Puff and I have definitely decided that even if Bimmer would have cried for the entire hour and ten minute flight, it still would have been better than driving. I'd say we have officially switched gears and have opened up a whole new option for our family and we may just get back on the travel wagon sooner than expected. I'm thinking Turks & Caicos for next year... time to get Bimmer a passport!
Posted by Gail at 6:28 AM
Email ThisBlogThis!Share to TwitterShare to FacebookShare to Pinterest