Kick Off Your Shoes

I'm pretty sure this post is going to be for no one other than Kimhead.

(Just to give you a little insight on Kimhead's shoe obsession, check out this post of hers from back in May where she shoes a photo of her shoe reorganization.)

I am sooooooo not into shoes. Seriously... if I could own a pair of flip flops for the summer and a pair of gym shoes for the winter, I'd be set!
Since I don't have 20,000 pairs, I thought I would talk about what I figure are MY necessities.
#1 - TOMS 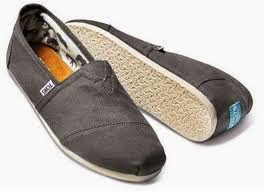 Until last fall, I would have never had this on any list anywhere. They looked cool, but they weren't really my thing. Then I decided I needed some comfy shoes that were dressier than gym shoes and that I could wear all year round. Enter TOMS. I am madly in love with my camo ones (which they don't have anymore, but I am hoping they come back with in the fall so I can buy another pair) and I recently bought these burlap ones to wear this summer. They were a little more interesting than the typical canvas ones. Puff was my consultant on that decision.
#2 - Reefs 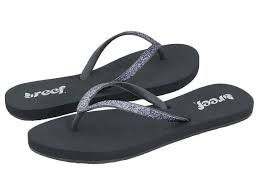 My go-to flip flop for years has been Reefs. When I started college, I wore flip flops again for the first time since I was little. They just had not been my thing. Then I moved to South Carolina and realized they were kind of a necessity. I gave up on the cheap Old Navy ones once I realized the part that goes between your toes does matter... and Reefs have been my favorite ever since. I have black ones, dark brown ones, black ones with aqua straps, and most recently, light brown ones with gold metallic straps.
#3 - Nine West Ballet Flats 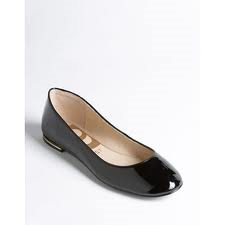 When I began my first real job in my current industry, I realized that the cute high heels from my former life were NOT going to fly. I was up and down and on my feet way too often for that. I had to give up on cute shoes. But not totally. I needed something work appropriate but that was comfortable if I were going to be running around. (Sometimes quite literally.) I have found that Nine West's ballet flats are my favorite. I need a rounded toe! I have them in black, silver, garnet, turquoise, bone, and herringbone. I keep my eye out for new colors, since I am in desperate need of a new colorful pair. I'm hoping to find some in leopard!
#4 - Nine West Riding Boots 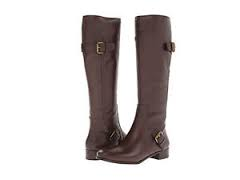 I have loved the look of riding boots for years, but never felt that I had anything to wear with them. Once I finally jumped on the skinny jean train, I knew that riding boots were a must. I don't have too much to elaborate on, other than my Nine West ones have done me good so far. They look cute and after wearing them a time to two to break them in, they fit great! It helps that I can wear them sometimes with a skirt to work too. The flat bottoms work almost as well as a ballet flat for me!
#5 - Skechers

When Puff and I were set to go to Europe in 2011, I wanted some gym shoes that didn't scream American Tourist. So I found some cheap grey Skechers that were slip-ons that were comfy and looked much less jarring than the typical Nike running shoe. And when I got pregnant, they were my saving grace! No laces! Brilliant! Now, I feel like I can only wear them with pants, and they're not meant for the gym, but if I ever get pregnant again (heck, even if I don't) I will probably be investing in another pair sometime soon.
So, there you have it. My run down on the shoes in my tiny closet. I seriously don't own that many shoes.... (2) pairs of Toms, (2) pairs of gym shoes, (4) pairs of Reefs, (2) pairs of leather flip flops that I never wear, (8)ish pairs of ballet flats, black boots, brown boots, nude heels, black heels, black summer sandals, brown summer sandals, black summer heels, brown summer heels, white summer heels, pink summer heels, (2) pairs of wedges - although one hurts my feet too badly to wear, and I guess that's about it. For a woman, to be able to list all of those as quickly as I just did, means I totally do not have a shoe problem!
I leave that to Kimhead.
Posted by Gail at 3:28 PM
Email ThisBlogThis!Share to TwitterShare to FacebookShare to Pinterest