I've been a resident of the state of South Carolina for almost 12 years now. The first 6 1/2 were spent in Columbia, where I was a student at USC. (Go Cocks!) In that time, I feel like I have been to a lot of far corners of the state and have posted HERE about a trip to Myrtle Beach and HERE about a trip to Folly Beach. But there is a lot more to SC than the beaches! As my avid readers know, Puff and I go to the mountains quite often... HERE.

I will never forget being on our honeymoon cruise and having a couple from New York stare at us bewildered when we told them that we didn't live near the beach. Their faces almost made me want to laugh. Now, I'm not claiming to be a geography champ (although it is definitely a huge interest of mine) but I would've been pretty sure that anyone who has been to school would realize that the state of South Carolina isn't just a sliver of land that borders only the ocean. But, I digress...

Since I'm hopefully super close to giving birth, I thought I would do a series of entries about the three major cities in SC. Today, we're starting with Columbia. 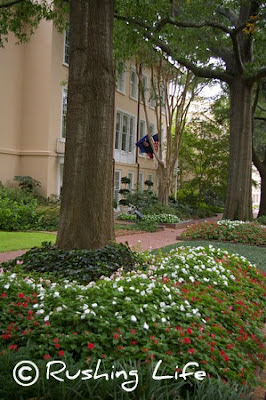 My top pick of a place to visit? The Horseshoe on USC's campus. With the school being such a backbone of the town, it would be dumb to miss it. The Horseshoe is the epitome of the college experience, in my mind. Old, historic buildings with pavered pathways winding under giant trees cascading over the students. The campus is huge... you don't have to see it all. The revamped Russell House in the center of campus is a perfect stop to get some gear from the bookstore. It would really be a shame to come away from this town without something that read "Cocks" on it!

Other sites to see? Check out the state house grounds, the state museum, the children's museum, and definitely Riverbanks Zoo. These are all conveniently located in or near downtown, and the Hampton Inn in The Vista is a perfect place to stay! Now, for food? Hands down, my favorite place to eat is Pasta Fresca, which is just outside downtown in the Forest Acres area. Their creamy marinara makes me cream myself! Gervais and Vine is a great tapas and wine bar in The Vista, but get there early or you will have to wait! For lunch, Groucho's Deli is a Columbia institution. There are lots of locations around town these days, but the one in Five Points has that "vintage" feel that me and my friends remember fondly from our college days. Oh! And dessert you ask? Nonnah's is a no-brainer! On a weekend evening, you'll have to wait for a table, since the place is small. But I've never been disappointed! They even serve up some bananas foster on occasion! My mouth is literally watering just at the thought!

I would recommend some bars and clubs, but since it's been a loooooooooong time since I lived there, I'm afraid I'm just too old for that. I'm sure some things haven't changed though... Five Points is the area close to campus with the typical college-scene bars, clubs, and restaurants. I went out drinking here ONCE. I distinctly remember cheese fries at the end of the evening. I preferred The Vista area, since the bars were nicer and had an older crowd. (They also didn't card at most places, which made our underage debauchery much easier! Plus, older guys buy you drinks... college guys do not.)

Would I suggest specifically coming to SC for a trip to Cola? Nope. But is it a nice place to stop for a night or a weekend, perhaps en route to the beach, or accompanied by another SC city? Absolutely. You probably just don't want to come in July or August. They don't call it the armpit of the state for nothing!

P.S. Check out a friend's blog, Converted Southerner, as she sometimes posts about places and happenings in the Columbia area!

Posted by Gail at 6:52 AM
Email ThisBlogThis!Share to TwitterShare to FacebookShare to Pinterest