Besides drinking castor oil, I think we have tried every wives tale in the book to get Bimmer to get this show on the road. Well, besides sex too. We haven't tried that. While Puff's love for me is unconditional, it is apparent that he is not unconditionally attracted to me. I can't say that I blame him. 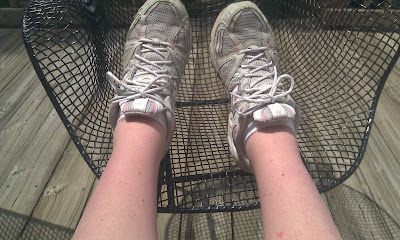 You mean these 39 week cankles that suddenly appeared don't turn you on? 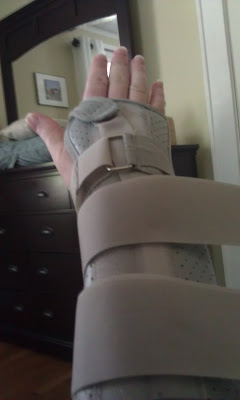 What about my "Pimp Hand?" I can rough you up with this carpal tunnel wrist brace just as well as anything from the S&M section at Hustler!

Alrighty... down to business...

Yesterday afternoon, Puff and I got the OK to schedule an induction for Bimmer... if we wanted. And uh... DUH... I wanted! I'm still just 3cm dilated and 80% effaced, but apparently those conditions are "favorable" enough for an induction to be totally kosher. So, I scheduled it for the earliest they would let me... this Thursday!

If I make it that far, I will be 39 weeks and 5 days, so this baby has definitely baked long enough. The date is extra special too, since it is my grandparent's wedding anniversary. (Awww...) It also gives my parents a great head's up as to when to start making the 8 hour (for them) trek from The Fort to come visit. Sure, Puff's a little bummed she didn't come earlier so we could hit up that cool British car show this Saturday with her, but there's always next year.

Plus, I have a pretty good feeling, that once he holds his daughter, he won't be worrying about cars.

At least not for a good 20 minutes or so.

Posted by Gail at 6:53 AM
Email ThisBlogThis!Share to TwitterShare to FacebookShare to Pinterest

Yeah!!! Congratulations! I have had two inductions and this one probably will be too! I personally love them! Knowing the date, and I never had to worry about the "I was in labor for 43 hours!" horror stories!! Lol- can't wait to see pictures!!!! Oh, and I think your cankles are totally sexy!! Lol