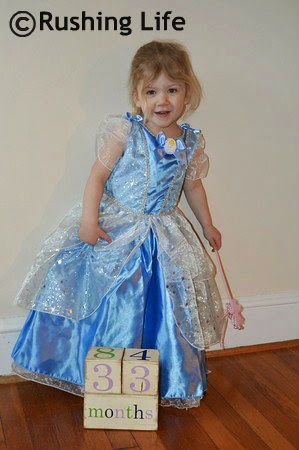 This wasn't the outfit I had planned, but I gotta do what I gotta do to get these pics!
Bimmer's behavior issues at school continue with biting, scratching, and not listening. She'll be good for a few days and then back at it again. It really hurts my heart. I am embarrassed to be around any of the other parents and it just sucks because I know she can be so sweet! She will lay with me and rub my face and tell me she's being "gently" and tells me almost every morning that I'm her "best friend ever." We are working on a behavior chart to reinforce the good behavior days.
Her vocabulary continues to grow and she forms great long sentences. She is becoming more clear to understand, even though as her mom, I've never really had a problem with that. But others are definitely understanding her for the most part. She asks a lot of questions about what things are called if she doesn't know, which makes me proud that she wants to learn and know. She likes to tell us that someone is doing something "on purpose." It happens most often when she is tattling to me about Puff. Ha!
For the most part, she is doing well with the potty. She very rarely has pee accidents, and when she does, it's typically because I either ignored her signs or didn't realize how long it had been since she went last and didn't insist on her trying. On the poop? Well, we are working with it. If I am around her, I can tell her signs and usually catch her in time. For some reason, she sometimes thinks it's scary. Thankfully, she isn't afraid of "big potties" out in public. In fact, she has a bit of a fascination with them and likes to always try when we are out at public. I suppose that's better than accidents in public? (In the past 2 weeks, we've actually not had any accidents! And she's been dry over night too! Yay!)
The girl loves dinosaurs and was telling me the other day she wants a "T-Rex cake" for her birthday. She likes to make a "cave" in our fireplace these days and drag pillows and toys in there. (Don't worry - it isn't functional anymore.)  If she wants to have a "party" that normally means just dumping out as many toys as humanly possible - and then questioning later "who made this mess???" She likes to hoard things in tote bags and carry them around the house. Then she'll gather them up and go either on "a trip" or "a bear hunt." There is a lot of talking about hiding from bears with "big green eyes and a fuzzy little tail."
She continues to talk a lot about being a "new big sister" and is so sweet about talking about Healey and picking things out for her and such. I cannot wait to see her in action once Healey is actually here.

Posted by Gail at 1:43 PM
Email ThisBlogThis!Share to TwitterShare to FacebookShare to Pinterest