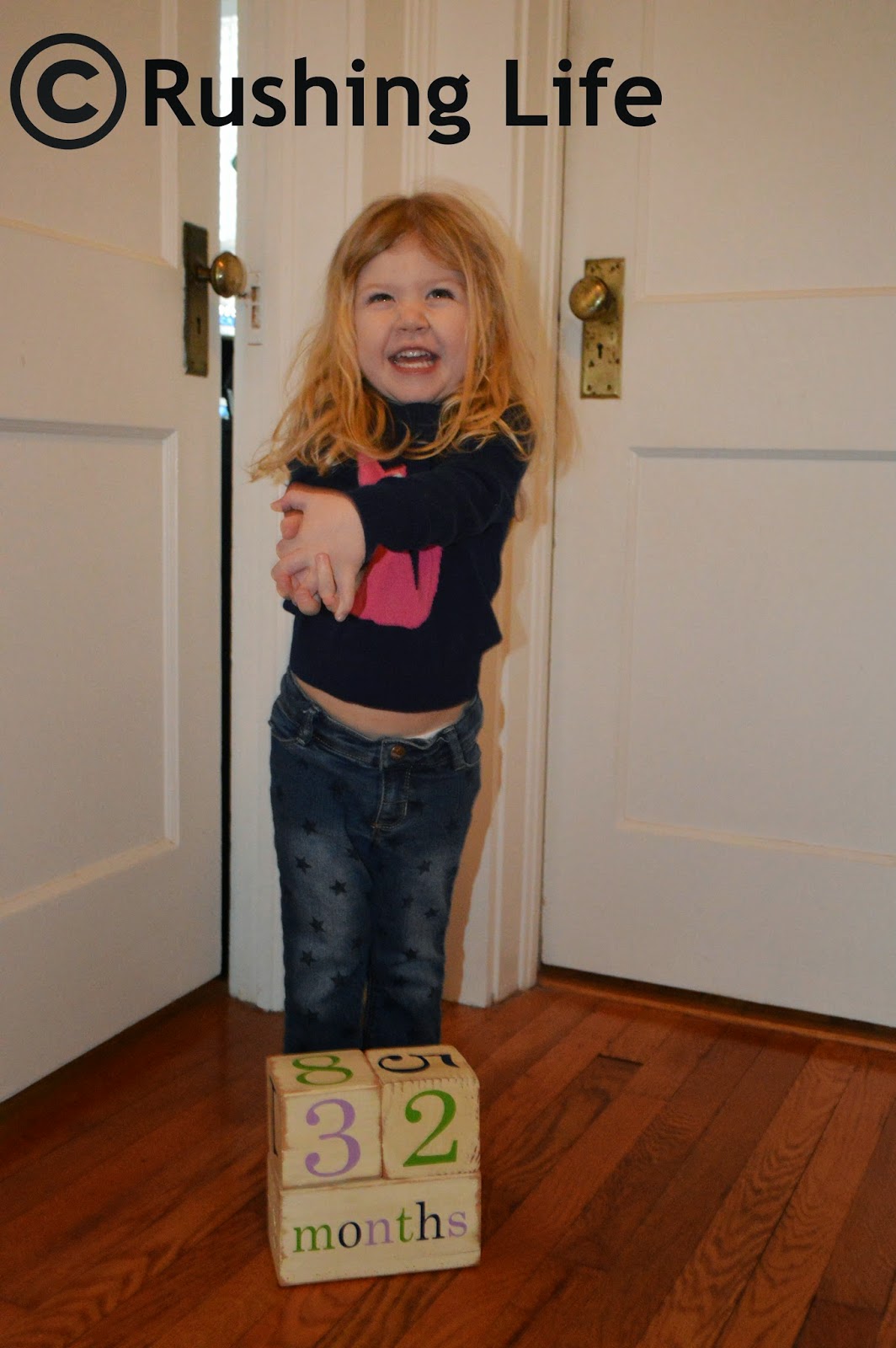 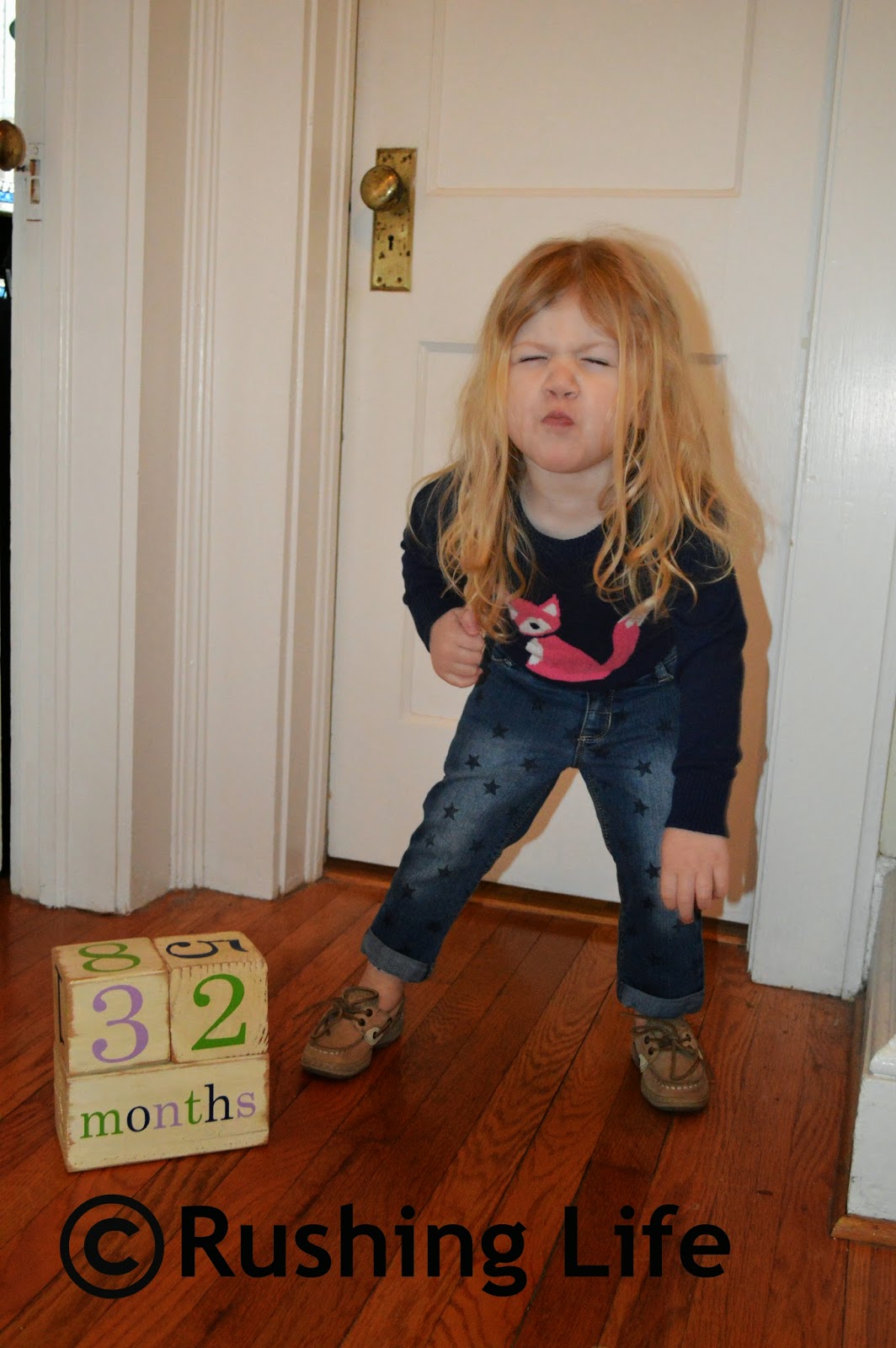 I swear this kid keeps turning more and more into an adult every single day. She came into our room one night, while Puff and I were sitting on the bed, and she's all like, "What you talking about, guys?" Awww.... sweet, sweet girl is getting too big for her britches! On a super random "cute thing she does" note - she calls a piggy-back ride, a "possum ride" because she saw in a book that baby possums ride on their mommy's backs. How adorable!
She is now enjoying a few new shows in the one or two shows we allow her to watch a night. (Or the 209043 shows we watched over the weekend we didn't leave the house to attempt potty training.) She likes "Wild Kratts" and "Mickey Mouse Clubhouse" now (or "glovehouse" as she says).
I posted HERE about her potty training, but thought I would update you a bit on that since I wrote that. The first two days back to school after our boot camp weekend were amazing! She only went in her pull-up once on the first day, and none on the second. She even went on a "big potty" a few times when we weren't at home. Proud does not even begin to cover it! After a week in pull-ups at school, we decided to send her in panties. There were a few accidents here and there (including one on the only rug I didn't think to remove - ugh!) but we are so close. She has even made it several nights and naptimes completely dry and even woke us up one night at midnight to go to the bathroom!
Since Bimmer knows now that she is going to be a big sister to a little sister, she is getting better about talking about Healey and thinking about her. I know it will be a gradual process and it will ultimately be a major adjustment, but she's making little steps that make me happy. She is still trying to grasp 100% the name of the baby, but she definitely knows it's a girl and references her sometimes. She made my heart melt when she was telling me that we need to go to "see Cinderella at her castle" and then told me that we needed to "wait for Healey to get bigger." Eeek! Oh, I hope they are the best of friends! She also just recently asked for a big sister t-shirt that has a zebra on it. Guess I better get stalking Etsy!
She has been learning Spanish at school since she was barely over a year old. She can count to ten and knows body parts and some other random words. One day she came home telling me how to say giraffe and elephant and owl in Spanish. It's amazing how much she retains! Speaking of school, they have created an "older 2s" class and I don't like it. Basically because it's hard for me to swallow that with her May birthday, she was one of the younger kids in her class and so they have advanced all the girls she was friends with (since there was an April birthday cutoff) and now she is the oldest girl in her class with a bunch of much younger girls who are no where near the same level as she is on. Yes, some of the boys she has known all along are still there, but it's still taking this mama awhile to not feel like my pride is hurt that she didn't get to move up a class yet. They all meet up again in late summer when they are in the 3-year old class, but it still stinks. She hasn't said anything to us about it yet, but I know it's just a matter of time.
The worst thing that happened this month? The terrible twos started. It was subtle at first, but now we are full blown. Lots of major tantrums over nothing (like us not helping her spread a picnic blanket out on the ground exactly right) and she has been super whiny. It is definitely testing our patience. Puff gets short with her a lot easier than I do (always has) but even now I am having moments where she is just being such a diva I can't handle it. We have even had some discipline issues at school that have left this hormonal mama in tears. Here's hoping she gets it out of her system before Healey gets here!

Posted by Gail at 7:32 PM
Email ThisBlogThis!Share to TwitterShare to FacebookShare to Pinterest