Operation: Get in Your Crib

The time has finally arrived.
Mommy and Daddy needed their lives back. It was time for Bimmer to get in her damn crib. 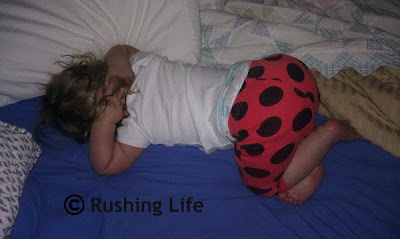 To recap quickly... from birth, Bimmer has been super spoiled in the cuddling-while-sleeping department. She would almost exclusively nap while being held, but at least slept part of the night in her crib until about the 4 1/2 month mark. Then I went back to work. (You can read about our first, horrible, attempt to cry it out HERE.) After that debacle, aka the worst parenting decision we've made, Bimmer has been in bed with us. I set goals on dates on when to make it happen sooner, but then either I would have an insane week at work and be too tired, or Bimmer would be sick. Finally the end of June came. She was 13 months old. It was time. We were doing it. I was committed.
The first night was a disaster.
Puff was out running errands, so I fed her in bed like normal, all snuggled up and cozy with Mommy. Then when she went to roll herself over after her bottle, to snuggle, I stood up and took her to her crib. Now, she's been napping in her crib for about 4 months now, and we always just drop and run. We let her cry (it's usually only a minute or two) and then she's out. Well, for some stupid reason, that first night of CIO, I decided to stand there and rub her back while she tried to fall asleep. Epic fail. Since I was there, she was all like, "Bitch, I know you're there. Why are you not picking me up?" So instead of drifting off to sleep, she ended up standing up, wailing, with her arms reached out for me to pick her up. Broke my damn heart. So, up she went. Back into bed with me. We would try something different the next day. 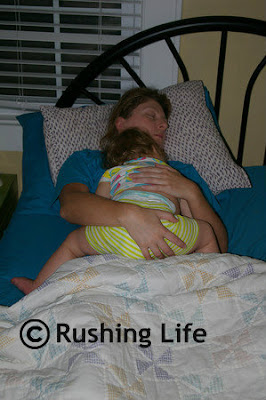 Round 2 went infinitely better. I snuggled up in bed with her, as we have done for her nighttime bottle since she as 8 weeks old, and when she went to roll over to snuggle, she went in her crib. And she cried. For 10 minutes. And then it was silent. For an hour. Then she cried for 5 minutes. We didn't go in to intervene. She slept then for 7 hours. IN HER CRIB. I was doing cartwheels in my head! She woke up a few times whimpering, but went back to sleep in less than a minute. When she cried a different cry at 5:30am, we got her a bottle and changed her poopy diaper. Yes, she ended up cuddling with Puff the rest of the morning, but that was a victory for us.
I could be totally OK with morning snuggles for the rest of my life.
Round 3 started with 10 minutes of crying, followed by a slight pause, followed by more crying thanks to a thunderstorm. When all was said and done though, she was out for the night and slept until 6am. She whimpered throughout the night (which didn't help Mommy sleep very well) but it was a positive move. Round 4 was heaven... she went down without so much as a peep! Yay! And then she slept until 5am, had a bottle, and went back to sleep with Puff in bed until 7:30am. Round 5 yielded no cries either, but she woke at 3am. I gave in after awhile and gave her a bottle, but she went back in her bed. And slept until 8:30am!!!!
It's so exciting to realize that she was ready for this transition, but I'm not sure I was! I miss having her next to me, all snuggled up, or her foot in my face. Or waking up with her next to me. Waking up with her is the absolute best. I know every child and every family is different. Some are lucky enough to have babies who are chill in their crib from the get-go. Other moms I know are struggling every night with a child who wakes up multiple times. I know there were nights I complained about having to go to bed early or sleep with her crawling on top of me to get as close as humanly possible. But I wouldn't change it for the world. I never thought co-sleeping was for me, but it was. It was the perfect arrangement.
I miss her already.
My little girl is growing up.
Posted by Gail at 1:21 PM
Email ThisBlogThis!Share to TwitterShare to FacebookShare to Pinterest

Way to go mama!! We are realizing it's time for Eli to get in his crib now too. He's almost a year and lesbehonest...it kills your sex life to have a baby in your bed! lol He started off in his bed last night be ended up in ours at 1 am until waking up at 9:30. Well, it's a start! You'd think after 3 others this would be easier but I don't think it ever is!!