One thing I wish I had been more prepared for pre-pregnancy was maternity clothes. I hate to shop and I had no idea where to start with what I would and would not need. I heard so many varying opinions, from not needing anything until the third trimester, to needing to stock up on a ton of outfits from the start. So, just in case anyone was interested in my maternity clothes story, here ya go!

I managed to get through the first trimester without having to waver from my normal wardrobe. Thankfully, shirts like these were in style so I wore a lot of them to work as I started to sport a tiny pooch... 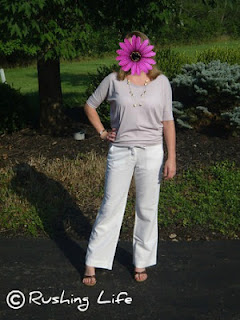 Toward the end of the first trimester, I did have to invest in a Belly Band in order to prolong the use of my work pants. I was down to one pair of jeans that fit by about 16 weeks, but thanks to a friend's Goodwill pile, I was able to score a few size 12 dress pants and a cute black dress that worked great for awhile. Also, a few size Large shirts from her got me well into the third trimester.

Around week 16, I did stock up on a few maternity items... 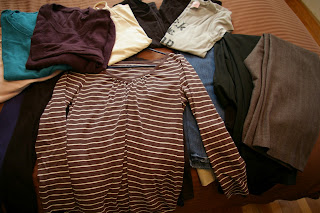 Now, had I continued working after week 16, I probably would've needed to invest in some additional winter items. Also, thankfully, our winter was crazy mild. So my regular winter coat got me through January and we were able to return the $80 coat we had gotten from Destination Maternity. A friend also let me borrow one of her big ol' winter jackets that was even way too big on her, but I never needed it. I did find that the Pea in the Pod dressier clothes fit much better than those from elsewhere. Although the band on their jeans started really irking me after 24 weeks, while the Gap band stayed in place a bit better, since it sat more under my stomach.

While I wasn't working, my wardrobe consisted of my pre-pregnancy pajama pants, lounge pants, and yoga pants. Some were size small, some were medium. And up through about week 26, I was able to wear my size medium t-shirts I had. (Not the girly fit ones, but just normal t-shirts.) Then I had to upgrade to Puff's size large t-shirts, since they were roomier and much more comfortable. I did luck out with underwear too that my ass didn't grow, so I never needed to buy anything new there. I did, however, have to upgrade my bras. I went up 2 cup sizes very early on, so I hit up Victoria's Secret for their t-shirt bras that were like $25 each... one nude, one white, and one black. But at week 29, I had had enough of the underwire, so I hit up Kohl's for a Vanity Fair bra (on sale for $20) that was wireless. And was another size bigger.

At 30 weeks, I did have to invest in some spring clothes, since the weather had already been warm enough some days for me to rock some elastic-band pre-pregnancy work-out shorts. I wanted to find a cute dress, but was having lots of trouble doing so. I finally ended up in the normal woman's section at Target and scored a cute striped jersey kimono-sleeved, empire-waist dress (size medium) that worked and I can still wear post-pregnancy. In addition to that find, I picked up these few things... 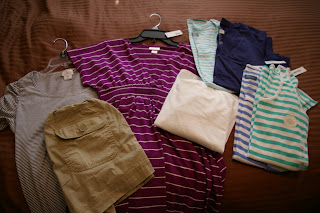 So, my spring wardrobe included:

I also lucked out that a few pre-pregnancy dresses still fit, like this one... 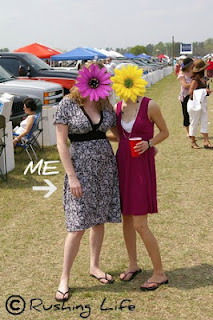 That would be why I needed that new camisole! ::insert grin::

And much to Kimhead's chagrin, my feet did not grow out of my shoes. Not like I had a badass shoe collection to begin with! All told, it wasn't the massive investment I had expected, but that definitely had a lot to do with the fact that from week 16 on, I was a housewife. Now we'll just have to plan for baby #2 to come in the same season so I won't have to start all over again next time!
Posted by Gail at 8:47 AM
Email ThisBlogThis!Share to TwitterShare to FacebookShare to Pinterest

I am still holding out that your feet are going to hit a growth spurt here in the next few weeks and I can inherit all your shoes :)