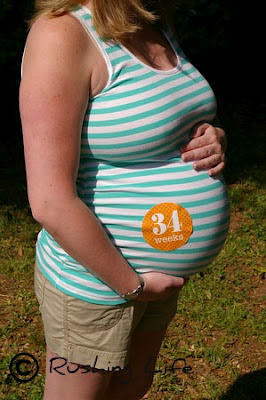 Oy vay! Is this pregnancy over yet? People had told me the last 10 weeks would be the slowest and they weren't kidding. Although, really, I'm not sure if it seems like it's going all that much slower. All I know is that I'm definitely feeling WAY more pregnant!!!
I've finally started the pregnancy waddle. It took me until I hit 32 weeks, but it's definitely here. The culprit? The lower back pain that extends down into my butt and upper leg. Apparently it's normal and the doc's don't really have much insight on how to make it feel any better. Just lots of rounds with the heating pad, which doesn't ever really help. All those things I had been doing that made me feel so productive and useful are about out the window. Grocery shopping is near impossible since it hurts to be on my feet that long and bending and stooping for things is painful too. Not to mention carrying the bags inside the house! Forget Dustbustering the house like I used to do, or any type of yard work. I've even had to nix my daily walks. (Update: In the past three days or so, I've only had the pain in the mornings and have felt pretty good if I get up and going. Here's hoping that trend continues!)
Another fun thing has been the cramps in my calves. I've had two or three in the past two weeks and they are SOOOOO not fun! Now I understand why professional athletes writhe around in pain on the field for "just a cramp." I literally moan out loud they hurt so bad. And they linger too for a few days, which is odd. It makes shaving my legs in the shower a real doosy of a chore. If it were just a smidge colder, I wouldn't even bother trying! My poor feet are neglected too, since I've been hesitant to spend money on a pedicure. But Puff has an unhealthy fear of feet, so he wouldn't touch them if his life depended on it!
In important doctor news, I went in last week at 33 1/2 weeks and they mentioned again that Bimmer seems BIG. When they feel around for her, there's not much fluid in there... mostly baby. So, we go back April 25th to feel and measure again and will most likely do an ultrasound to get a better idea of her size. If she's pushing 8 pounds (or more) as they suspect she might be (really?!? already?!?) then we will have to make a decision about inducing so we could avoid an emergency c-section later. On the bright side? She's head down, right in position!
Posted by Gail at 8:18 AM
Email ThisBlogThis!Share to TwitterShare to FacebookShare to Pinterest

The last trimester is harder than anyone ever tells you. Everything hurts! Sleeping is a joke! Those little baby nudges feel like they could break a rib now! But hang in there! The marathon is almost over!!!

Welcome to SPD! Symphsis Pubis Dysfunction. Wearing a belly belt helped me tremendously, as it kept my pelvis in place and less likely to aggrevate my joints/nerves. Do you keep a pillow between your knees when horizontal? AND I got the calf cramps w/ Claire. Potassium helped a lot, as did pointing my toes to my nose during an attack. This was Martin's advice, and during the night, he would actually take my foot and bend it upward for me as it hurt too much to do anything on my own. SUCH a relief. Of course, there then comes the point where NOTHING helps, and you just grin and bare it for the baby. *hugs* It will be over soon!! :)