I know I promised no more decorating blogs, but guess what?!?! Our bathroom makeover is done! It happened a lot faster than I expected, which is always a good thing. And boy is it a good thing! The giddy giggles I've been making for the past week have probably been giving Puff a headache.
As I've mentioned before, I fell in love with The Bungalow very early on. With the exception of the plaid wallpaper in the kitchen and the red paint in the dining room and bathroom. I've grown to ignore the red dining room (but plan to paint it in a few years) but that glaringly dark garnet paint in the bathroom just made me crazy. The room is so tiny that it just sucked up all the light and made it a depressing, dingy place to hang out. Oh, and that horrific light fixture! I started the makeover a few months ago with a crisp white shower curtain and new bronze curtain rod & rings. It helped, but it wasn't enough... 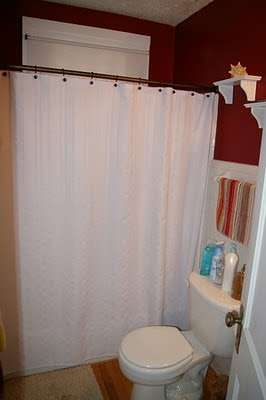 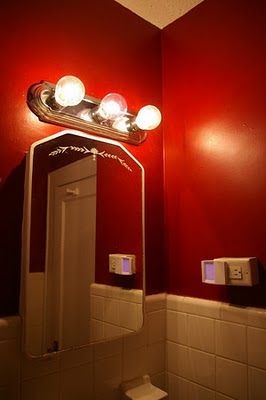 It needed to be updated. Right? So... when we had a realtor come last fall to scope out the house to give suggestions on ways to make the house more appealing, she busted out the term "Sherwin Williams Intellectual Gray." And I was hooked! It was the perfect neutral and a great compliment to what we already had in the house. (Like the gray in our new hallway rug from West Elm and the gray in our pillow shams and lampshade in the master.) Plus it made it feel much more modern!
Once the bath was painted (oh yeah, and that popcorn ceiling was removed) I stood in there every chance I could. Why? Because something was missing. I just couldn't figure out what it was. Ultimately, it clicked to get the new light fixture (which is hung upside down so as not to hit the medicine cabinet) and a pop of color with a new shower curtain... from West Elm, of course. The neutral towels & rug still worked fine. And, as much as I hated to admit it, the Asian inspired artwork didn't look as terrible with the shower curtain as I had hoped.
What do you think??? 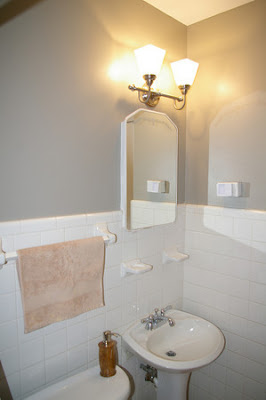 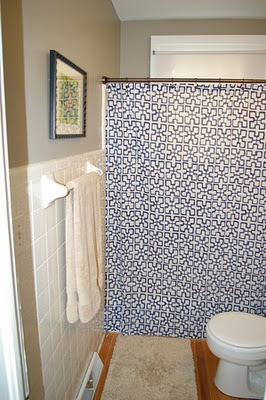 Posted by Gail at 8:16 AM
Email ThisBlogThis!Share to TwitterShare to FacebookShare to Pinterest