You know what really makes your overwhelmed life even more awesome? 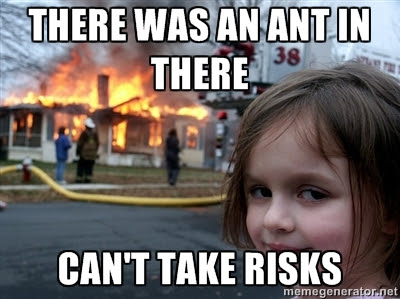 It started right after Healey was born. We noticed a handful of ants coming in from around our kitchen window. Nothing a little Raid couldn't handle. Case closed.
Or so we thought.
Early last week, I noticed a few more. More Raid. Case seemingly closed. Again. Thursday night, I noticed more. Friday morning, even a few more. So I texted Puff early Friday morning that we needed to get pest control to come out and handle it. At this point, the ants were only around the window and above the sink, so no harm done. Pest control couldn't come until Monday.
Cue 7:30am on Saturday morning when we had all gotten up early to get ready to head to Bimmer's haircut appointment. The ants were no longer coming in at the bottom of the window frame (where they had been all along) but now there was a trail from the top... straight over into the first kitchen cabinet.
SHOOT ME NOW.
Puff made it extra special by feeling the need to point out that he never had ants before I moved in.
SHOOT HIM NOW.
Thankfully, that first cabinet is just plates and sippy cups. Killed ants. Moved along. I was opening each cabinet door like there was going to be a giant blood-thirsty rat ready to pounce on me. Yup... more ants in the next cabinet. The cabinet with the baby bottles, formula, and baking stuff like sugar and random things like peanut butter. Thankfully, everything was sealed. Killed ants. Sprayed Raid. Moved along. Last cabinet before the stove? Only a few ants on the bottom shelf with the spices. Only a few on the second shelf with the pastas. (Even though one box wasn't closed all the way.) Not many on the top shelf with the medications. Thank goodness.
BUT WAIT.
I shifted the medicines around and then a flood of ants came pouring out of a bottle of Puff's old cough medicine.
Remember when he insinuated that it was my fault we had ants???
The rest of Saturday, just one or two here and there. We were fine. Sunday, all day, pretty much fine. Cue 1:30am last night. There was now a trail coming from the OTHER side of the cabinets toward our cabinet with glasses in it. I didn't think too much of it, because I knew there wasn't any food in there.
But do you know what was in there???
A travel coffee mug that Puff thought was "clean" just because he ran water through it. Never mind the leftover coffee remnants that were around the edges and in the lid.
Do we know how many times I have told my husband that "cleaning" things without soap is not really cleaning? I believe I had told him at least twice YESTERDAY.
But what do I know???
The bug guy was supposed to be here at 9am. It's now past 9am. I have a screaming baby and a kitchen that is covered by things outside the cabinet. Oh yeah, and I haven't had time to shower yet either. So I stink.
Fucking ants.
﻿
Posted by Gail at 9:06 AM
Email ThisBlogThis!Share to TwitterShare to FacebookShare to Pinterest