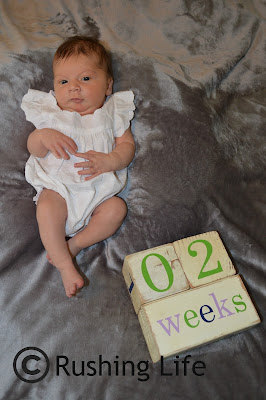 I will probably repeat myself nearly every week when I express this sentiment... but how is this baby already this old?!? I know I was rushing the end of my pregnancy, because I was so uncomfortable and ready to have Healey on the outside. But now that she's here? Even though I don't love the newborn stage, I find myself wanting to just soak up every single second of it. I want to snuggle her through every nap and whiff up every tiny little scent. While I am excited about the future and all the things we'll be able to do more easily with her once she's older, I am also trying to relish in the fact that each of her firsts are going to be the last of those firsts for our family. Since she is our last baby, I'll never hold my own 10 day old daughter ever again. So I want to make the most of these fleeting moments, because I know all too well with Bimmer, that before I know it, she'll be a little person.
At 9 days old, we had our photographer in town from The Fort to do her newborn photos. She was a champ! I cannot wait to share them with you once we get them back. The few I saw straight from the camera were amazing and capture her just how I know her to be at this stage... asleep. Ha! Yes, she is still sleeping like crazy, but I've found the flaw in mine and Puff's parenting... we prefer to snuggle the babies to sleep and hold them all night long if we have to (which I've done multiple nights in a row) than have them cry. I'm assuming that's how we ended up co-sleeping with Bimmer. I have been trying to put her down more for naps, which sometimes works out and sometimes doesn't. (My general overall post-partum weepiness doesn't help... Again, I want to pocket all these sweet tiny moments, so if Healey prefers to nap on my chest on the couch for 2 hours, then that's what we're going to do.)
At 10 days old, we had a follow up doctor's appointment. Her jaundice hadn't gotten any worse, so they were pretty confident it had plateaued. I could tell a difference just in looking at her that it was getting better, but they tell us it could take a few more weeks before it goes away all together. As for her heart murmur, we saw a different doc this time, and it took him a long time to be able to even hear it. But he finally did. I had hoped it was something she would grow out of in a few days, but apparently not. It was reassuring though to hear the doctor tell us that they rate murmurs on a scale of 1 to 6 and hers is barely even a 1. He is referring us to a pediatric cardiologist who should be in touch soon to schedule an appointment and possibly an ECHO. I'm hoping it is probably nothing and the doc told us that if he was in Vegas, he'd put his money on her being 100% fine. But again... I'm her mama, so to hear anything like that is just plain scary.
We have had more visitors lately, which Healey loves since she gets to be all snuggled and cuddled. She is eating like a champ, fighting some occasional stomach discomfort, and is sleeping like a rockstar. She's a light in our lives! What more can I say???

Posted by Gail at 1:05 PM
Email ThisBlogThis!Share to TwitterShare to FacebookShare to Pinterest