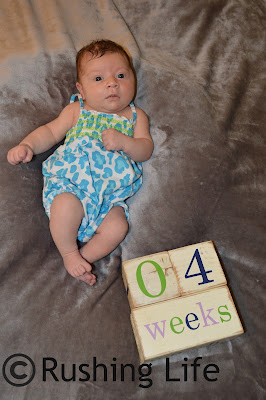 Oh, my spoiled spoiled baby!!!!
I'm not sure if it was the long holiday weekend, or if just by coincidence a growth spurt happened at the end of 3 weeks, but gosh darnit this kid has become super spoiled. Like, more so than the having to be held to sleeps type of spoiled she was previously. Puff carried her around all that weekend, whenever she was awake and fussy, and lo and behold, now she expects to be carried around all the time when she is awake. It was like immediately at the end of 3 weeks, she decided she was not going to go down in her bed anymore and she was not going to be content to be in her swing or Boppy or anything. I've been researching some "cry it out" techniques (which we all know we didn't have much luck with for Bimmer) but they just all sorta break my heart. Yes, I would love to be able to put her down to get something accomplished during the day. She's lucky she's cute.
I've taken to calling her "Princess" or "Diva" a lot. I suppose that's better than Bimmer's nickname of "Sugar Butt."
Thanks to "Sugar Butt," Healey had a bit of congestion this week. Nothing major, but enough to be noticeable and to make her a little more fussy too. Just had to suck snot out a few times. And pick a dried booger or two with my fingernail. Nothing I couldn't handle. ::gag::
This past week, I've been more anxious to get out of the house, so that has meant Healey has been venturing out a lot more as well. We've hit up some parks, some restaurants, the grocery, and some stores in town as well. I've noticed that she is not super keen on being in her car seat. And that is super worrisome to this travel-nut over here. Here's hoping she'll start to get more used to it the more often it happens.
One night, I went into the bathroom while Puff was giving Bimmer a bath and I was holding Healey. Bimmer asked if we could take Healey back. If she hadn't been smiling when she said it, it probably would have broken my heart. Instead, we asked her where we should take Healey. Bimmer's response? "Everest." How does that 3 year old even know about that??? Probably because she's my child! A few days later though, she changed her tune. Out of the blue, she was snuggling Healey and said "I love you, Healey." Then she looked at me and said, "Let's keep Healey. Let's not take her to Goodwill." Sounds like a plan, kid. Sounds like a plan!

Posted by Gail at 8:45 AM
Email ThisBlogThis!Share to TwitterShare to FacebookShare to Pinterest