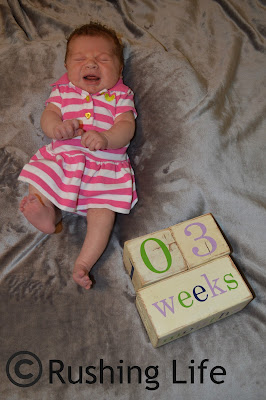 Bimmer was screaming in her 3 week photos too. Must be a rough age.
My growing girl is slowly becoming more alert and stays awake for longer periods of time. I think one day this week, she was actually up for about 2 hours! That's definitely a record for her. She is becoming more inquisitive too... preferring to be walked around the house and outside, and trying to hold her head for longer if she's laying on your chest. She is eating 3 ounces at every feeding, and has kept pretty strong to an eating every 3 hour schedule. Except once a day there's always a 2 to 2 1/2 hour window, for whatever reason. It's never at the same time either. Oh well... as long as my girl is getting what she needs!
We are still working on the sleeping in her bassinet. She seems to do really well for me in it during the day for naps, sleeping at least half the time in it, but at night? Forget it. She must sense that Mommy is right there next to her and she knows it's better to sleep in Mommy's arms. I do always have the best of intentions with those nighttime feedings... hold her for a few minutes after she finishes her bottle and then put her down. But I always fall asleep. Or she doesn't fall asleep. For the most part, she isn't awake too terribly long in the middle of the night (never more than about 45 minutes, including the feeding) and if you're holding her, she's content to be quiet and just stare at you... or wiggle around and smack you in the face. For as sleepy as she has been, whenever she is awake, she loves to be laid down and just to wiggle. She flails all around both her legs and arms. She hates to have a blanket over her legs and always kicks it off. (Just like her sister, neither of them liked to be swaddled ever after leaving the hospital. Maybe I'm doing it wrong???)
She is very clear that she doesn't like to sit in a dirty diaper (whereas her sister never seemed bothered) and she is also very intent on finding her fingers and sucking on them. I can't decide if I prefer her to stick with a pacifier or her fingers. I suppose the pacifier, since I can ultimately get rid of it! I definitely think at this rate, she's going to be one to want to keep that security for longer than Bimmer ever did. We hadn't taken Healey out in public much the first two weeks of life (just because of logistics, more than anything, with Puff's work schedule, my surgery recovery, and the added factor of having to chase Bimmer) but we finally started to venture out more this week. She went to multiple restaurants (including a local Mexican restaurant, McAlister's, and then Hooter's on 4th of July) and she did excellent. Even if I did have to change a poopy diaper in Red Lobster right as my food came. I definitely am not anywhere near ready to take both girls out by myself! That is very evident. I don't think I will even attempt that until after I feel physically back to normal.
Her umbilical cord fell off, but not all of it. So we are monitoring that, which means she still can't get a "real" bath. Girlfriend loves to get her hair washed though. She goes into a bath coma when you run her head under the running water. And I'm not sure I mentioned this previously, because it took us a few days to notice, but she does have the slightest little dimple on her right cheek. Just one. Just like her big sister. Just like her great-grandmother.

Posted by Gail at 12:28 PM
Email ThisBlogThis!Share to TwitterShare to FacebookShare to Pinterest