In a recent discussion with some friends, they labeled me the "creepy" mom since I like to still lay with Bimmer as she falls asleep and snuggle her.
I can't help it - she's the cutest and snuggliest thing around. Puff is a laughable second option.
As my long-time readers are well aware, we became unintentional co-sleepers pretty early on, and then had some difficulties with the transition to her crib. I wrote earlier this summer about moving her to her big girl bed. (HERE) It became apparent in September that Bimmer was ready for a change in her bedtime routine. For a few months, I had been laying with her while she took a bottle and then I stayed with her until she fell asleep - often falling asleep with her myself. Then, I would move her to her bed whenever I woke up (usually around midnight). It was working, but it was getting more and more difficult for us to get Bimmer to fall asleep.
There were lots of nights of laying with her, trying not to laugh, as she would put her face right in front of mine and giggle. Or tell me "Daddy's stinky. You need get up and go wash him." Oh - that kid. 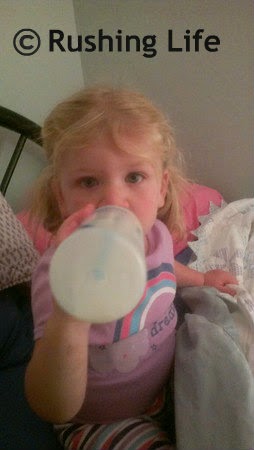 That's the last photo I have of Bimmer with her bottle. I always thought she looked so sweet holding it, but I knew the end was nearing. We were slowly throwing them away as they got yucky and we were pumping up the idea of a "big girl cup" as much as we could. Finally, after coming back from our trip to Hilton Head (HERE) we made the call to get rid of the bottle for good. We took her to Toys R Us, let her pick whichever sippy cups she wanted, called them her "Night, Night Cups" and that was it. I had hoped she would want one more night of snuggles with her bottle, but she wanted her new cups. And that was that - she never once asked again for a bottle. (In our defense, she had been off a bottle during the day since she was one, and off a morning bottle since about 18 months. That nighttime bottle was more of a selfish vice for me - it was a few minutes of sweet, snuggle time!)
Now we are working on the bedtime routine. In early October, I noticed that if I left the room after she had her milk, she was content to let herself fall asleep. And it was a lot quicker than if I stayed in there with her. It also afforded me and Puff some much-needed time together - to talk or watch TV. That adult time had been sorely missing since she was born, and it was nice to finally figure out a way to get it back.
We are still moving her from the full-sized bed in her room to her bed when one of us want to go to sleep (since we still don't like sharing a bed...lol) but I am contemplating the timing of just letting her stay in that bed. My hold up on making that transition? (Which would be a super easy transition for her - and much preferred probably.) I don't want to have to go back to sharing a bed with Puff.
So, for now, it is working. No more bottles. No more fights at bedtime.
My sweet girl is growing up. Pretty soon, she will just put herself to bed all together and she won't need that sippy of milk and snuggles from Mommy.
Nope... can't even think about it. Not ready for that.
Posted by Gail at 5:14 PM
Email ThisBlogThis!Share to TwitterShare to FacebookShare to Pinterest

It's so hard when they start transitioning from baby to big kid! We are going through that right now with Eli. He didn't need his changing table anymore so we moved that out of his room. He's getting closer to potty training so good bye diapers! And pretty soon we'll try the toddler bed again and see if we succeed this time. His nursery is looking less baby and it's killing me! I'm right there with ya momma!