Every year in August, Bimmer's daycare takes a few days "off" and closes down so that the teachers can have two in-service days. Well, they goofed me up this year and sent out dates for mid-month and then a few months out, changed their minds and decided a five-day Labor Day weekend sounded better. Oy! Cue Gail's scramble to change days off work and switch hotel reservations! I had originally hoped to go to Boone, NC, for the trip, but that got scratched when the original dates fell over App State's move-in weekend. After a lot of hemming and hawing, we settled on a trip to Helen and Dahlonega, Georgia.
I know, right? Who goes there?
We do. 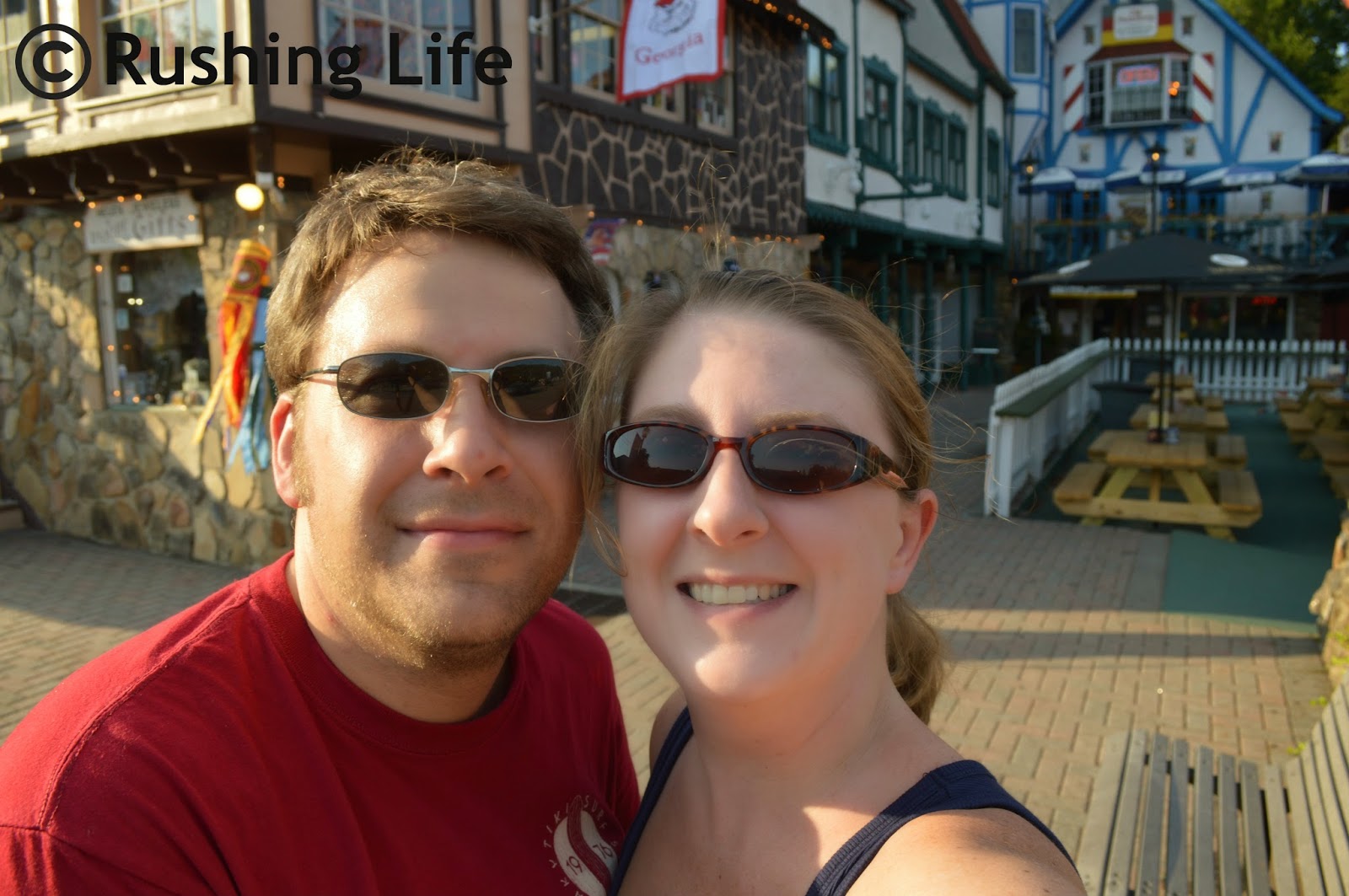 OK, let me back up and start at the beginning. Our first stop was Toccoa Falls College to see, well, um... Toccoa Falls. The path was gravel and stroller-friendly, but we let Bimmer walk it herself since it was such a short walk. She was excited to see the "big waterfall" and look for lizards and butterflies at the base. We had it almost to ourselves, which is always a plus in our book! 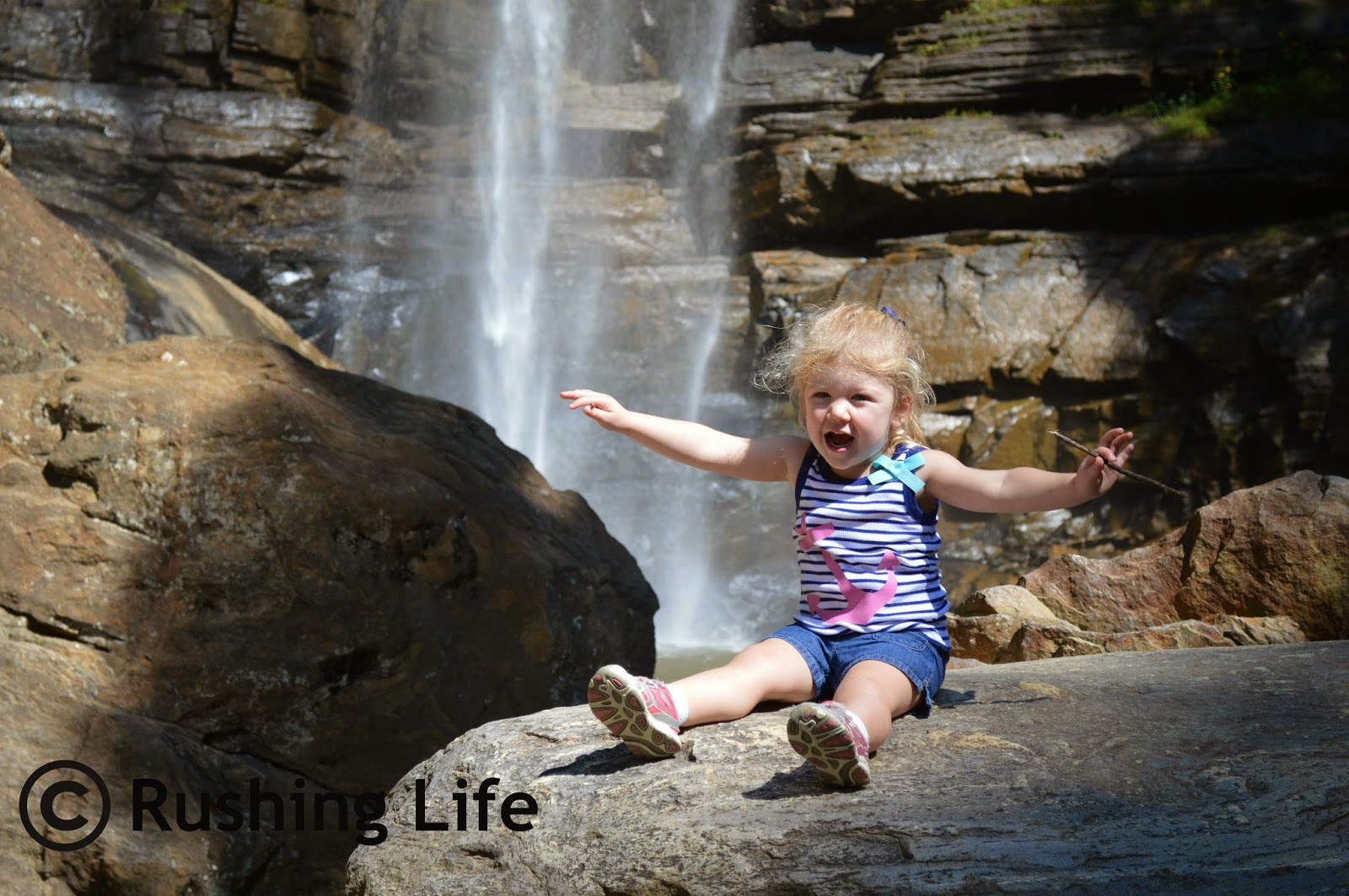 We stopped for lunch in downtown Toccoa. It was a super tiny town with not many options (outside of fast food) so we had lunch at the Cornerstone Grill. I forgot how small towns work for a second and was surprised when we walked in and the entire restaurant turned and stared at us! It also probably didn't help that I was in short shorts and a tank top in a conservative town. Whoopsies! From there, it was on toward Helen. You should note that none of these places are super easily accessible to the highway. We're talking lots of state routes and roads with just one lane each direction. And you don't always have cell reception or GPS!
We opted to drive past Helen and go to Anna Ruby Falls. We had promised Bimmer an even bigger waterfall! (Travel note: To get to the falls, you have to drive through the Unicoi State Park. There is a fee for that park, but if you're just going to the falls, you can tell the guard and then you only have to pay the fee at the falls at the top of the mountain.) 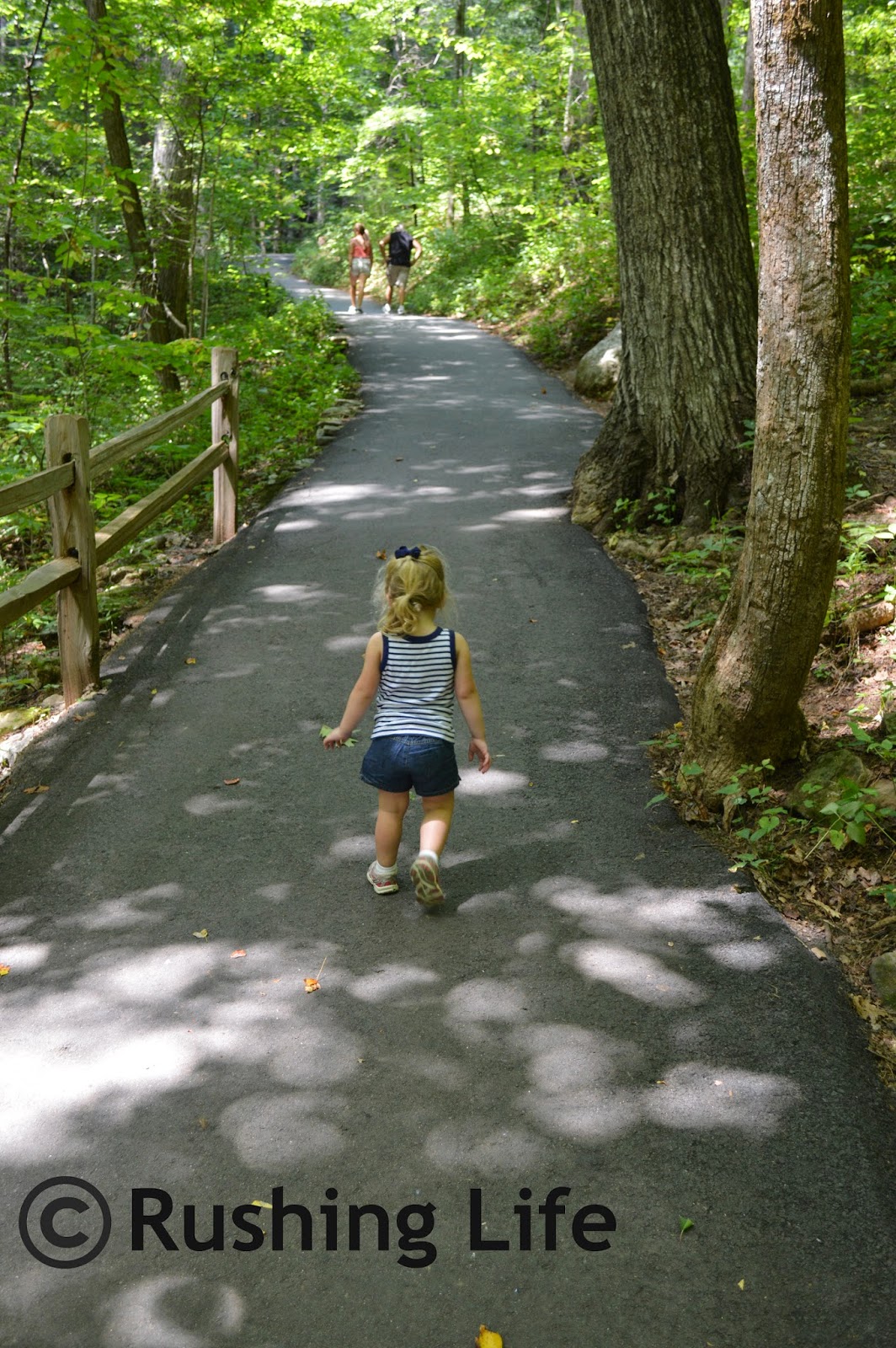 The hike was HARD!!! It was about 1/2 a mile, but it was all straight uphill. Thankfully, it was paved and we were able to take the stroller. We would have been in a world of hurt had we not. There were about 10 people at the top of the hike, which seemed like a lot for us since we normally have waterfalls to ourselves. The parking lot had seemed pretty empty, so I can't imagine what it would be like on a busy day! 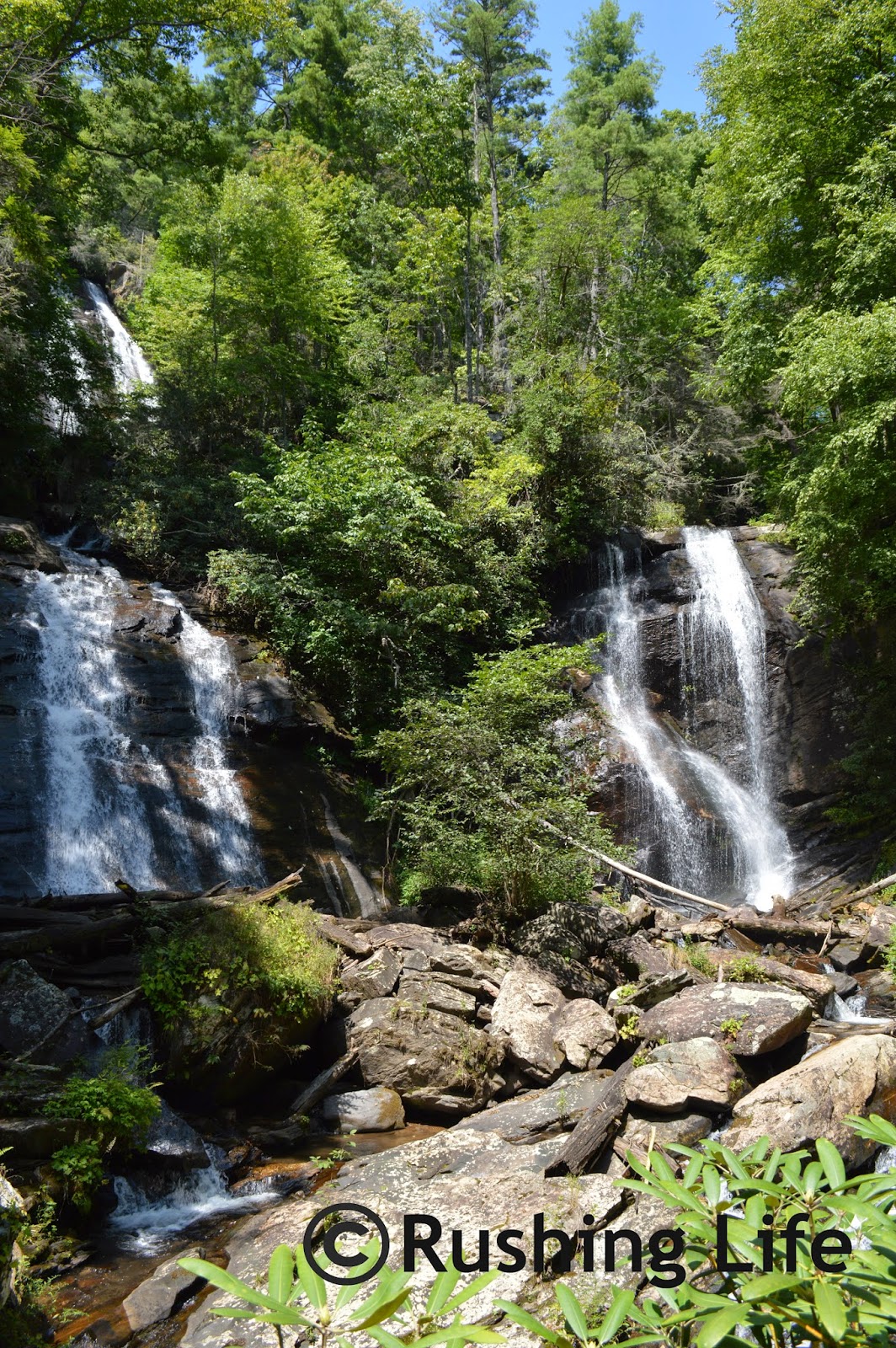 Late afternoon, we finally made our way into Helen, Georgia. We stayed at the Hampton Inn (since lodging options were slim pickings for this hotel snob) and it was fine. The location was actually great, since it was within walking distance to everything downtown. We strolled along and looked in all the cheesy tourist shops and snagged a beer stein magnet for our collection. We had dinner outside overlooking the river at Café International. It was fine, but it was our choice because of the river view. We hope to go back in a few years and take Bimmer tubing on the river. It looked so fun! 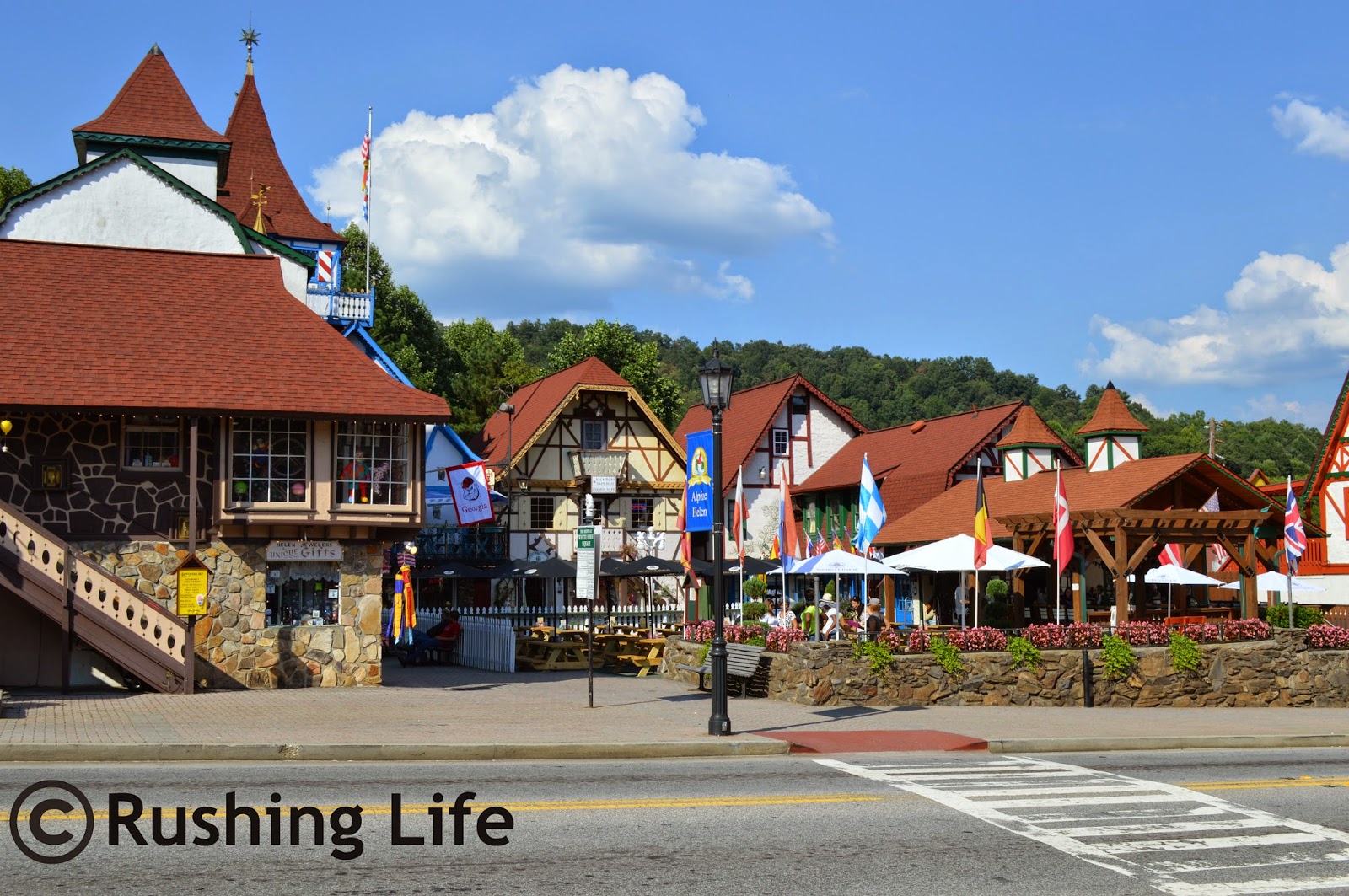 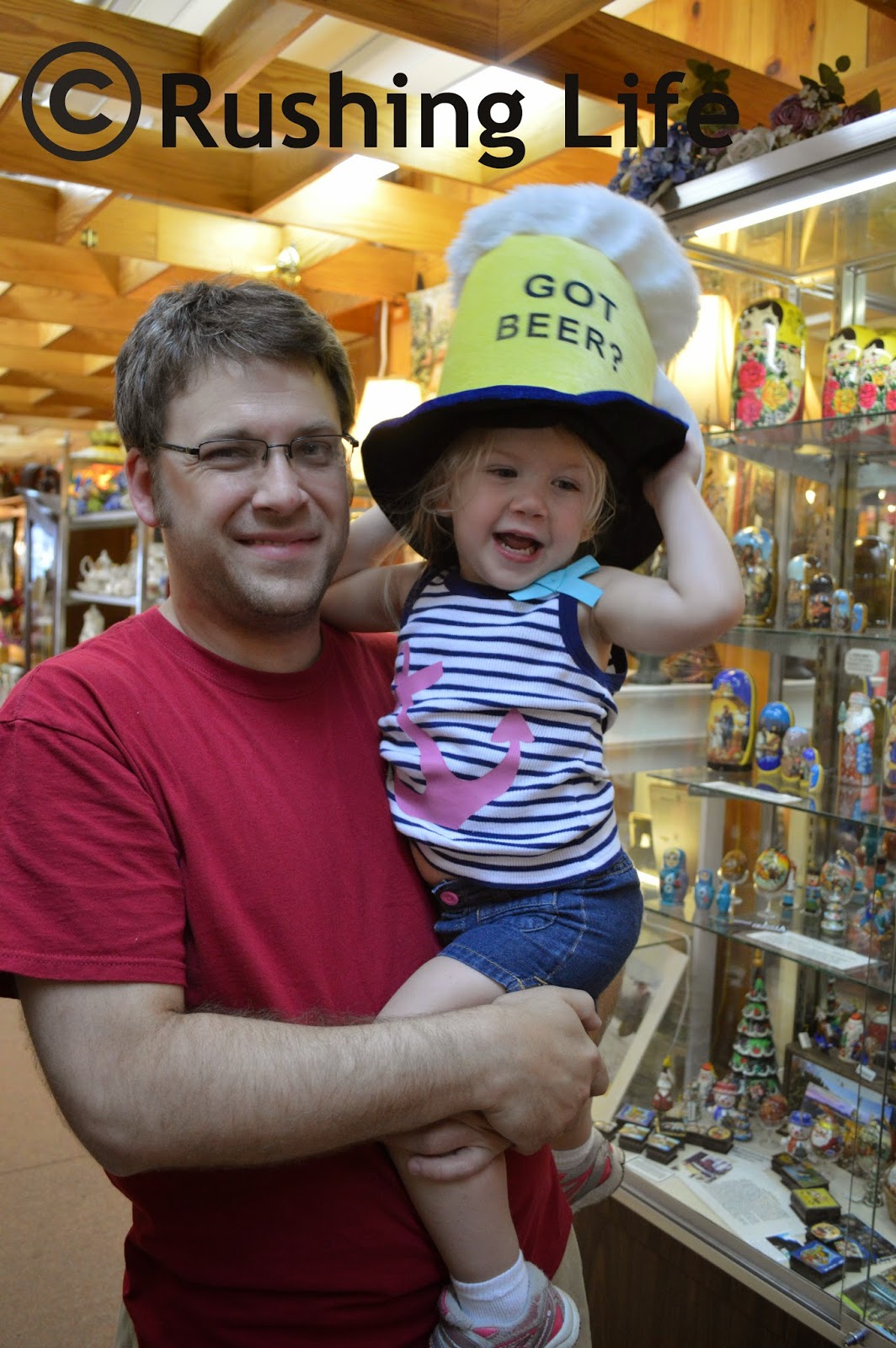 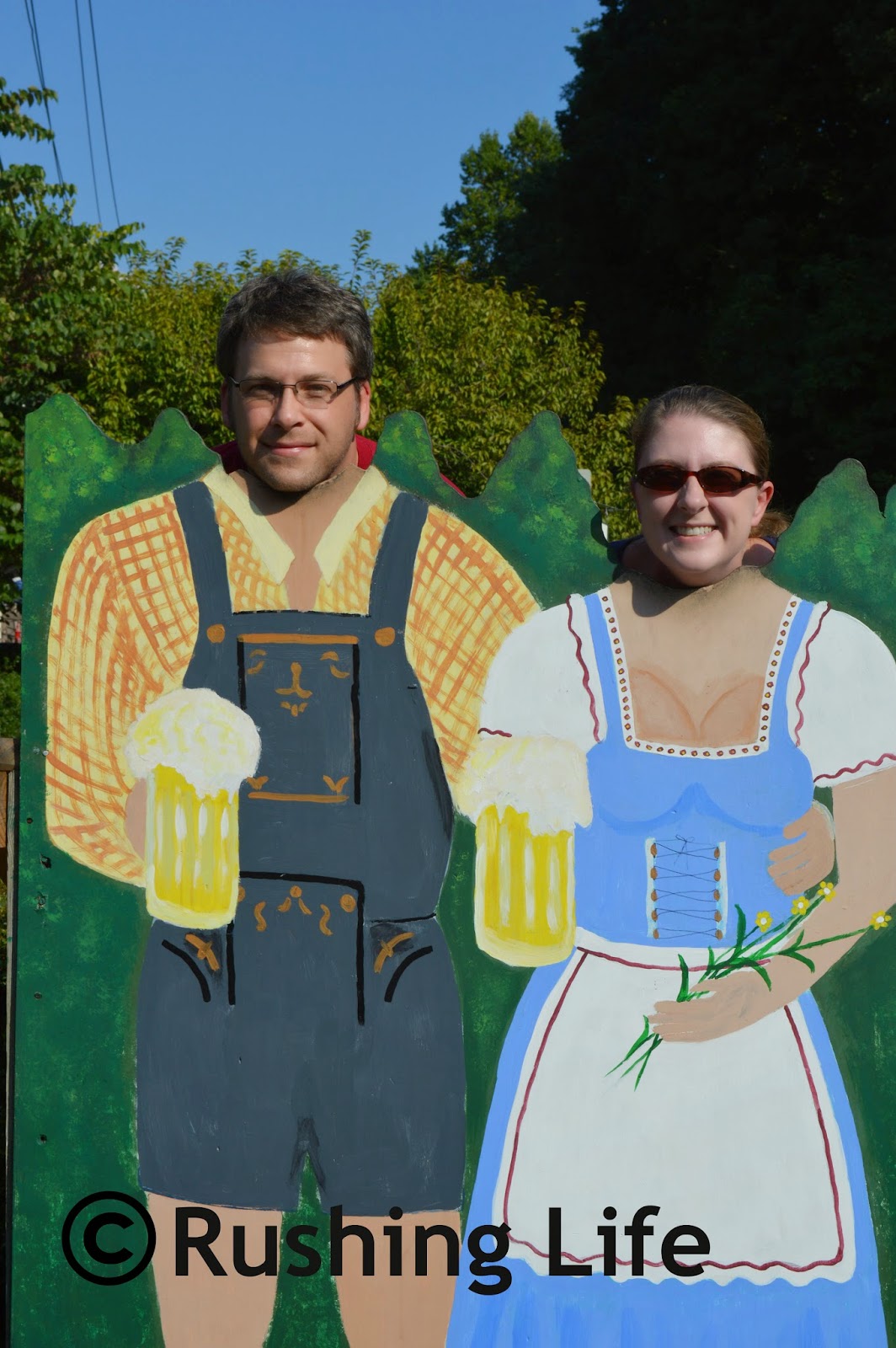 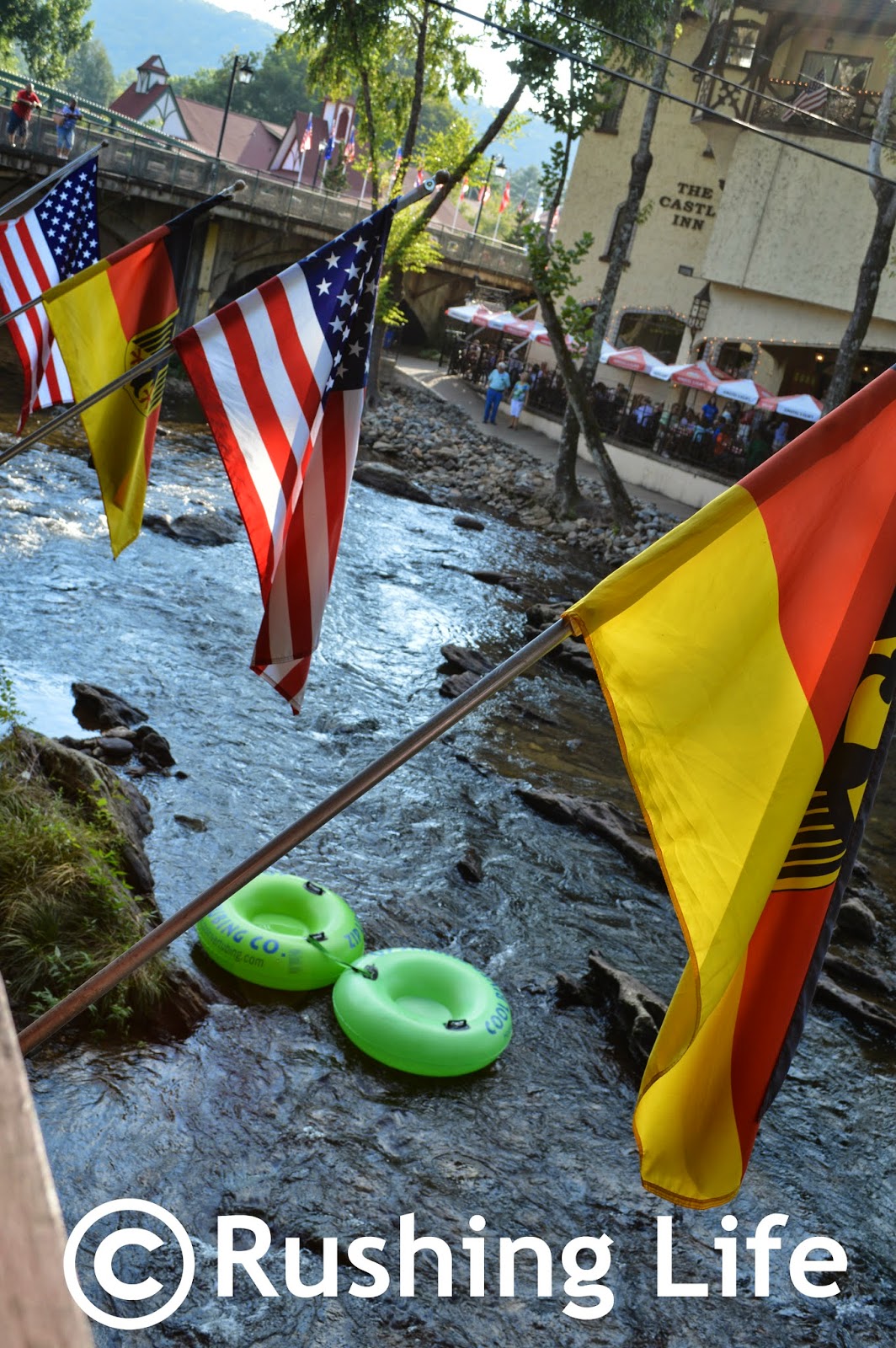 We wrapped up our evening with a stop at a candy store for some homemade turtles and a swim in the hotel pool. Bimmer is getting to be such an adventurous swimmer. She even jumped in to start without either of us in the pool! Thankfully, she had her swimmies on already!
Saturday morning, we were going to go to Hofer's for breakfast pastries, but there wasn't a parking spot to be found, so we headed on toward Dahlonega. It was only about a 45 minute drive, and it was just mid-morning when we got there, so we went on past town to Amicalola Falls. It was a good half hour to the falls and the welcome center was PACKED when we got there. We opted to not register, since we weren't really going for any big hike, and went straight to the parking at the bottom of the hike to the falls. Puff had told me it was only 1/3 mile to the falls (and he swore he had done it before and it was easy) so we left the stroller in the car. Um... not our wisest decision. 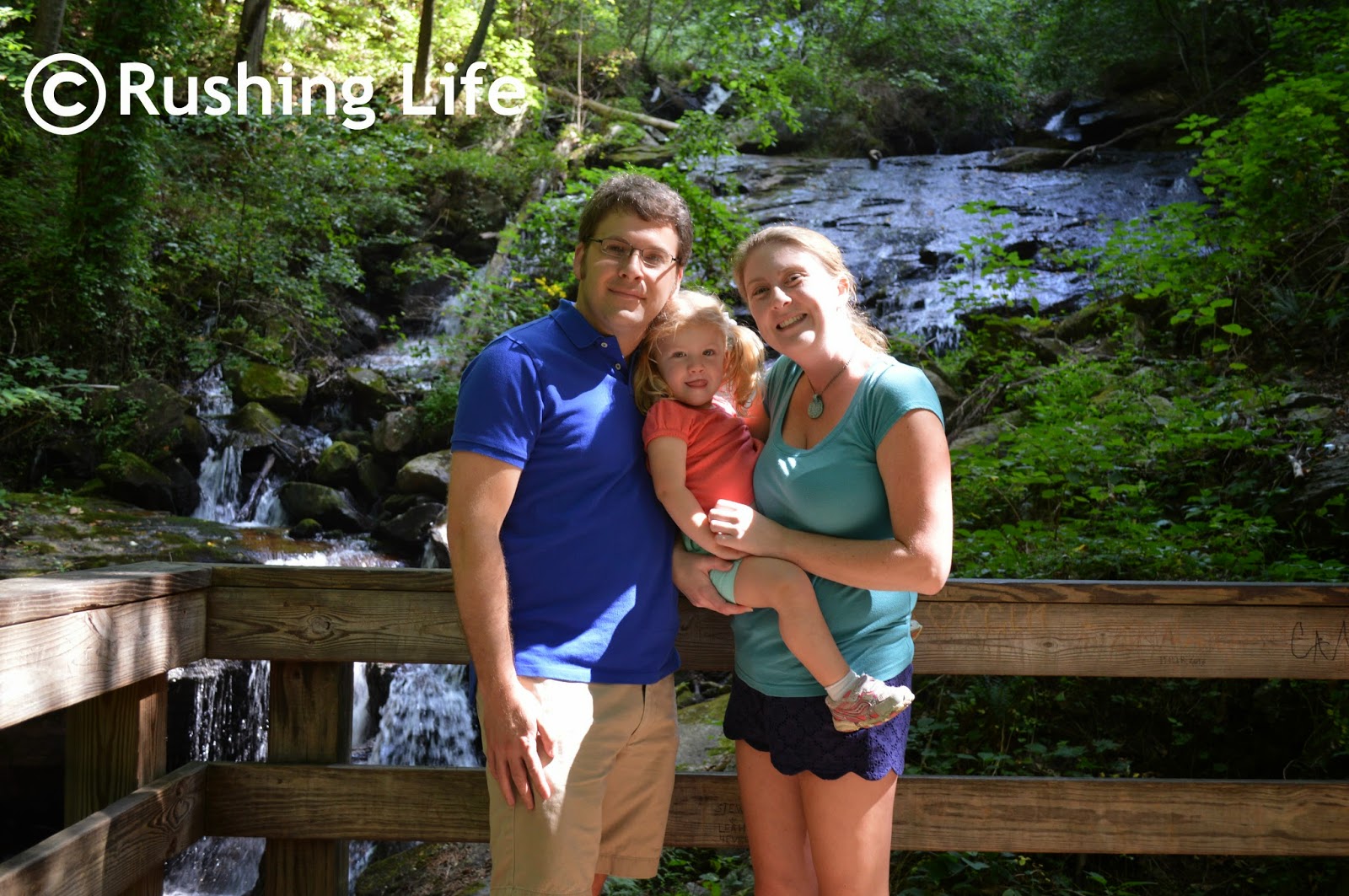 The hike was definitely more difficult than Puff had let on. Especially with a toddler that we ended up having to carry some of the way. We eventually got to the lookout point and there was a sign that said "Difficulty: Strenuous: 175 steps." Um... no thanks. I think Puff was disappointed, but there was no way I was able to carry Bimmer up that big of a staircase!!! So we opted to get back in the car and drive around to the top of the falls. (Travel note: There was a stop halfway up the mountain with an ADA accessible viewing point that probably would have been a better option for us to view the falls.) We did go to the very top of the falls and looked over there and then headed to the lodge for lunch. It wasn't the best food, but it had an awesome view of the mountains and the timing worked out well for us. (Plus, we managed to get the lunch for free since Puff's salad had a big ol' hunk of hard plastic in it!) 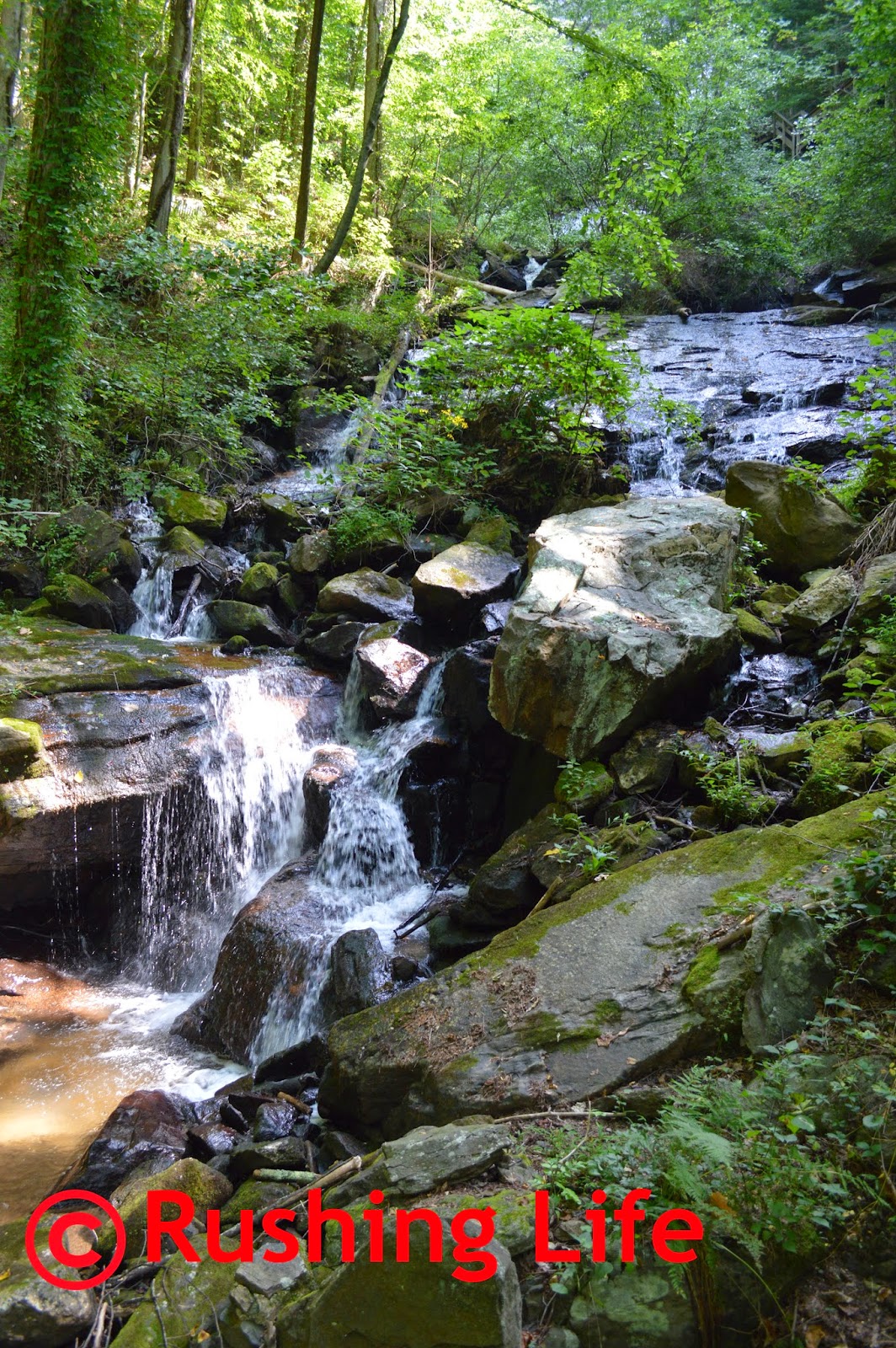 Eventually, it was time to get our roll on and get back to downtown Dahlonega. The town was super cute! We spent some good time walking around checking out all the shops and town square. I will say, I found myself wishing Bimmer wasn't with us. Strolling and shopping just isn't the same when a cranky two year old is in tow. 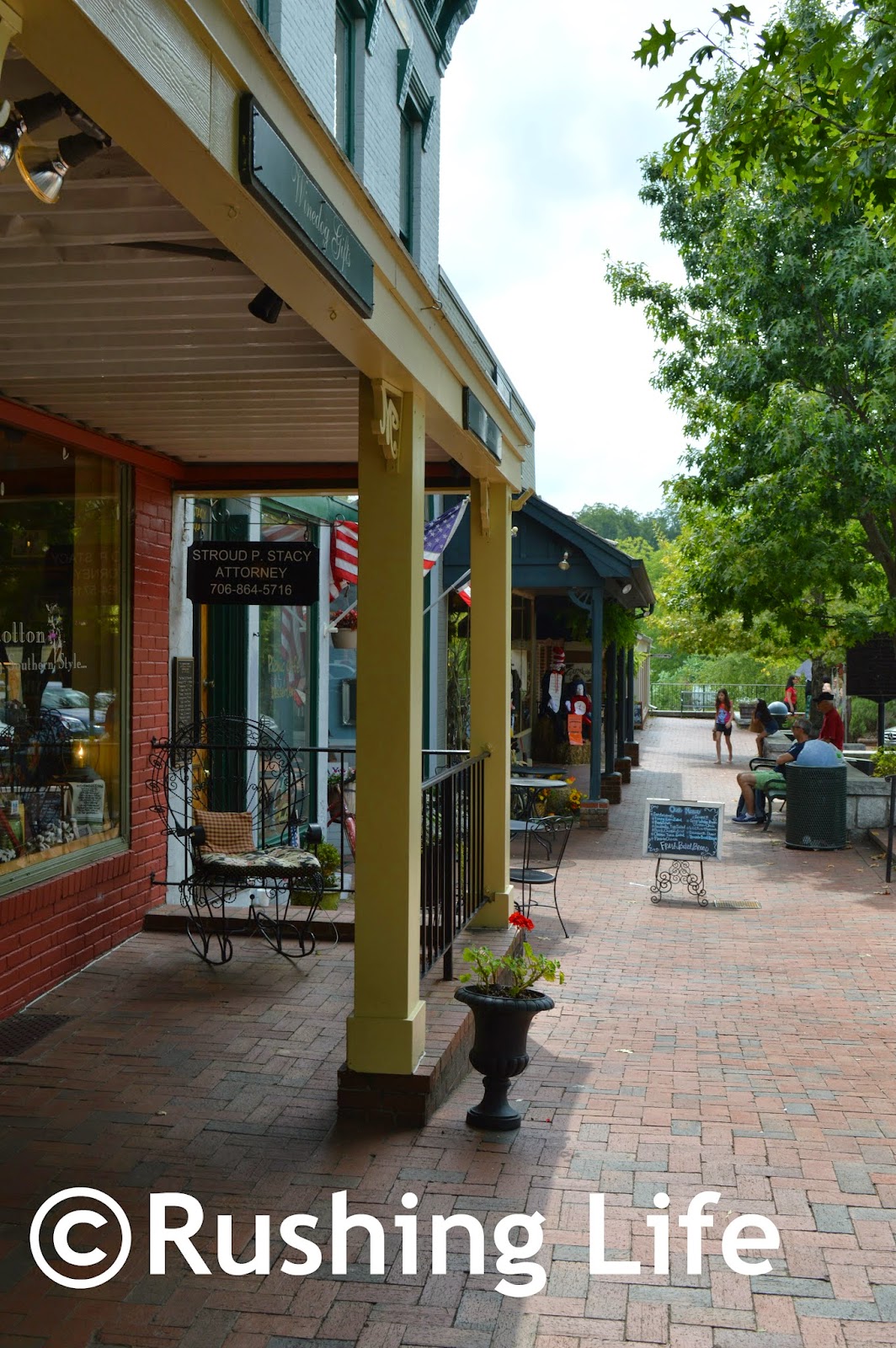 We had dinner at the Crimson Moon Café (eh - mediocre) and got some salted caramels from a local chocolate shop (also mediocre). However, our hotel was pretty rockstar. It was the Dahlonega Square Villas and we stayed in the historic villa downtown. It was just a block off the square and was so cute. It wasn't the nicest place ever, but it had a separate living room and small kitchen. There was a fireplace and tin ceilings. Bimmer kept calling it "my tiny hotel." 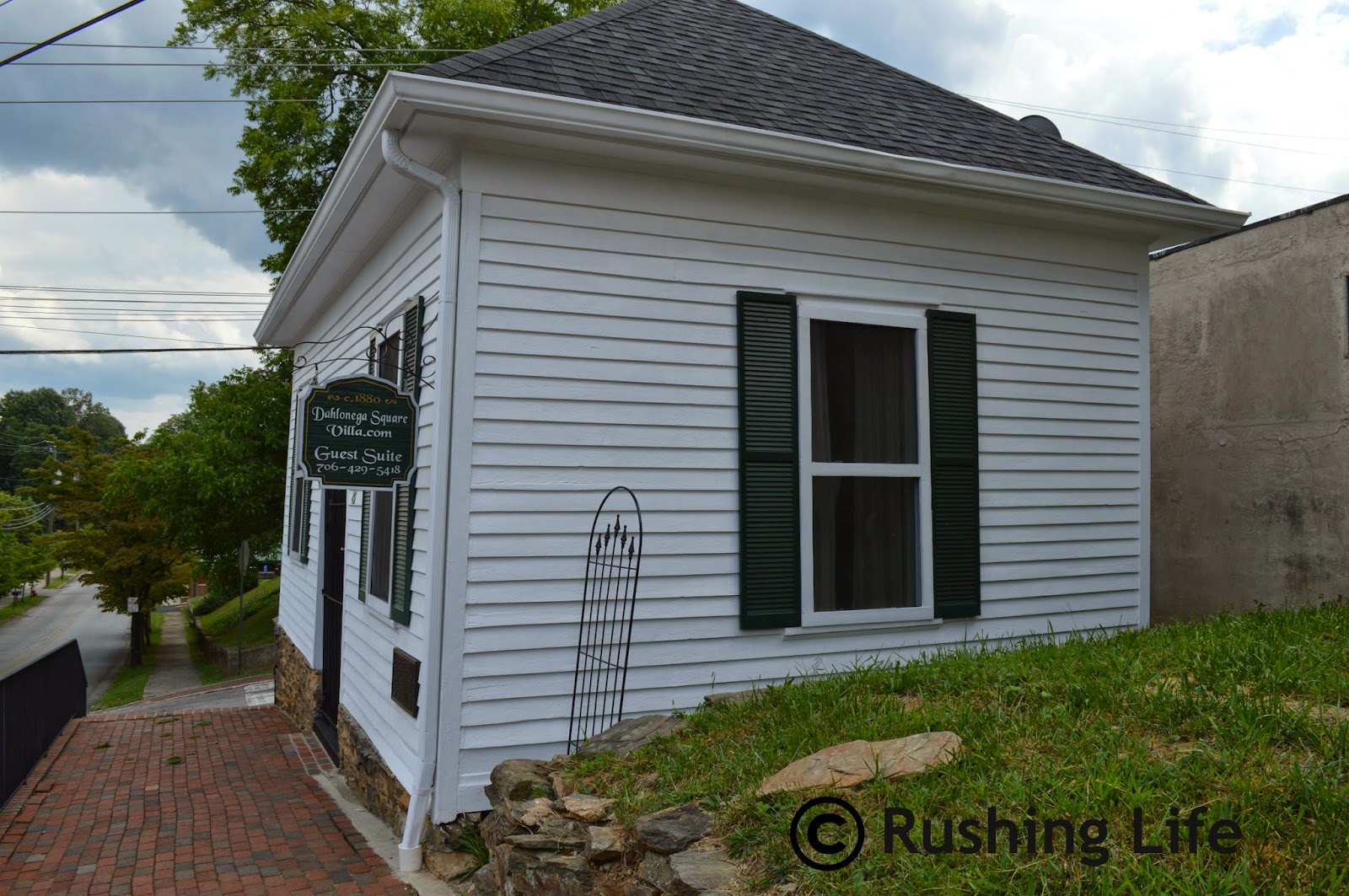 Since Bimmer still takes a bottle before bed, we had to make a run for some milk. We ended up at Walmart... for the first time in 5 years!!! I will completely admit to being a bit ridiculous in my need to take photos to commemorate the fact that we ended up in Walmart during a thunderstorm in rural Georgia. 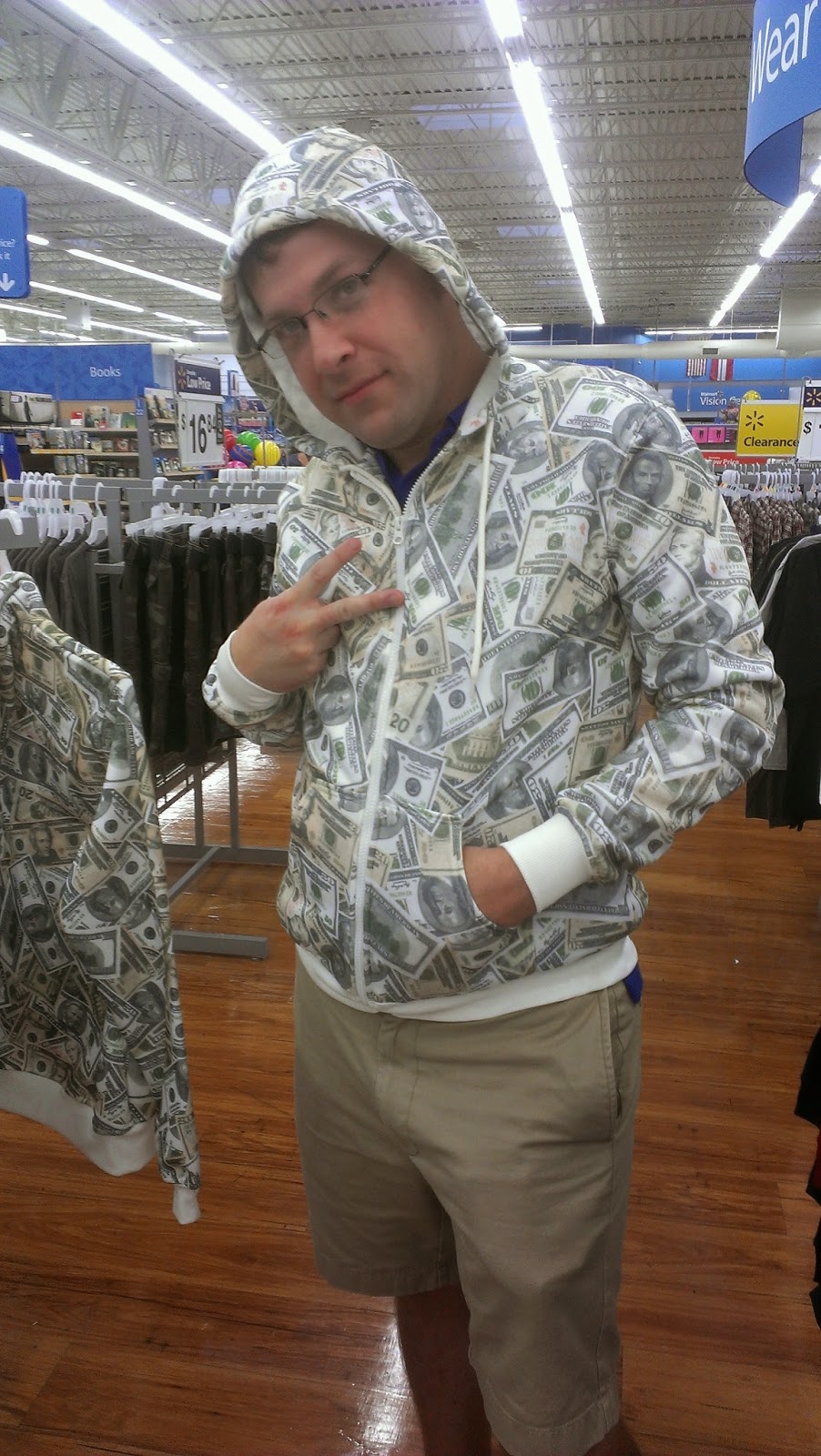 When we got back to the hotel, we had to run a block from the car to the villa, so we had to run in the rain. Bimmer wanted so badly to stay out in the rain, so I let her. Puff ran with her up the block twice while I took photos and then we all did it as a family a few times. She giggled and splashed the entire time. Just another way I'm trying to be more of a "Yes Mom." 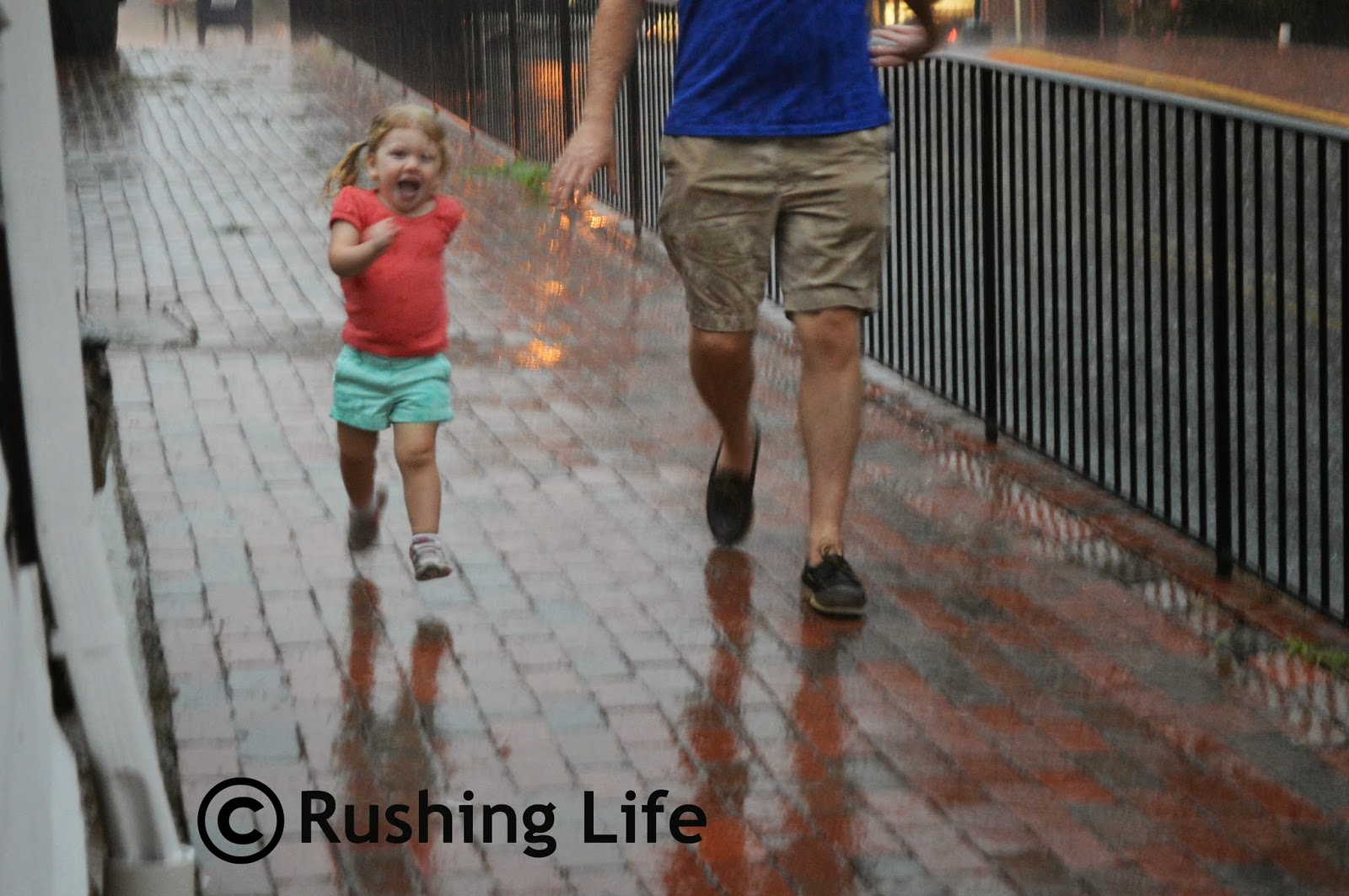 On our last morning, we took our time getting ready to head out. We stopped at a café in town for Puff to get some coffee and we mailed Bimmer's postcard to her. We had one destination and one destination only that day... Cleveland, Georgia, to visit the Babyland General Hospital. Aka the home of the Cabbage Patch Kid. 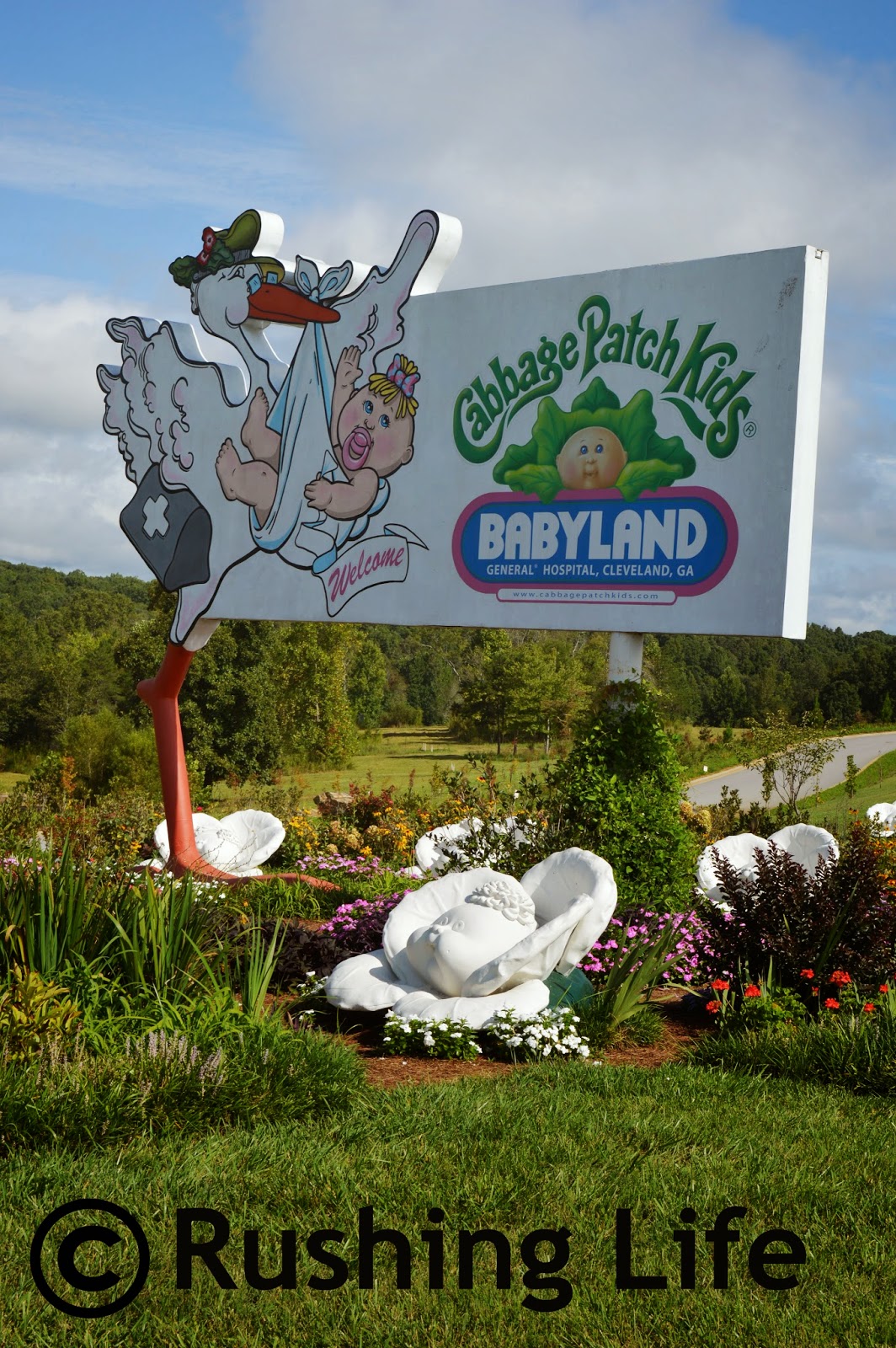 I'm pretty confident I was more excited than Bimmer. It has been my lifelong dream to have the job of naming Cabbage Patch Kids. (No... I'm being 100% serious.) I always had some stupid names for the ones I had as a kid... Tabitha, Marjorie, Milton Baldwin, Esther Dorcas. (Those are just the ones I remember!) Bimmer has two already (names are Harper and Olivia, but we don't use those names). She also has a small one that Puff named Magnus, since it didn't come with a name. (I guess the tiny ones don't come with them???) I love that she calls it Magnus too.
Anyway... the place wasn't exactly what I expected. There were just some display cases of older dolls (which I didn't have time to study since Bimmer ran off) but they had one big room that was part store, part museum. Bimmer was able to play with some of the dolls (fix their hair, give them bottles, play in a play kitchen). Then they had a "live birth" at the tree in the middle of the place. 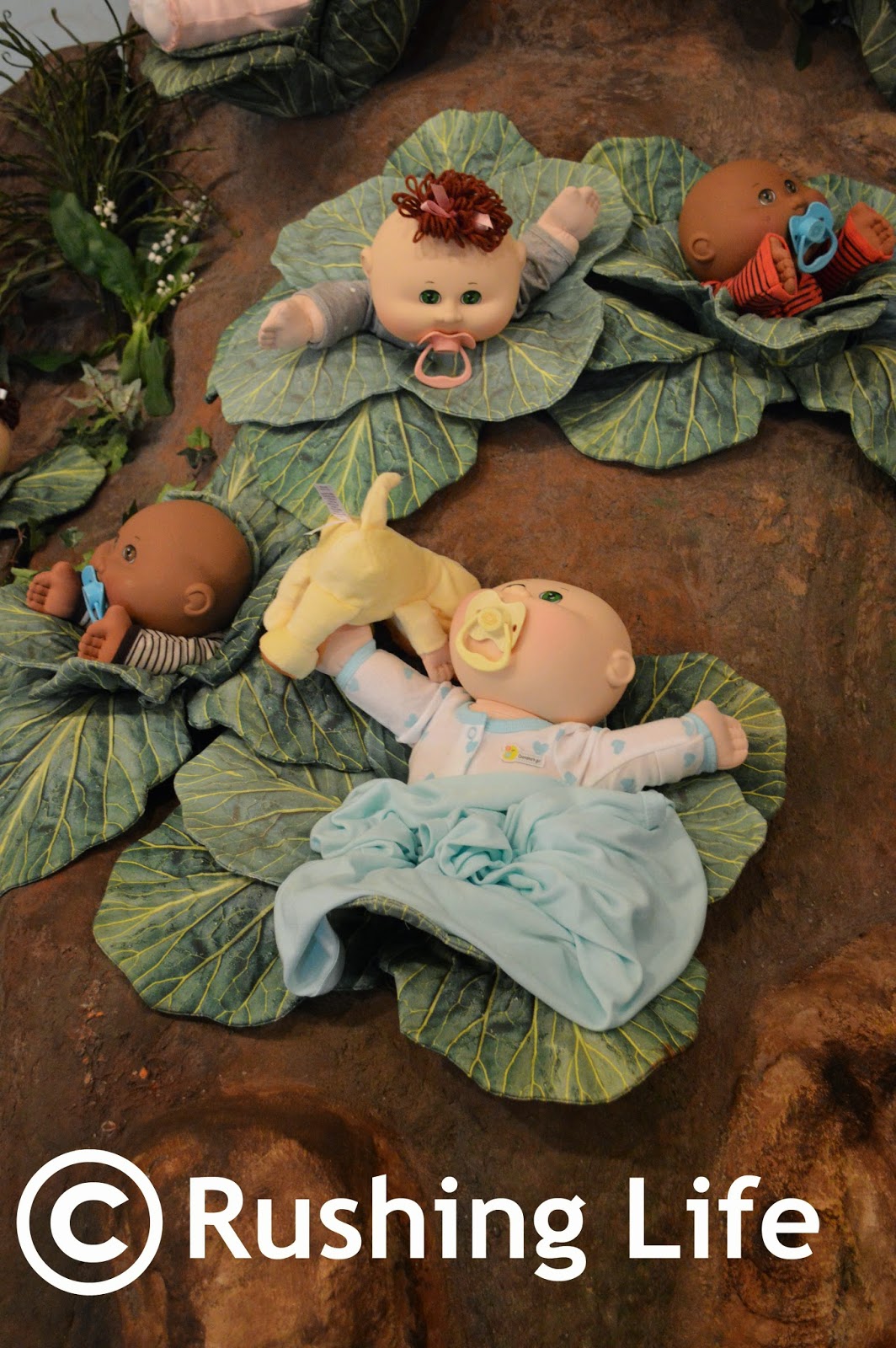 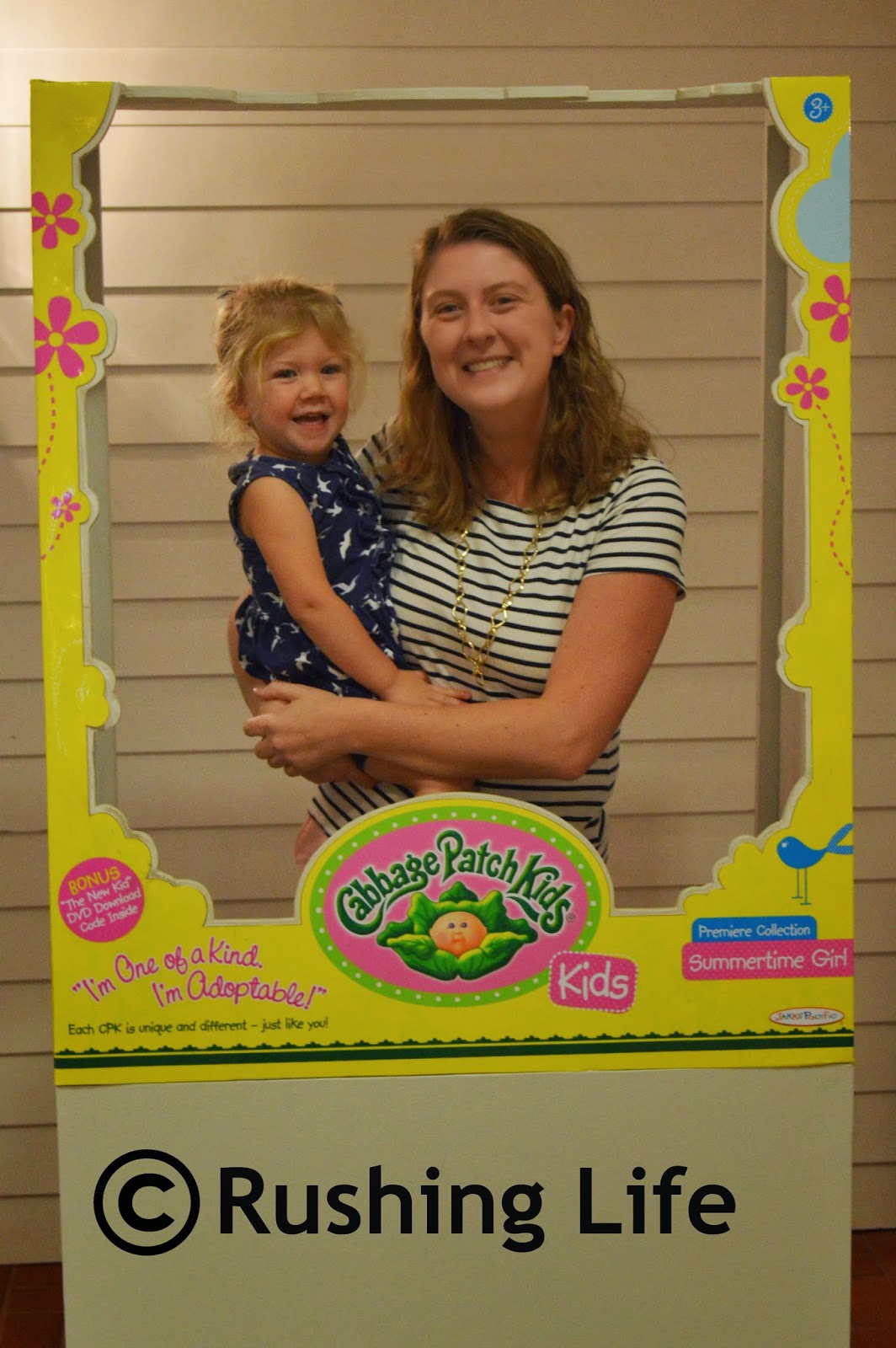 It was definitely interesting. They made lots of jokes that went over Bimmer's head and they let the crowd name the baby, so it was named Isabella Ella. (Dumb.) We spent just over an hour there and picking out a baby was the hardest part! I searched the entire store first to make sure getting an "Exclusive" baby was the right choice. I looked at the small babies and the ones in the boxes. They ranged in price from $20 to $40. I figured the $70 price tag on an exclusive one was worth it. (Yes, this baby was sorta kinda for me as well.) We hunted the entire place for a blond haired blue eyed baby, but couldn't find one. (They have them in the "kid" sized dolls, but not the baby.) We finally narrowed it down to a few and Bimmer picked her favorite. I also got her a change of clothes for it and a bottle. It came with a pacifier. I asked Bimmer what she wanted to name it and she said my name. (Awww.... so sweet!)
In the end, Puff let me pick the name (since he named Magnus) so I named it Peyton. (Which is my 3rd favorite girl's name... and since I know we won't ever have a third daughter, I thought it was safe!) Bimmer keeps calling her "Baby Peyton" and has been such a good mama to her! She loves her so much... and it makes me so happy. I loved my baby dolls when I was a kid too, so it is sweet to see her enjoying them. It makes me want to get mine out of storage so she can play with my old Cabbage Patch Kids too! 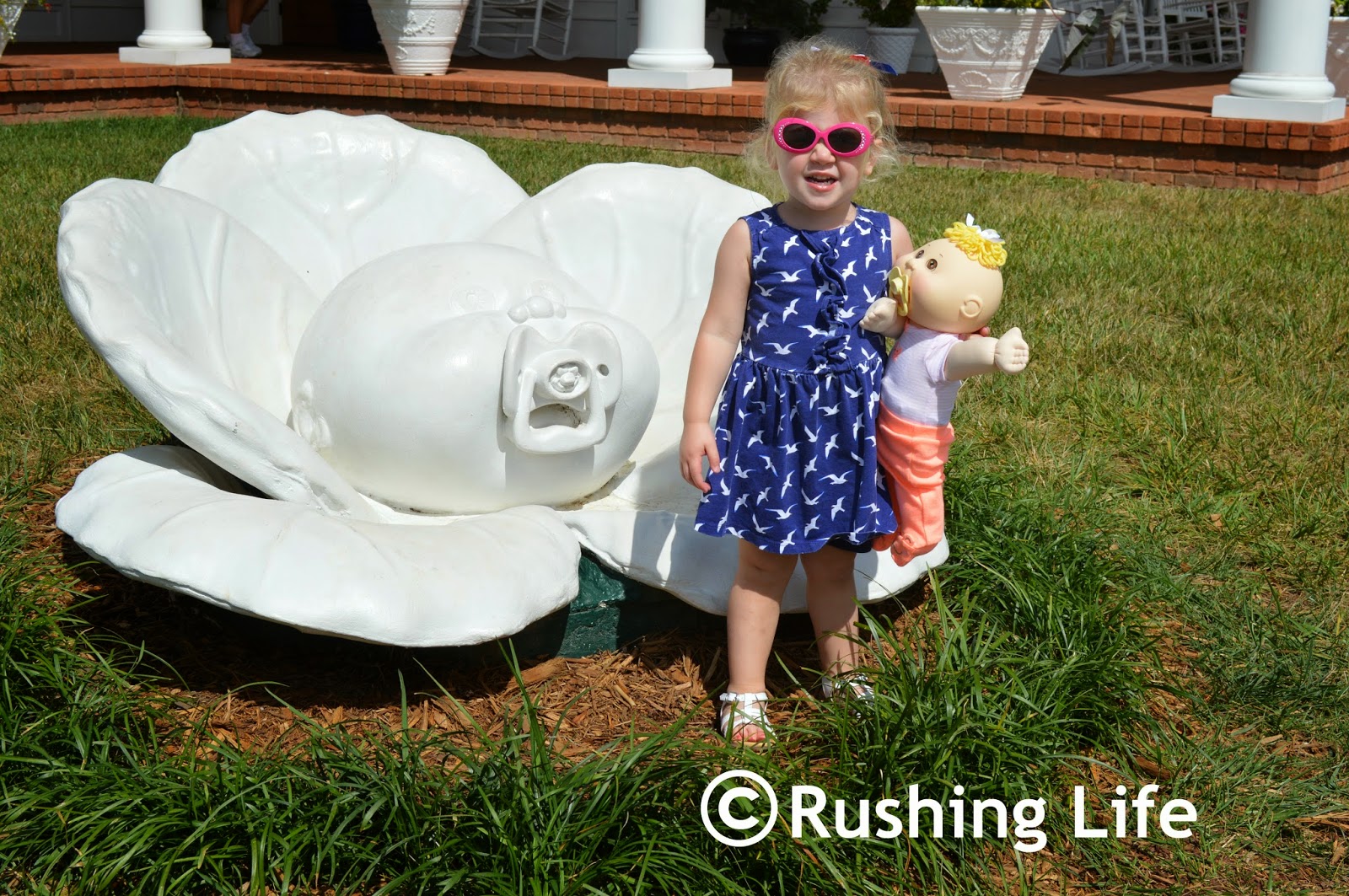 But my favorite part of it all is that Bimmer kept saying she got "my baby doll at the baby patch." Baby patch... how cute?
We have our last real 2014 vacation coming up in September, but I was so happy to have this little getaway with the family for Labor Day weekend. Making memories is so important to me. And we'll always have Peyton to remind us of our trip!
Posted by Gail at 3:24 PM
Email ThisBlogThis!Share to TwitterShare to FacebookShare to Pinterest

What a great trip!! Brianna never got that into Cabbage Kids but I always loved them! Just wait until Bimmer hits American Girl Doll phase....$200 I was ready to blow that Popsicle stand!! And gorgeous waterfall pictures! We love hiking and finding waterfalls and big rocks to climb on. Time spent outdoors as a family is always great!