We all know this isn't my favorite holiday. I'll say it again til the day I die... it's a paid day off to watch Cowboys football. However, now that Bimmer is here, I'm doing my best to wrap my head around liking this holiday and celebrating with family how grateful I am to have them. 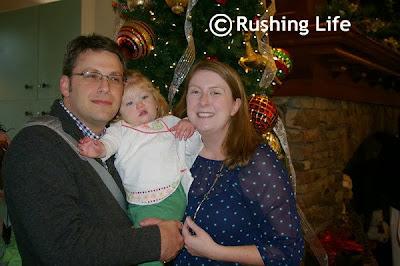 Yes, this is what happens when your camera is on its last leg and it hesitates so badly this is the best family photo you get!
We headed to Atlanta to spend the holiday with the MIL. Instead of cooking for just us (especially since I don't care for a lot of the traditional Thanksgiving foods) we hit up the buffet at the hotel at Stone Mountain. We had a nice seat overlooking the lake and drove around the park afterwards. Bimmer was pretty well behaved, even if "well behaved" is all relative. Yes, there were shoes and socks on our table. 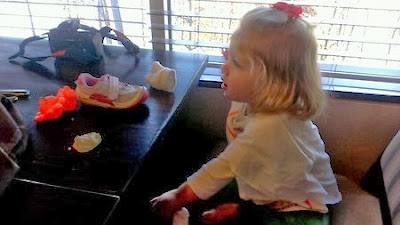 We spent a lot of good time with the MIL and trying to keep Bimmer from freaking out over her new kittens. She *hates* cats so that was interesting. Friday, we braved Black Friday with a toddler. Granted, we went out later in the day and went to a swanky Atlanta mall that didn't have many normal stores. We were there about 3 hours scouring for things for the MIL to buy our nieces/nephews. (Our attempts to get her to buy them cool trendy clothes often go ignored!) Bimmer did about as well as I did. In fact, I think I was ready to go before she was! 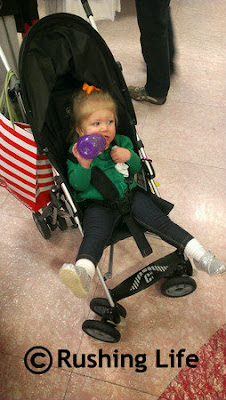 Friday night, we headed to see our good friends, since they had moved to a new house. They have six(!!!) kids and Bimmer just had a total blast. She got to jump on the bed holding Barbies with their daughters, we had homemade smores, and when I was holding their 6 month old baby, Bimmer melted my heart. She kept smiling at the baby and pointing and saying "baby." When he dropped his pacifier, she would pick it back up for him. She found an old bottle on the coffee table and tried to bring it to give to him. Yup - it had my ovaries hurting! 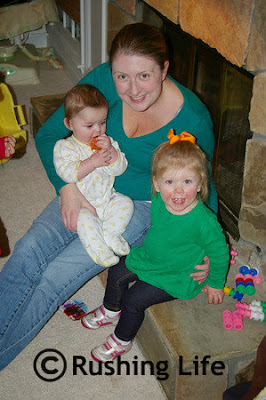 All told, the trip was nice. There were some moments, but I suppose that's always the case when it comes to in-laws, right? I was, however, super happy to get back Saturday afternoon so we could spend the rest of our long weekend preparing the house for Christmas!
Posted by Gail at 8:20 AM
Email ThisBlogThis!Share to TwitterShare to FacebookShare to Pinterest