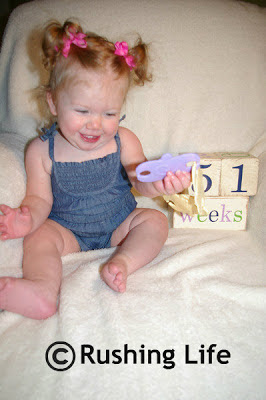 Please don't remind me that we only have one more week of these updates! My sweet baby girl is quickly jumping to toddler status!
She can stand on her own sometimes. Yeah, that happened on Mother's Day. I think having shoes on helped, but she doesn't like to crawl in them. We're working on it. Things like learning to walk take some time. But I don't think it will be much longer! Sometimes I'm not sure she realizes what she is doing. I was working on putting stuff away in her room one night and she climbed on top of a pack of diapers and before I knew it, she was standing up to pick them up. Grunting, of course. Such a ham. She is also doing a lot better with walking with her push-toy (the hardwood floors no longer make it go too fast for her) and she can cruise pretty darn fast when we are holding her fingers. She has also perfected the slow bend to go from standing to sitting.
Bimmer has been super sweet this past week with giving lots of kisses. Granted, she only gives them to me, but I'm not complaining. One night, she motioned her fingers for me to come in close to her, and then she leaned in and planted a big ol' smooch on my cheek. It totally had me tearing up! And when Puff or I are sitting on the ground, she likes to come over now and plop in our laps. It's much more purposeful it seems than before when she just wanted to be held. It's like our little toddler knows her butt fits perfectly right there with Mommy or Daddy.
We are still working on formula in the sippy cup and taking the time to work on new foods. She did try some rice this week and it was a success! We had tried a few weeks back to no luck. It's definitely a trial and error and keep trying situation with this kid. She ate a few potatoes this week too, but then rejected the third one. I'm going to chalk that one up to her being so tired during dinner that she literally dozed off. Probably not the best time to try to introduce something new!
She's been doing awesome with a sleep schedule and has been sleeping through the night most nights lately. It all just worries me though because in a few short weeks, we'll have a lot of transitions... new class at school, sleeping in the crib, milk instead of formula, drinking from a sippy cup not a bottle at school. I have to figure out which ones are the most important and work on those first. We don't have a choice about the new class and don't really have a choice about using the sippy cup at school. My plan is to start on the milk the week of June 3rd and hopefully start with the sleeping in the crib the next week. Thankfully she has been doing awesome with weekend and evening naps in the crib. So she is getting used to it somewhat. My goal is just to have all of that behind us by the start of July. It's going to be an insane month in The Bungalow!
NEWS FLASH: Since I pre-wrote the above last week, Bimmer has taken major strides! We were traveling over the weekend (more on that soon) and she totally took her first steps in the hallways of the hotel!!! I wouldn't have believed it had I not seen it. She definitely took 2 or 3 steps on her own! We are so close she can taste it!

Posted by Gail at 7:13 AM
Email ThisBlogThis!Share to TwitterShare to FacebookShare to Pinterest