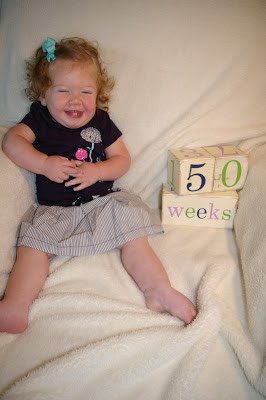 I feel like we have made major strides this week in a lot of ways!
Bimmer is now drinking happily from a sippy cup. At school anyway. And usually only water or juice. But we're getting there. The fact that she drinks it at all is a major milestone. I about had a fit when I talked to the director at daycare this week and found out they're promoting her in June to the Toddler Room, regardless of whether she is walking or not. Then I found out they're promoting 6 or the 8 kids in her class, and only one is walking. So I am a little bit more at ease since she won't be the only one behind. She will still be the youngest in the class though. I've got to now think about finding her a nap mat, since there aren't cribs in that class! Good luck with that one, teachers!
We got Bimmer her first pair of real shoes this week ($40!!!!! at Stride Rite) but it's time for her to start wearing them and getting used to them. They frustrate her sometimes, since she can't quite get turned around with them on, but she will figure it out. She has been wanting to walk more and more with us holding her hands, so I know independent steps can't be too far away. She has stood on her own a few times without holding on to anything. She did it for the longest time while on Skype with my dad for his birthday. Just showing off for Papaw!
She has been eating ham this week, and pears too. We tried fish, but she wasn't in the mood to eat and just smeared it all over her face. Her favorite thing right now is strawberry-banana yogurt. She even got to taste a donut as an early Mother's Day treat. It was a cute precursor to the first birthday cake smash photos that are in our near future. Crumbs galore!
And just a sweet story to end with this week... She has been an awesome sleeper this week. (Although sleeping from 9pm-5am and then back to sleep til 7am may frustrate some, I can't get mad at that long of a stretch!) Anyway... one night she was wiggly and restless and I just laid there. She crawled up and put her head on the pillow next to mine and fell back to sleep for a few minutes. Then she readjusted herself and put her head on TOP of my head, cheek to cheek, and fell back to sleep. It was the absolute sweetest thing. She just needed some Mommy snuggles. And I am more than happy to give them to her, since Operation Get In Yo Crib is about to commence in a few weeks!

Posted by Gail at 7:44 PM
Email ThisBlogThis!Share to TwitterShare to FacebookShare to Pinterest