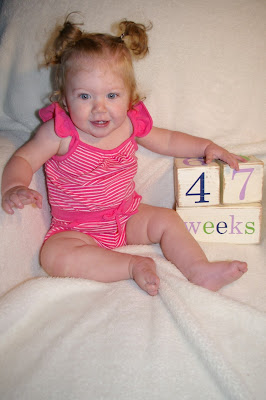 Oh, my sweet little daughter is such a brat.
Yup... we are officially experiencing temper tantrums. If you take something from her, move her away from something, tell her no. Basically, if she doesn't get her way 100% of the time, you're going to know about it. And I don't really know what to do about it. She's only just shy of 11 months old. She is just finally grasping what "no" even means. I try not to let her get away with murder, but sometimes, you do have to give in. Dropping her off at daycare has been horrific in the mornings lately. Crocodile tears the second we walk into her classroom. Screaming and crawling after me, red faced.
When she is getting her way, she is such a ball of joy. She has started a thing now where she will lean her forehead into my face, wanting me to kiss it. Mommy loves forehead kisses, so I guess she does too! She also apparently has no fear of dark rooms. She has a new game where she will look at you, make sure you're paying attention, and then take off crawling as fast as she can in the other direction. I stomp behind her and she giggles. She'll stop to look back and then if you get close, she takes off again. I love the sound of her laughter as it flows through The Bungalow!
There don't seem to be any signs of her wanting to start walking independently. I really thought she would be an early walker. And even though she walks pretty well around holding on to furniture or the wall, she never actually tries to take steps without holding on. I'm sure one day I will be wishing for the days when I could contain her since she wasn't running around! We're also still struggling with the sippy cup and have been slow to introduce more finger foods, but that's my fault. I just don't have the time. Yes, that makes me sound like a horrible mother, but it's the truth. Preparing a real meal is way more labor intensive and time consuming than giving her baby food. Especially when she wants it NOW and is throwing her head back in protest of you taking too long.
She is thoroughly enjoying her swing we bought her for an early 1st birthday gift. We hung it from the big oak in our backyard and she gets almost daily pushes. She just lights up the entire time. I've been letting Puff handle swing duty lately though, since we have all these little wormy things hanging from the trees. It's one of my least favorite things about spring! I'd rather deal with pollen than little green creepy crawlies!

Posted by Gail at 9:17 AM
Email ThisBlogThis!Share to TwitterShare to FacebookShare to Pinterest