It's hard to tell in this photo, but this was the week that Bimmer's epic battle with ear infections began... 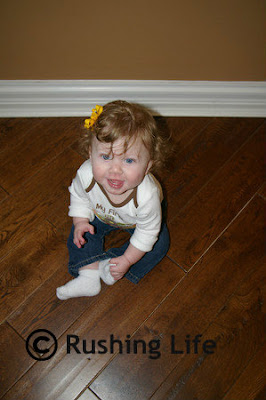 From Thanksgiving until mid-March, I am pretty convinced the baby never actually was without an infection. She went through 6 (SIX!!!) different antibiotics in that time frame... including 2 shots! I was beyond frustrated. This mama knows how bad ear infections hurt and Bimmer had been a trooper long enough. It ws time for some intervention. 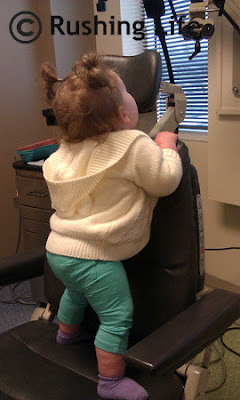 We were with the ear doc for all of 3 minutes. His exact words were, "She has A LOT of fluid in there!" Yup... Bimmer was a prime candidate for ear tubes. I had them as a child, which I remember because my anesthesiologist was hot. Yup... even at 4 I knew that! ::insert grin:: 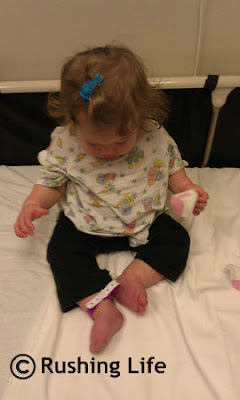 So one recent morning, we woke the baby super early, headed toward the hospital, and got stuck in dead-stopped traffic on the highway because of a tractor trailer blocking all three lanes! We were able to get off the next exit and get around it, but we were still about 15 minutes late. ::shrug:: The check-in process was quick and painless and we probably waited a total of 10 minutes in two separate areas before getting back into a room. The assessment was fast and thorough. We kept Bimmer occupied with her toy remote control and Puff singing "S&M" by Rihanna to her. I'm sure anyone who could hear us found it amusing.

When it was time to take her back, the nurse asked Bimmer if she could hold her and she gladly went. I was shocked! We followed them down the hall and she was just hanging on to the nurse and looking back at me and smiling. Yup... she smiled as she left us and went into surgery! That made it SOOOOO much easier for me and Puff!!!

We literally had enough time to check our email on our phones and use the restroom before the doctor came over to us. I like that he doesn't beat around the bush. He told us that she did awesome, but that her ears looked "horrible." Apparently both were infected (which I suspected) and she had a lot of fluid in both as well. I was just so happy that she had done OK! 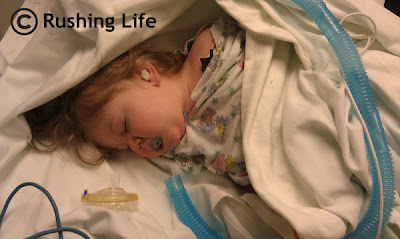 Seeing Bimmer in this state was hard to swallow. But I knew she was OK and I was there for her when she woke up. Her heart rate kept hovering around 120 and her oxygen was at 98. The breathing tube was scary and I knew it would freak her out when she woke up. It would freak me out too!!! We stood there about 5 minutes until she started to stir. The nurse was awesome and jumped in to grab the tube out and unhook her from all the monitors. Bimmer cried while we were unhooking the machines, but as soon as I was able to hold her, she was totally fine. She took a bottle of apple juice and was dancing on the bed when I was trying to get her dressed. They gave her a little rubber ducky with bunny ears on it as a "prize" for doing so well. 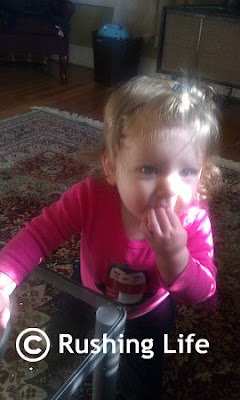 On the way home, we stopped at Chick-fil-A (yes, I know... ugh) and got her a buttered biscuit. We know my little southern girl loves her a biscuit!!! I was so happy that she was chipper and acting herself when we got home. She did her biscuit dance, took a bottle, and snuggled with Puff when I headed off to work. She got to spend a few hours that afternoon with the Nanny, who came to stay with her. She slept most of the day, but was happy and playful when she was awake.

It was definitely scary to know my baby was going under for a surgery, but the doctors and nurses were great. We can't believe how quickly it went (we were at the surgery center less than 2 hours) and how well she has done recovering. Here's hoping she stays healthy now, starts to hear better, and maybe, just maybe, starts to talk a little bit more!
Posted by Gail at 7:35 AM
Email ThisBlogThis!Share to TwitterShare to FacebookShare to Pinterest

Poor baby! Ear problems are the worst-Says the girl who had 8 sets of tubes and ear surgery at 10 (remember that!?) I'm sure she will feel much better now, but it seems like she did awesome even when she was sick! They just kind of melt your heart when they are so good about a situation that should have them miserable! Good job mama! You passed one of the biggest mommy trials EVER! :-)