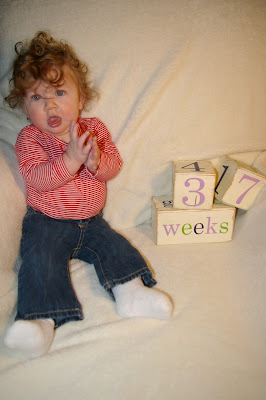 Showing off her clapping skills and some bedhead this morning!
After mentioning that I felt like I wasn't giving her enough "people" food, I have been sneaking her more bread, some pasta (although she has trouble chewing that), and even some bites of a burger (which she loved). Now we just need to get Mommy & Daddy eating healthier so when she does eat "people" food it's something good for her!

Her biggest thing this week was that she has perfected clapping. I didn't have any clue when babies did that, but after mastering the high-five two weeks ago, she realized she can clap with her own two hands. Sometimes I think she does it to take her to a "happy place" when she's getting a diaper changed or waiting for me to make a bottle. Yes, she does it when she's happy too and loves when we clap along with her.

She is also doing really well with standing and then bending down to pick up a toy that's on the floor, while holding on to the table/chair/couch without sitting down to pick up the toy. When she finally gets it, she always looks to us with a big grin and we clap in approval. Sometimes she still gets stuck though standing and doesn't know how to get herself back down to the ground.
Her word this week has been "Dada" and she says it over and over and over and over. It was near constant on Sunday! I think she's only said "Mama" once this whole week. I can't let myself get upset about it. She knows who her Mommy is and she still loves me. I also realized that she is just about to outgrown her 6 month sized onesies. She has been in sized 9 month pants and sleepers since just after Christmas, but is just now finally outgrowing her shirts. I feel like the rate at which she is growing has slowed significantly. I will be anxious to see how tall she is at her 9 month check-up in a few weeks.
Lastly, the little girl is sooooo sweet and cute when she's sleeping. She still is only a stomach sleeper, which has always been her preference from day one. But she spreads out and sleeps with her arms stretched out sometimes. She's not as adamant most nights anymore about having to be all curled up next to me or Puff when she sleeps, although if she stirs in the middle of the night, putting a hand on her back calms her pretty much immediately. She does like to sleep now with her legs tucked up under her and her butt in the air. I have no idea how that's comfortable, but hey... if she's sleeping, we don't really care what position she's in! (Says the insomniac mom who is writing this at 4am!)
Make that second to last... On Thursday afternoon, I got the call from school that she had thrown up twice and I had to come get her. Poor girl! She was fine when I picked her up, but when we got home, she was very whiny. She took a little bit of a bottle and then we had a bath. After that, she finished a whole bottle and took a 2 hour nap. When she woke up, she just kept switching positions laying next to me on the bed moaning. But she ultimately ate dinner, played for awhile, and took a 7 oz. bottle to go to sleep. She only woke up once in the middle of the night. Poor girl, can't catch a break!

Posted by Gail at 8:26 AM
Email ThisBlogThis!Share to TwitterShare to FacebookShare to Pinterest

So cute!! I love the butt up in the air sleeping position. It's so funny!!