I had heard through the grapevine a few years back that the Pumpkintown Pumpkin Festival was well worth the trip to the rural mountains. Yes, there's actually a town called Pumpkintown. Puff and I had driven through "town" several times before, and I was at a loss at where it would be since I only remembered a church, maybe a gas station, and a general store that would scare me to enter. 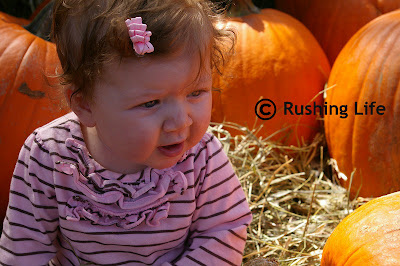 We headed out late morning, since we didn't have much interest in their parade. But a few miles from where we thought it would be, the two-lane road came to a complete and dead stop. Yup... a traffic jam in the middle of no where! It took us about a half hour (and one crying baby, whom Puff ended up feeding in her car seat) to get to the parking lot. Let's just say, I was less than impressed with the organizers of the festival.

Not only was the traffic a ridiculous, unorganized mess, but we also had an impossible time finding any information on the festival. We never could find a good schedule or list of vendors. Oh yeah, and a serious lack of pumpkins. I imagined a huge display and sale, but nope... there were probably 30 pumpkins in front of the community center building and that was it. (Although, Bimmer looks pretty darn cute there, doesn't she???)

The vendor selection was good, except the only thing we ended up buying were a few hair bows for Bimmer, since we didn't want to lug around anything big through a festival that was literally set amongst the trees on a hill behind a random building. Not to mention the half mile we probably walked to the parking. But Bimmer did awesome in her Bjorn and was checking everything out. And we ran into an old friend from college as well, with her adorable little boy. So random!
Since you all come here for recommendations, I would recommend it, at least once. I *think* it's always the second Saturday in October. Just be prepared for a bit of a chaotic mess in the parking situation, but after you get past that, you'll have a good time. The music was good and the vendors were varied. I don't think we'll be rushing back though... not when there are much better festivals in the fall! Stay tuned for the European Auto Show and the State Fair!!!
Posted by Gail at 5:35 PM
Email ThisBlogThis!Share to TwitterShare to FacebookShare to Pinterest