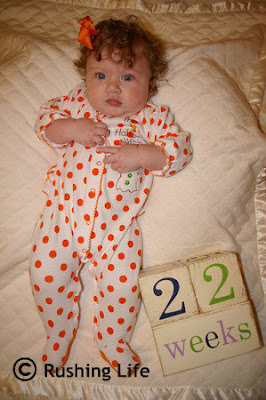 Puff and I have both noticed something about Bimmer recently... how expressive she has become.

She gives serious looks and funny ones. She laughs and giggles. She pouts and frowns. She looks inquisitively at everything. She gets frustrated.

One morning, when it was still dark outside, I sat her in her Bumbo on the kitchen table (since that's where it was) and I turned into the kitchen, just out of view. And she shrieked. And she cried like I had never heard her before, nor since. She was scared.

She has also started to reach more for things, which includes laying down and stretching and rolling over if necessary to grab something. She has actually reached for Mommy a few times too. And the nanny says sometimes Bimmer will reach to be let out of her exersaucer.

When Puff holds her, she'll stroke his shoulder sometimes and hold on tighter to him. She has started to sometimes reach up and put her hands on my cheeks, which is too adorable for words. And on a few occasions, when I've been trying to calm her down during teething by laying next to her and singing softly, she'll hear me start to sing "Itsy Bitsy Spider" and if I'm not doing the hand motions (which include me crawling my fingers up her to represent the spider's ascent) then she has reached over and run her fingers up my cheek. Now, I'm not saying she knows what she's doing, but I'm not dismissing the possibility either.

We all know she's a bit of an overachiever!
Posted by Gail at 8:00 PM
Email ThisBlogThis!Share to TwitterShare to FacebookShare to Pinterest