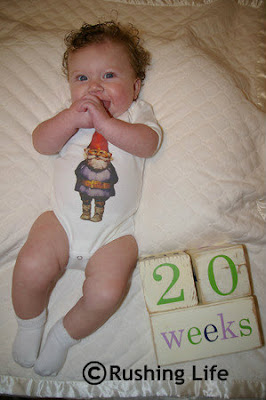 Twenty weeks ago, my world got flip turned upside down. In the best way possible.
I always knew I wanted to be a mother. And I kinda figured I would be decent at it. But I just had no way of preparing for the overwhelming rush of emotions and love that just hit like a semi-truck the second Bimmer was born.
My little bitty baby continues to grow up way too fast on me. This week, we gave her cereal for the first time. Which also meant she got to sit in a highchair for the first time. She wasn't too keen on that, since she is restrained and can't wiggle. But she laughed and giggled through the entire two attempts at baby cereal. By the second time, she had caught on to the whole ordeal and was reaching for the bowl and was putting her hands on the spoon when I put it in her mouth. I have a feeling she's going to want to try some "Baby Led Weaning" in a month or so. I can just see her having a ball with a banana!
Then she decided, officially, that she was going to become super proficient at sitting up by herself. Sure, there are times she still falls over, especially if she gets really excited or reaching for things. But we were able to go pick pumpkins and she sat, unassisted, for all of her photos. She was the only baby at the pumpkin patch that wasn't crying. She was enthralled by everything and kept watching the cars that were going past. She's definitely Puff's daughter... having an ADD moment to look at cars!
Her Mamaw and Papaw were supposed to visit this week, but had to cancel due to my grandma being in the hospital back in The Fort. We are definitely sad that they weren't able to come see our growing girl (they haven't seen her since she was 8 weeks old!) but they are in the right place. They can visit soon. Plus, we are excited that we were able to make plans to travel back up north for Thanksgiving. It will be the first time I have spent that holiday with my family since 2003. Now we just gotta take this little tot shopping to find her a cute outfit for Turkey Day! It'll be here before we know it.

Posted by Gail at 8:15 PM
Email ThisBlogThis!Share to TwitterShare to FacebookShare to Pinterest