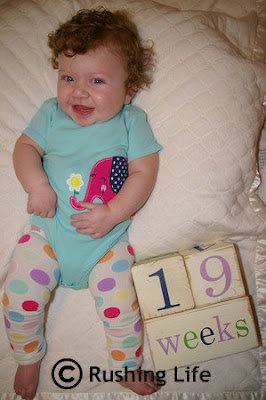 I don't understand why her hair photographs red. Hmm...
I swear my little baby has grown up over night this week!

All of a sudden, she is so interested in her exersaucer! We had tried her in it occasionally the past few weeks, but just this week has she gotten excited and really stood up and reached for everything and spun things around, etc. She's also gotten to the point where she knows to push her bottle away when she's not hungry anymore or doesn't want it. Instead of just spitting it out, she now uses her hands to push it away. She's way too young to learn to be doing that, right?

One of the biggest changes I've noticed is how anxious she is to sit up on her own. Whenever I sit cross-legged with her on my lap, she sits up really really well unassisted. And then if we're holding her (like a baby) to give her a bottle and she's done, she uses her own strength and muscles to pull herself up to a seated position. And she can sit for a few seconds on her own, if she's on a hard surface like the ground. She does still lean forward and use her hands to prop herself up, but it's just so crazy. She's not even 4 1/2 months old yet! One time she even was sitting up on the couch for a few seconds and then fell over. And she was able to figure out how to get from that awkward position and roll herself on to her stomach. Sitting her with the Boppy behind her has also become a favorite activity. That way if she gets really excited and leans backward, she can catch herself and sit back up straight. My big girl!!!

She also has become even more inquisitive. She was sitting in her Bumbo on the counter and there were two new boxes of bottles to be opened. She kept reaching for them and then would lick it and knock it over. And then try to figure out how to pick it back up and move it. And when she couldn't figure out how to get the first box up, she would just turn around and scoot the other box closer. The scary thing though was the time she noticed the electrical socket that was behind her and reached for that. Looks like it's time to start thinking about some baby proofing at The Bungalow!!!
This was also the week I went to work with baby poop under my fingernail and didn't realize it until after 10am, which followed a meeting where I shook several people's hands. Sorry 'bout that! Whoopsies!

Posted by Gail at 12:42 PM
Email ThisBlogThis!Share to TwitterShare to FacebookShare to Pinterest