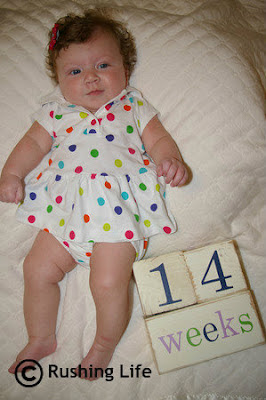 It's official, Bimmer has someplace to go. I mentioned last week that on a few fluke instances, she had gotten so mad she managed to move herself on the bed. I have now seen it in full effect, both mad and happy. But usually mad. She is pretty quick about it too. Within a matter of about two minutes, she can get from one end of the crib to the other. I came out of the shower one day to find her all the way in the far corner of the crib, where she had managed to move two of her stuffed animals out of the way as well. Being pissed off is apparently really good motivation for a 3 month old!

On the flip side, one day I put her on the bed, so I could go to the bathroom. She wasn't angry, so I figured it was safe. Turns out, she'll move when she's happy too. She moved herself back about two or three good scoots so she was face to face with her stuffed pig. And she was just happily laying there... licking his nose. Bonus pic time... 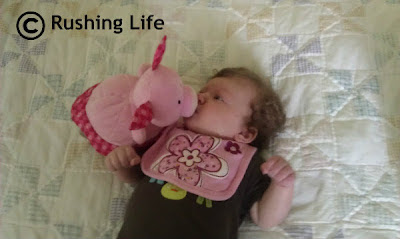 When I texted the photo to Puff, he was like, "She's a lover, not a fighter." I'm not totally sure about that. She loves her piggie, but she will fight Mommy tooth and nail if she gets put down when she doesn't want to be! She also has decided that she likes to try to put her ball in her mouth, but she can't quite get it there, so she just ends up sticking her tongue through the holes on it. It's pretty cute. (Not that I'm biased or anything.)
Another new favorite activity is to talk to the baby in the mirror. She had always been sorta indifferent, but this past week, she has decided it's fun to wiggle and giggle and talk to the baby in the mirror. She even reaches for her reflection. I love to watch her wheels turning!
Posted by Gail at 12:09 PM
Email ThisBlogThis!Share to TwitterShare to FacebookShare to Pinterest

I love the pig picture! Adorable!!