I had heard about the Lilly-Target collaboration a month or two ago from a blog I read. I knew it was going to be limited, crazy, and probably a little hard to get. However, Puff left town this morning, so waiting in line (in the pouring rain, no less!!!) outside Target was not going to be an option. Plus, I've never done Black Friday shopping (or Tickle Me Elmo shopping) so I honestly had no idea what to expect.

I did try to get online at 4:17am - no dice. The Target site had crashed. I tried again around 7am. Still no luck. Bimmer had gone to bed late, so I let her wake on her own - around 7:30am. We got dressed and hurried to the most recently accessible Target for us... and the parking lot was FULL. We regularly shop at Target on Sunday mornings and there are usually only about 5 or 6 cars there. Not this morning. The minute I saw that, my heart sank. I knew there wasn't much hope to get much of anything.

Inside was a zoo. All of the women's racks were already empty... 5 minutes after the store had opened. People were standing with carts full of stuff - that I'm certain they won't all buy or will return in a few days. But just hoarding whatever they could get. The girl's section had one bathing suit left - in a size way too big for Bimmer. (And in a pattern I didn't like anyway.) And the toddler girl's section was completely bare.

Bimmer was sad since I had told her we were going to try to find her a dress. But we walked around the store with our list and got up everything else we needed. On a whim, I walked back past the toddler section and randomly the shorts I had wanted for the girls... there was a 12 month sized pair! So at least Healey could get some! 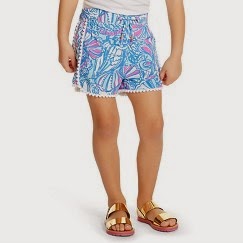 We double backed a few times. There were at least 30 ladies hanging out at the bare racks in the women's section - I guess hoping for people to come back to hang something back up, or trade, etc. There were probably another 30 different women stalking the dressing rooms as people came out. I saw a large woman RUN up to a Target associate who had a beach towel in his hand begging him to let her have it. I stumbled across 6 women hunkered down in the corner on the toilet paper aisle swapping things and deciding if anyone wanted anything from anyone else. They had literally grabbed anything and everything they could grab.

When we got home, I tried online again and was able to snag Bimmer this shirt. (I only knew I liked it because the lady in front of me checking out was buying the exact size I needed!) 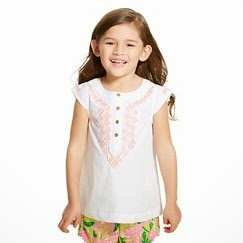 And yes, I had to get the next size up, so both her and Healey won't get to wear their spoils until next summer. But that's fine - I'm already contemplating having them both wear them for their 4 year old and 1 year old birthday photos. (Yup - ridiculousness happens here, folks.)

What did I want to get? Had I been luckier? Honestly, not all that much. 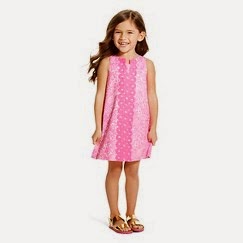 I had hoped to score this dress for either one or the other of my baby girls. 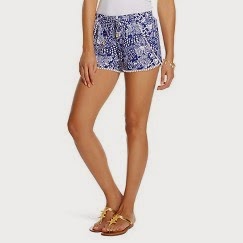 And these shorts were the only things I had wanted to get for myself.

I was saddened that the stock was so limited at each store and that the website wasn't prepared to handle the volume. It sucked, but it's not the end of the world. I had friends who went later in the morning and weren't able to get anything at all. So at least I got something.

I think I'll stick with the normal Lilly. I'm not obsessed with it, so it doesn't really worry me to not have too much of it. But it's nice to know that if I do fall in love with something, I always have the means to just grab it. Even if it's not at Target.


Posted by Gail at 11:16 AM
Email ThisBlogThis!Share to TwitterShare to FacebookShare to Pinterest