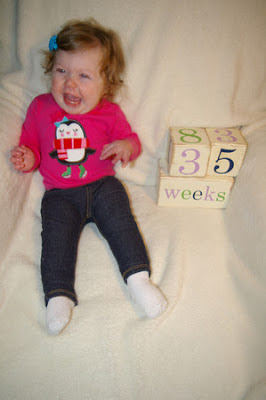 If there were ever a week to label Bimmer a "Mommy's Girl," this was it.

She's always sorta leaned that way, but it seemed to be much more prevalent this week. Probably because the poor girl was sick off and on all week and just wanted her Mommy.

She fell asleep sitting in my lap on the floor one day. There were lots of sitting still in my lap on the couch, which never happens. There was lots of crawling after me whenever I put her down and grabbing at my pants. If I was on the couch and she was on the ground, she would stand herself up to reach me. (Yes, she has officially mastered that.) And in one very scary incident where I caught her right before she fell off her changing pad from the top of the dresser, she said a very audible "Ma Ma."

She got sent home from school on Thursday afternoon with a fever, but it was gone by the time we got home. However, that meant she had to stay home on Friday... for the second week in a row. I'm starting to think she's doing it on purpose to get long weekends! Earlier in the week, she did start to cry each morning as we walked up to school to get dropped off, instead of waiting until I put her down in her classroom. Yup... this kid is too smart for her own good sometimes!

And we have officially graduated to being able to eat some crackers too. Still working on not swallowing goldfish whole, but my little girl is a gooooood eater!

Posted by Gail at 4:35 PM
Email ThisBlogThis!Share to TwitterShare to FacebookShare to Pinterest