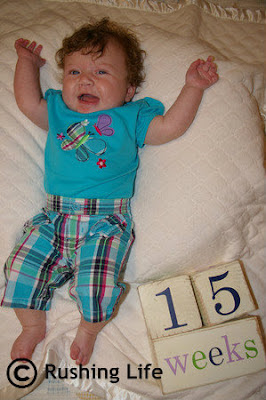 Now, I'm not going to say that Bimmer is a "high needs" or "difficult" baby. I'm just saying... well, she knows what she wants. And she is very particular about it.

I've got another post coming up soon about comparing one baby to another, so I'll avoid that for now. But let's point out a few of those things that Bimmer gets her way on...

She prefers to be naked than clothed. I am guaranteed to calm her down if I take off everything but her diaper.

She wants to be entertained. Preferably while being held. She is definitely not chill to just sit there and watch you. If only. Just for a few minutes. That's all I ask Bimmer!

As a newborn, she was having nothing to do with wearing hats or socks. She also never liked to be swaddled. It was like a personal Houdini challenge to herself to get out of the swaddle faster than she did the last time.

She has given up the pacifier. She never took it for Puff and only ever took it for me in dire exhaustion emergencies. But now? Whenever I try to give it to her, she gives me the "Bitch, please. I know there's no milk coming out of that thing" look.

She now looks at her toys if they are within sight. If she doesn't have one in her hand, she looks at you with a "Bitch, please. I see that toy. Why is it not in my hand?"

Apparently my daughter calls me "Bitch" a lot in her inner-most thoughts.

While she is doing much better in the sleeping department, she is still a much better napper these days under two scenarios. (1) She is in the car or (B) She is asleep on your chest. Since I am going back to work soon and won't have that much time with her anymore, I cherish the naps on my chest. Even if it means nothing else gets done.
I had mentioned ever since she was an itty baby, she has wanted to have her hands on her bottle. Well, now she can officially hold it by herself if it's not too full. She will even play with taking it out of her mouth and putting it back in. Sometimes I have to help with that part though.
She has taken to "standing" a lot in our laps too. She can sustain the weight on her legs for way longer than I thought a 3 month old could.
All told, she's an independent baby who wants to figure things out quickly so she doesn't have to wait on relying on her parents to do them for her. I definitely am betting on an early crawler and early walker.
But despite all these things she does that make her difficult at times, she also does the sweetest thing these days. When you kiss her on her cheek, she turns her head toward you, mouth open, and plants a big ol' slobbery baby kiss right back on your cheek.
Cutest. Thing. Ever.
Posted by Gail at 8:52 AM
Email ThisBlogThis!Share to TwitterShare to FacebookShare to Pinterest