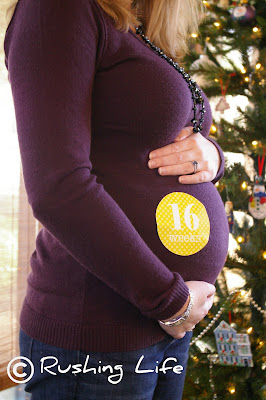 On the bright side, I've now been medicated for about 5 weeks and that anti-nausea medication is like a frickin' dream come true. I could totally have a second baby if they dope me up on that stuff earlier than 11 1/2 weeks! Remind me again why I was such a dummy and didn't call to inquire about that sooner? Eh... lesson learned for next time, right?

Not too much has changed, other than the lack of nausea. Although I am starting to show. I broke down and bought some maternity clothes. Puff was pretty certain I was starting to stretch out my regular clothes. I was pretty pumped to get size 8 pants buttoned for a few days though during week 15. It's the minor victories, people. I did realize, however, on the first cold morning that my winter coat is NOT going to last me through the rest of the winter. (Even if winter is just until sometime in February around these parts.) ::sigh:: Just another expense. I'm gonna owe Puff a lot of blow jobs for this one.

Side Note: That's funny because when we were at Target one day when it was crazy busy, buying maternity clothes, he said (rather loudly) that he would pay for half of the clothes if I gave him "a BJ" later on. Don't worry... several people heard him. That boy is nothing if not loud.

I went to the doc yesterday for my 16 week check-up. Which totally means that our next visit in January will be the next ultrasound. Which means we will finally get to know which "K" we are meeting this May! (Both names we have picked out just happen to start with the same letter. Coincidentally, they're both Irish in origin as well.) The heartbeat was really strong, which made me feel so much better. I've been under a ton of stress lately and have been having some cramping, so I was definitely concerned about the health and well-being of little Bimmer. Apparently he/she is pretty resilient and thankfully the holidays will afford me about another week of rest and relaxation.

If I can contain my excitement for a whole 4 more weeks until the next ultrasound!
Posted by Gail at 7:37 AM
Email ThisBlogThis!Share to TwitterShare to FacebookShare to Pinterest