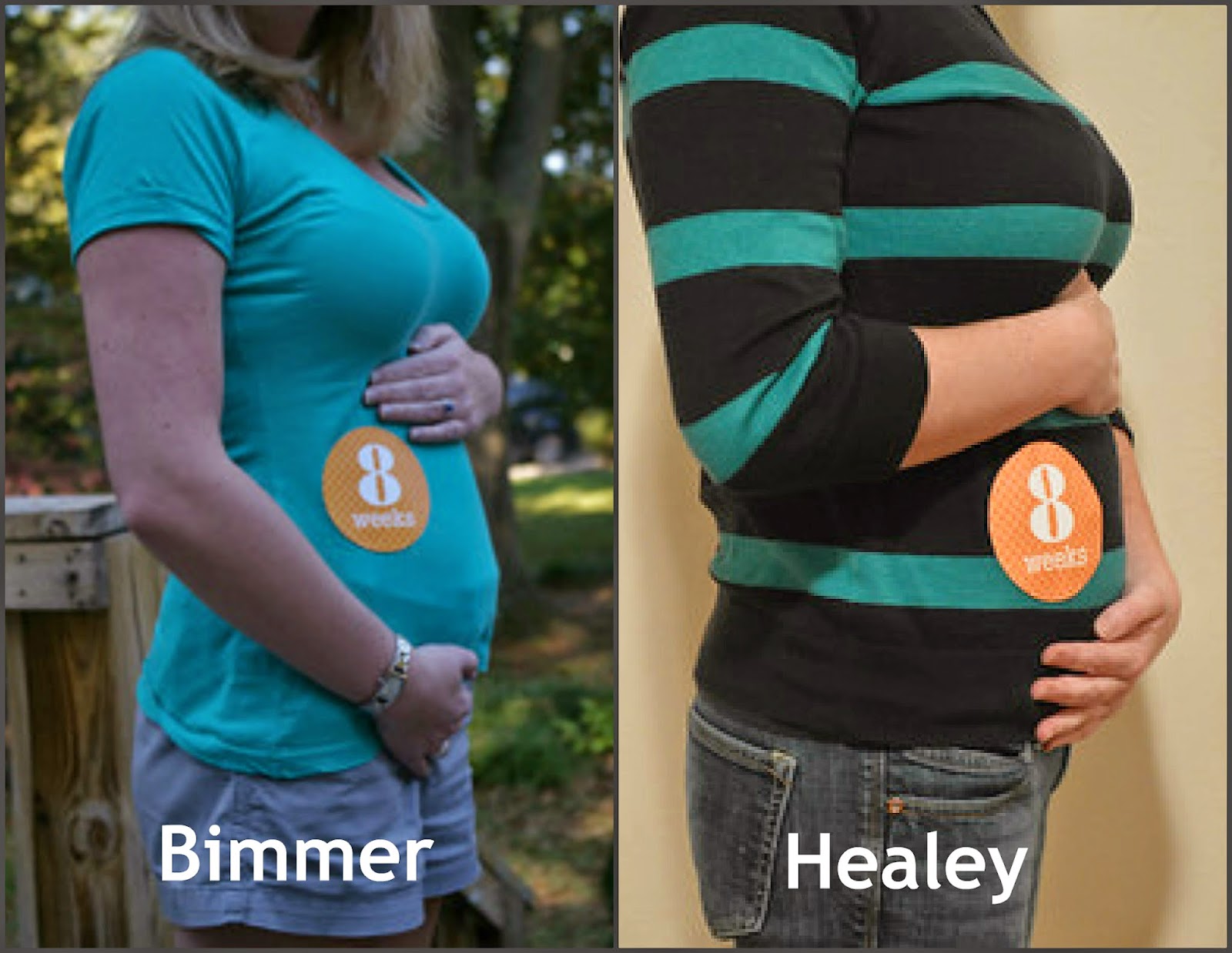 So here's how I plan to work these updates. My hope is that I can do them monthly and include a side-by-side bump comparision between Bimmer's and Healey's pregnancies. I will also hopefully find time to be able to link up from the same update from last go round. Check out my first bump update with Bimmer HERE. Of course, I am a pregnant mother of a toddler who also works full-time, so one never knows how according to plan this will all go. We are most definitely winging life these days. God help us all.

First things first... how did we get here???

Well, back when Puff and I first decided to talk about kids, we were so set on wanting Irish Twins. Then I had a difficult pregnancy and a demanding newborn, and we came to our senses. We put off a second baby for at least a year. Then a few more months. We finally came to the "decision" that 2014 would be our "year of the decision." Either we would try to get pregnant, get pregnant, or accept that Bimmer was the perfect only child. Puff was pretty convinced that Bimmer was good as an only child. However, I was on the fence. Like literally dangling with feet on both sides. There were pros and cons to both and I was so torn. I wanted the universe to make a decision for us.
We finally decided to try for a few months (that would yield a March/April/May baby - which are ideal baby times for me that equal no hugely pregnant South Carolina Augusts to live through.) Alongside this, I was having repeatedly bad pap smears come back. Finally, in September, after a few months of baby attempting, I was kinda getting tired of it all. And my doctor told me that I needed to have a LEEP procedure done to just ward off any bad va-jay-jay omens and move forward with my life. And that meant no trying for babies while I worked that situation out. Looked like the decision had been made... Bimmer was going to be an only child. I was 100% OK with that decision. In fact, I started researching B&Bs in Newport, RI, for Puff and I to take a 2015 anniversary trip without Bimmer. I even requested a week off for a trip to the Turks & Caicos. Life was moving on and I was excited to do so.
Then, one morning the week of Halloween, I woke up feeling nauseous. It passed by the time I got out of the shower. The next day, I got to feeling sick mid-morning at work. I ate a biscuit and it was better. A few co-workers questioned if I was pregnant. There was no way... I had had my October period. Right on time, normal and everything. But then I got to thinking... my breasts had been a little sore. I was super tired. Maybe? Nah... but I would take a test anyway. You can imagine my pure and utter shock when I saw two lines on that test. I stuttered to call for Puff into the bathroom. It had to be wrong - there was no way. So I waited an hour and took another one. This time, the two lines were immediate. Yup... I was pregnant. Puff and I were both in a state of shock. I couldn't believe that our life was about to get flipped like this, when we had thought we were done with the thought of a second baby. Puff was scared about our financial situation welcoming another baby.
I scheduled a doctor's appointment, but it wasn't for a few more weeks. Then... the nausea hit full force. I dug out some old Zofran from Bimmer's pregnancy and it helped some. I called and begged the nurses to call me in more. One day, during week 8, when I was out of my medication, I actually had to call in sick to work because I was so sick to my stomach. It was just like the last pregnancy... nausea hit exactly at 6 weeks, which is how I knew how far along I was, since I hadn't missed that period. How was the pregnancy otherwise up to week 8? Well, seeing as I only knew for two of those 8 weeks, it was pretty steady. Just lots of head-in-the-toilet time. Even on medication.
Wow... here we go. Baby Healey is on his/her way. When I asked Bimmer if she knew what was in my belly, she said "my baby!" I didn't even know that she knew that's where babies came from. Smart little girl. As for our preference as for a boy or a girl? Well, of course, first and foremost, I just want a healthy pregnancy and a healthy baby. Besides that, it doesn't really matter. Most people are pulling for a boy, so we can have one of each. But Puff and I really would prefer a girl. We have all the stuff and Puff seems comfortable in knowing what to do with a daughter. It won't matter though. We have names picked out for each (even if my mom and grandma hate our boy name) and we are just rockin' and rollin' til June. I cannot wait to meet Healey.
Our lives are never going to be the same.
Posted by Gail at 12:02 PM
Email ThisBlogThis!Share to TwitterShare to FacebookShare to Pinterest

I am so excited for you guys! It's amazing how life can work itself out, especially when we give up control and take a step back (which is sooo hard sometimes!!) I hope you get to feeling better soon. My first trimester is always a nightmare so I feel for ya! Can't wait to see your bump updates...I was never very good with those and I kind of regret it now that the kitchen is closed and I'll never get to do it again!