Yup... I said I was going to do these monthly updates for one more year and I totally meant what I said! :)
* At her 2 year well-baby visit, she was a rockstar. She is 29 pounds, 4 ounces (which puts her at like the 85%) and she is 34 inches tall. She let them take her blood pressure and prick her finger like it was no big deal. She even didn't cry when they gave her a shot! The nurse was so surprised! Doc Hottie made a comment that Bimmer reminds him of someone closer to three with her development. He was asking if she said at least 20 words and I said she can probably name that many animals alone. She never speaks on cue, so I figured he would never hear her talk, but then she pointed to the bookshelf in his office and said "I want more books, Mommy." He said I definitely shouldn't worry about her speech and that it will just get clearer. However, her ears are still a problem. We will get an update in September, but we may be looking at another set of tubes and having her adenoids removed.
* I kinda want to video tape every single word that Bimmer says right now, because some of them aren't quite right and they're just the cutest thing ever. I mentioned a few last month, but here are a few more that I want to remember:
blueberries = boo-blees
strawberries = staw-bees
Froot Loops = boop-a-loops
napkin = why-kin (which I take as a mix of "wipe" and "napkin")
helicopter = hella-hopper
bicycle/motorcyle = bike-uhl
computer = pewter
bird = bobo (this one is going to be the hardest one for me to let go, because besides mama and dada, this was one of her first words)
* I've seen snippets of the two year old independence coming out. There have been plenty of "I do it, Mommy" moments. Or "I'm a big girl" with a stare that says, back the f**k off and let me do this myself. The time she most often wants to do this is going down stairs. Thankfully we only have a few off our deck, or else we would never get anywhere quickly!
* Recently, she has started saying our last name. She will call herself "Dee Dee XXXX" and then call me "Mommy XXXX." But my favorite is Puff... she calls him "Daddy XXX" but uses his first name. Every once and awhile she will say my first name, but typically she gets mad when we ask her to say my name and just calls me "Mommy." Now if we could just get her to actually say her first name. I guess that's what I get for giving her a mouthful of a first-middle name combo!
* Bimmer has started 2K. Yes, that's a thing. She is flourishing already and I love the progress she is making already in this class. She comes home talking about what they did at school that day, by way of colors and counting. She really likes her new teachers, and I greatly appreciate that her lead teacher is a guru in potty training! On her second day in that class, she both peed AND had a BM on the potty at school. Is it wrong for me to hope that they do the bulk of the potty training for me? 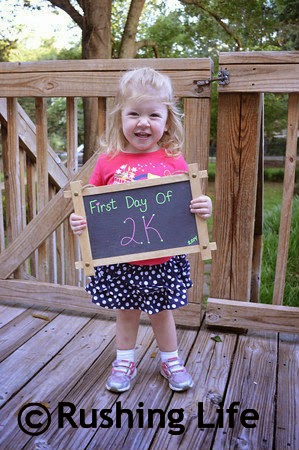 * In news of random milestones, she can now climb steps without any assistance (from me or a railing) and doesn't even have to bend over and use her hands to help. Such a big girl! Other miscellaneous things - She loves to count, but it is often "1,2,6." I think 6 is her favorite number. She also sings her ABCs and Rock-a-bye Baby. She likes to "ex-cise" with me and will do crunches, planks, and leg raises with me. And if you put on her running shorts, she says she is going to the gym.
* I can't remember if I've written about this before, but I just love when she wants you to pick her up and she says "Hold you, Mommy." So adorable!
* She is learning her shapes - triangle, square, circle, and rectangle. She is also doing better with her letters. She can pick out C,D,M,O,S, and Z. And she knows that "D" equals "Daddy" and "Z" equals "Zipper," for example. And she is working on different colors like black, white, brown, and silver.

Posted by Gail at 5:47 PM
Email ThisBlogThis!Share to TwitterShare to FacebookShare to Pinterest