We've been back in the real world now for about a week. And let me tell you... it's difficult. Not that vacationing with a toddler is a day at the beach. Even when you are literally spending the day at the beach. 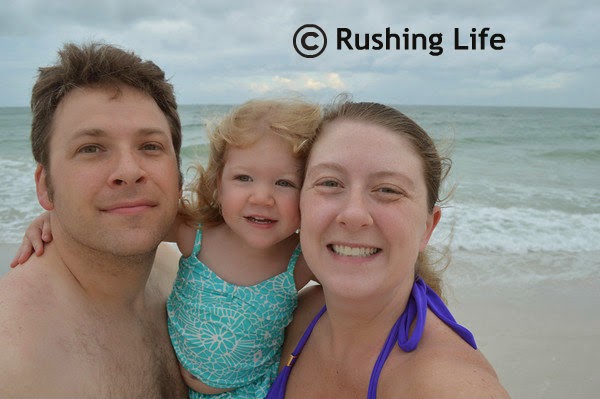 Our trip consisted of half a week in Sarasota, Florida, and then the second half in Clearwater. Be prepared for two long posts about our adventures. Don't worry... I'll save the actual flying with a toddler info for a completely separate post to come. (I figure some of you are anxious to hear how that all went!) So let's get this party started....
The first day was mostly spent traveling, so our biggest accomplishment was heading to dinner. We were staying in downtown Sarasota, at the super nice Hyatt Regency Sarasota. (Thumbs up on service, price, location, etc.) Lots of people had recommended dinner at Phillippi Creek, which is just south of downtown and was a quick and easy drive. Once you are actually in the restaurant, you don't even notice that you are adjacent to a major 4-lane roadway. 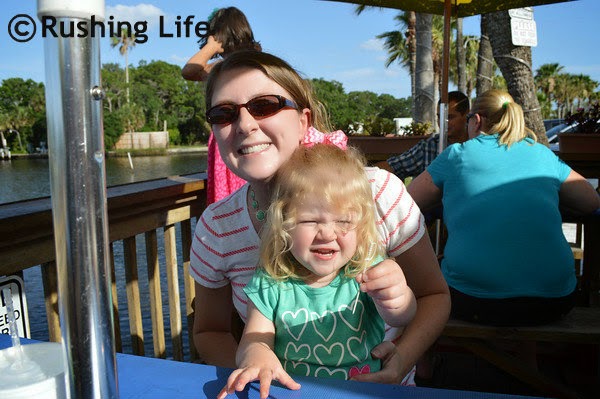 However, for all the hype, it wasn't our jam. The service was spotty and the tables were dirty and on top of one another. The daiquri had so much rum in it that it was virtually undrinkable. The rice had mushrooms in it - how random! (I sent it back, and will say that the herb potatoes were supurb.) Puff ordered stone crab, which we knew wouldn't be cheap, but it was market price and our dinner ended up being waaaaaay more expensive than it was worth. I would hate to see what that place is like in busy season!
Monday's mission was to enjoy the super awesome pool at the hotel. Bimmer is such a daredevil when it comes to water... she will jump and splash and swim under waterfalls. I love that she is such a water baby! 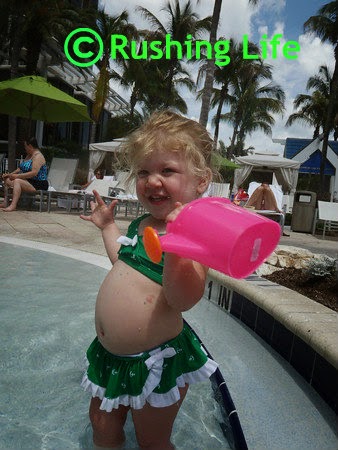 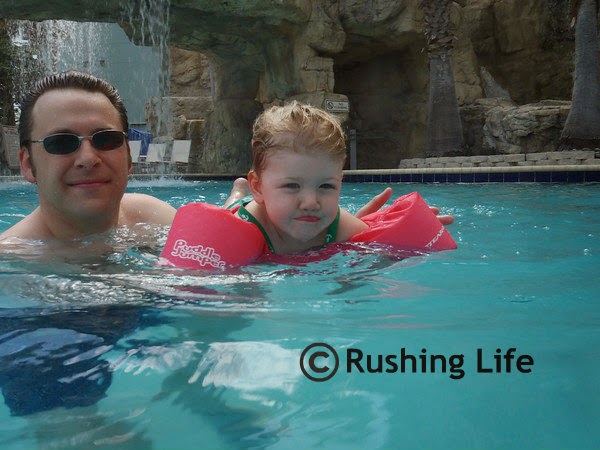 That night's dinner excursion took us down to Siesta Key (maybe a 25 minute drive) to the Daiquri Deck. They have a few locations, but this seemed to be more our speed. They had a huge open-air deck that let all the breeze blow right through. The service was good and the food was really good, which was not necessarily expected from a place that had been recommended to me by someone who had just gone there for drinks. Speaking of which, FYI - they only can do strawberry without alcohol. Since we're not huge drinkers, we just had them not top the drinks with extra alcohol and they were perfect. 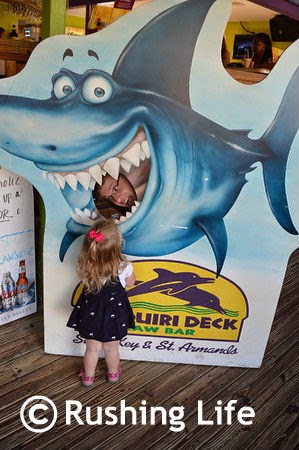 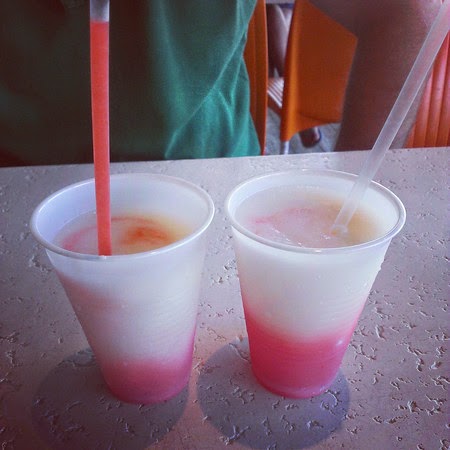 Are you beginning to think all we do on vacation is eat? Well, yeah, that's fairly accurate.
Tuesday morning, we headed over to the Mote Aquarium. I didn't have super high hopes for it, since I knew it wasn't huge and we have been to some other, better, aquariums before. However, it turned out to be just the right speed for Bimmer. She loved running around to the tanks and peaking in. She learned the word "jellyfish" and kept calling all of the fish by that name. The separate building with the dolphin was a disappointment... it was one lone dolphin just literally sitting in one spot. Travel Tip: Lots of aquariums and zoos have "exchange" programs where you can get discounts into other zoos/aquariums with your membership card. So, I packed ours from our local zoo. And it ended up getting us in for FREE! That's a savings of $40+ and it made us not feel so bad about splurging on lunch and a few gift shop items. 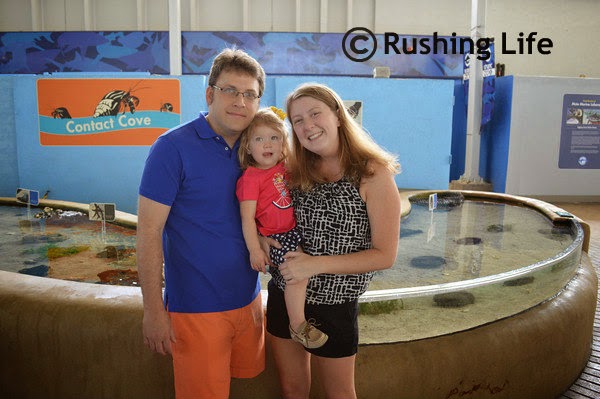 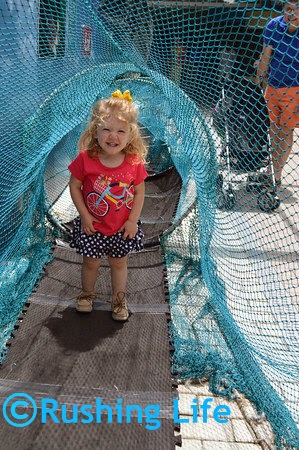 That night, our stomachs took us out to Anna Maria Island to visit the Rod & Reel restaurant. (I would link, but they don't have a website that I can find.) We had taken Bimmer there when we visited back when she was only 5 weeks old and the food was so delish, we had to return. This time was no exception... Bimmer even scarfed down a crab cake! Who knew she liked them? The only gripe was that the outside patio had no air circulation at our table, so all three of us were literally dripping sweat. So, we just ate fast. The service was good and the food was awesome. Don't let the scary pier fool you! 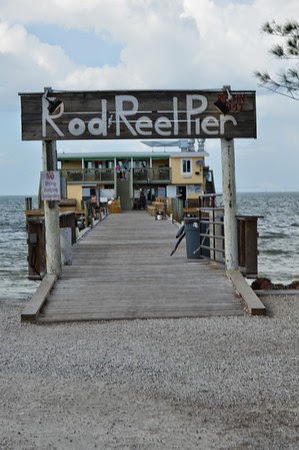 Our last morning in Sarasota was the big shabang. (That's a technical term.) As we prepped for our trip, we kept talking with Bimmer about what we would see and do. We talked about swimming and the beach and seeing fish. And then we would talk about seeing flamingos and she would always add "And goats!!!" She was so set on seeing some flamingos and goats on this trip. We were bound to let her down. However, Sarasota Jungle Gardens was prepped for the task. Bimmer must've known something we didn't... because in addition to all the gators and parrots and reptiles, there were flamingos (that we got to feed!) and sure enough, goats. It kinda sorta made my day when we rounded that corner and Bimmer screamed "goats!" because I knew she was just over-the-moon excited. Never mind her freak-out when they got close enough for her to touch! 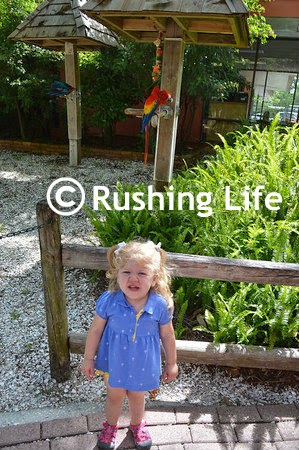 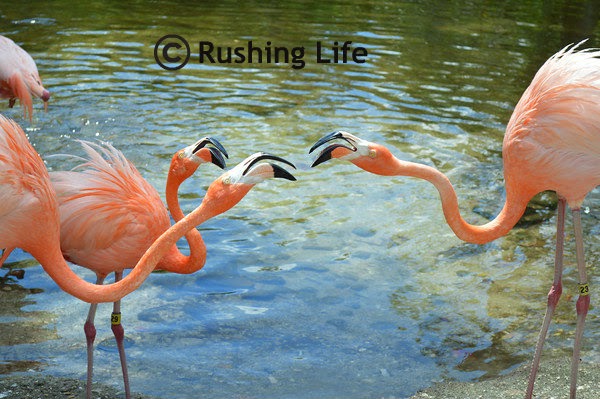 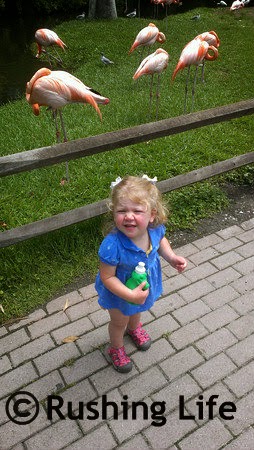 Traveling with an almost two year old isn't always easy, but it is so fun. I have traveled all my life and while, yes, I have my stresses and wishes for a nap, etc. when taking Bimmer on a trip, I always love having her with me. She just makes it better. Travel, and life. 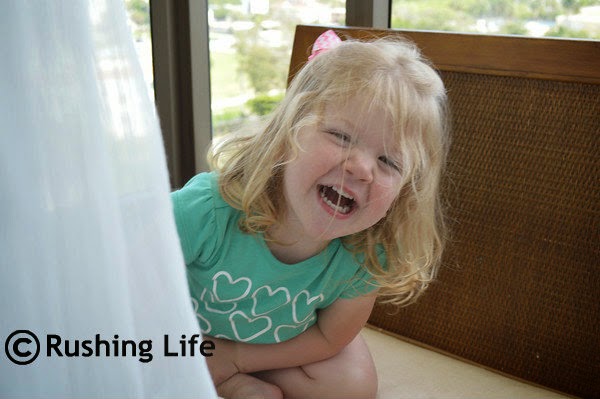 **Sidenote: Our time in Sarasota was also split between time with visiting my mom, who has MS, in her assisted living facility. It was a bittersweet time for me. It is difficult to see your mother in that state to begin with, and then it is also very difficult to watch her interact with your 2 year old who doesn't know her and doesn't understand. While I am not trying to sweep that part of our vacation under the rug, it is just not something I care to elaborate on at this time. I am grateful that Puff and I are able to travel to her, since she cannot travel to us. I am thankful Bimmer has a grandmother who loves her so much.**
Posted by Gail at 9:45 AM
Email ThisBlogThis!Share to TwitterShare to FacebookShare to Pinterest