For as long as I can remember, I've had this strange fantasy of wanting to be a meteorologist. Specifically, on the beach reporting during a hurricane. 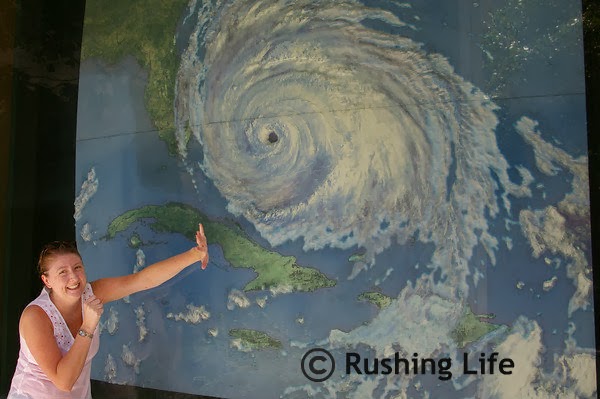 That being said, I'm generally intrigued by all major weather events. So when I was hearing days worth of "the storm of the century" I was glued to social media, the weather channel, local news. The forecast kept changing... ranging anywhere from a few inches of snow to a major ice storm where we would surely lose power. The final verdict seemed to be a day worth of an inch or two of snow, followed by a second storm that would drop 5 to 10 inches of snow. Do you have any idea how crippling ten inches of snow could be to South Carolina?!?
The last time it snowed (two weeks ago... read about it HERE) Bimmer was unsure about the white stuff. After the gorgeous snow on Tuesday, which didn't stick to any streets, but to the deck, yard, and trees, I took Bimmer out to test the waters. She liked that it was thick and fluffy enough to shuffle through it. But when she touched it with her hand, she grimaced and yelled "All wet!" 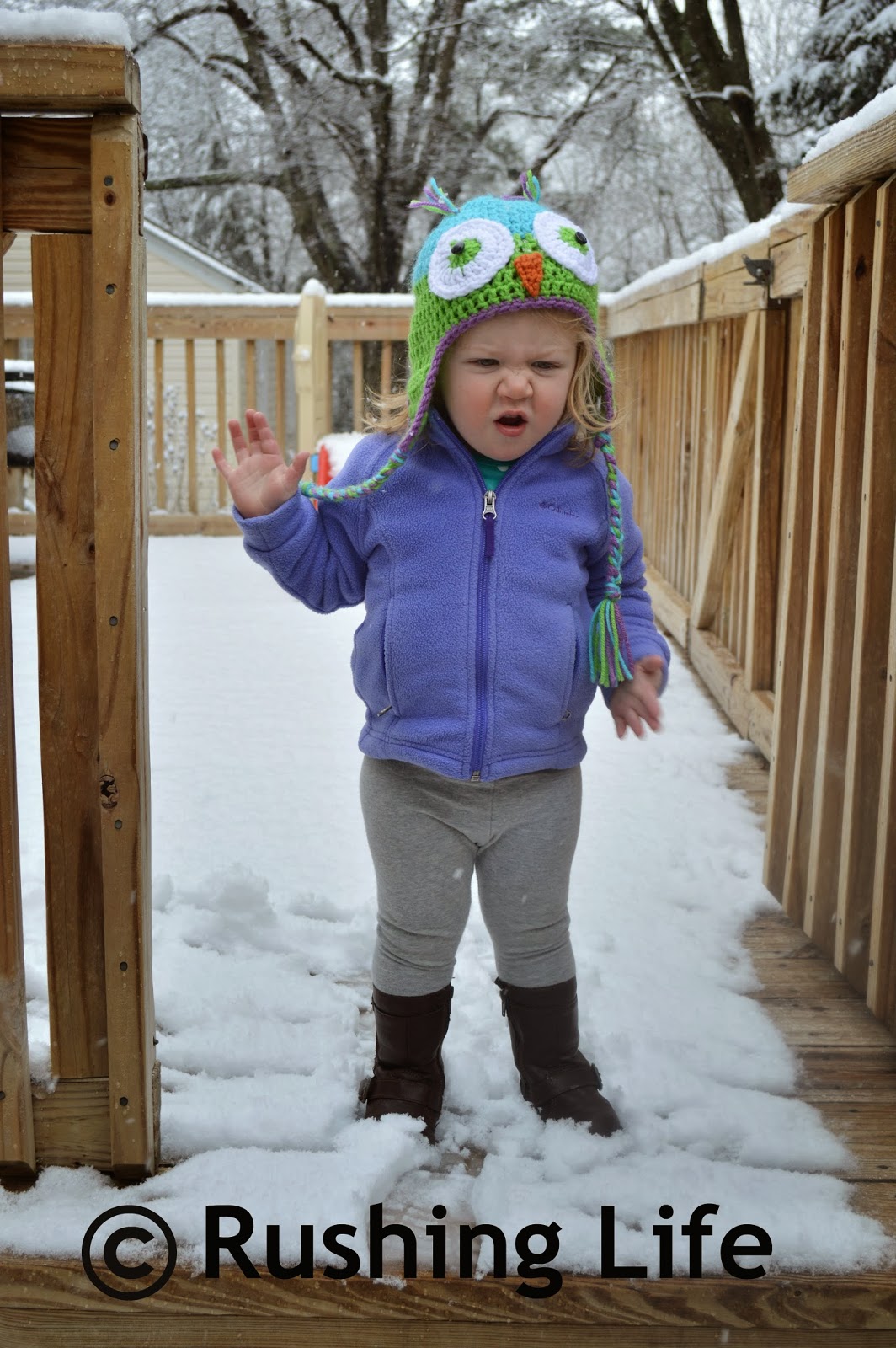 (This was her reaction once she got snow on her hand) 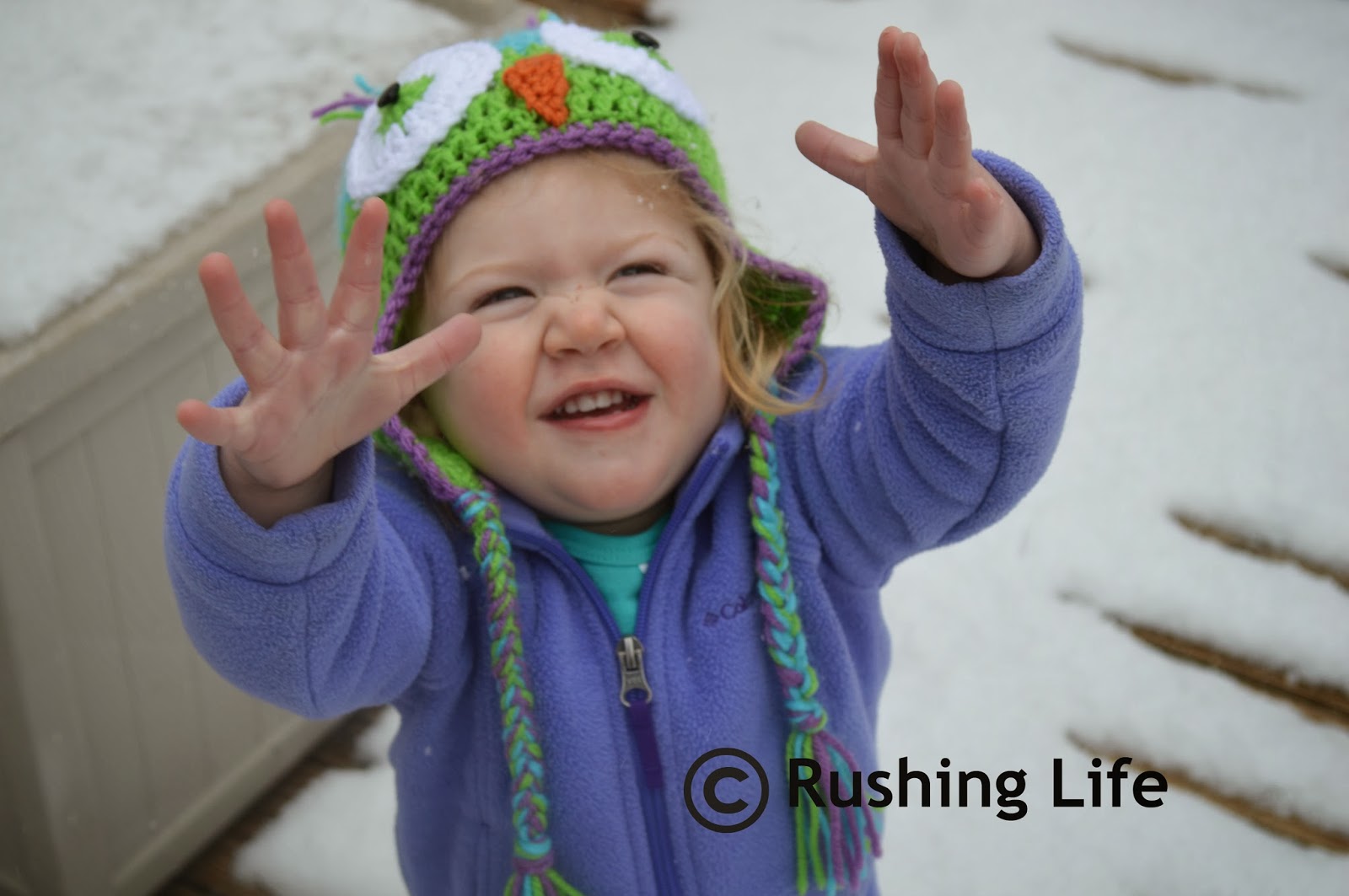 Trying to catch snowflakes
Today, we woke up to... well, nothing. I double checked all my sources and when both The Today Show and The Weather Channel were actively talking about snow in South Carolina, I knew we were in for it. By 7:30am this morning, the snow had started. And by 9am, it was pretty darn thick already. Puff got to stay home with us this day (which was great because I would've been worried to death had he tried to venture out to work) and before lunch, we took Bimmer out to play in the snow. It didn't start well... she fell down the steps from the deck to the yard. Thankfully, it had snowed so she had a cushion! 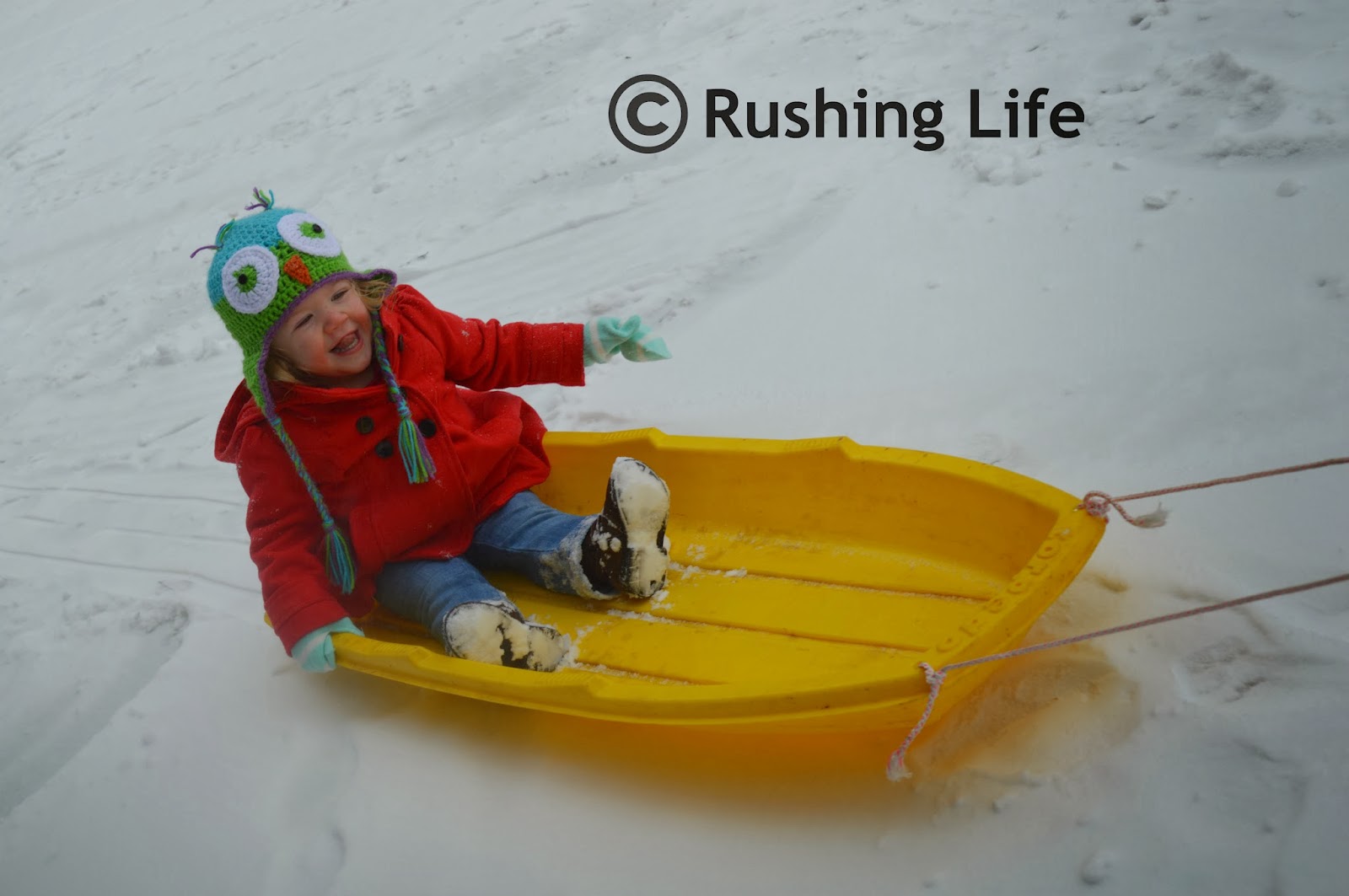 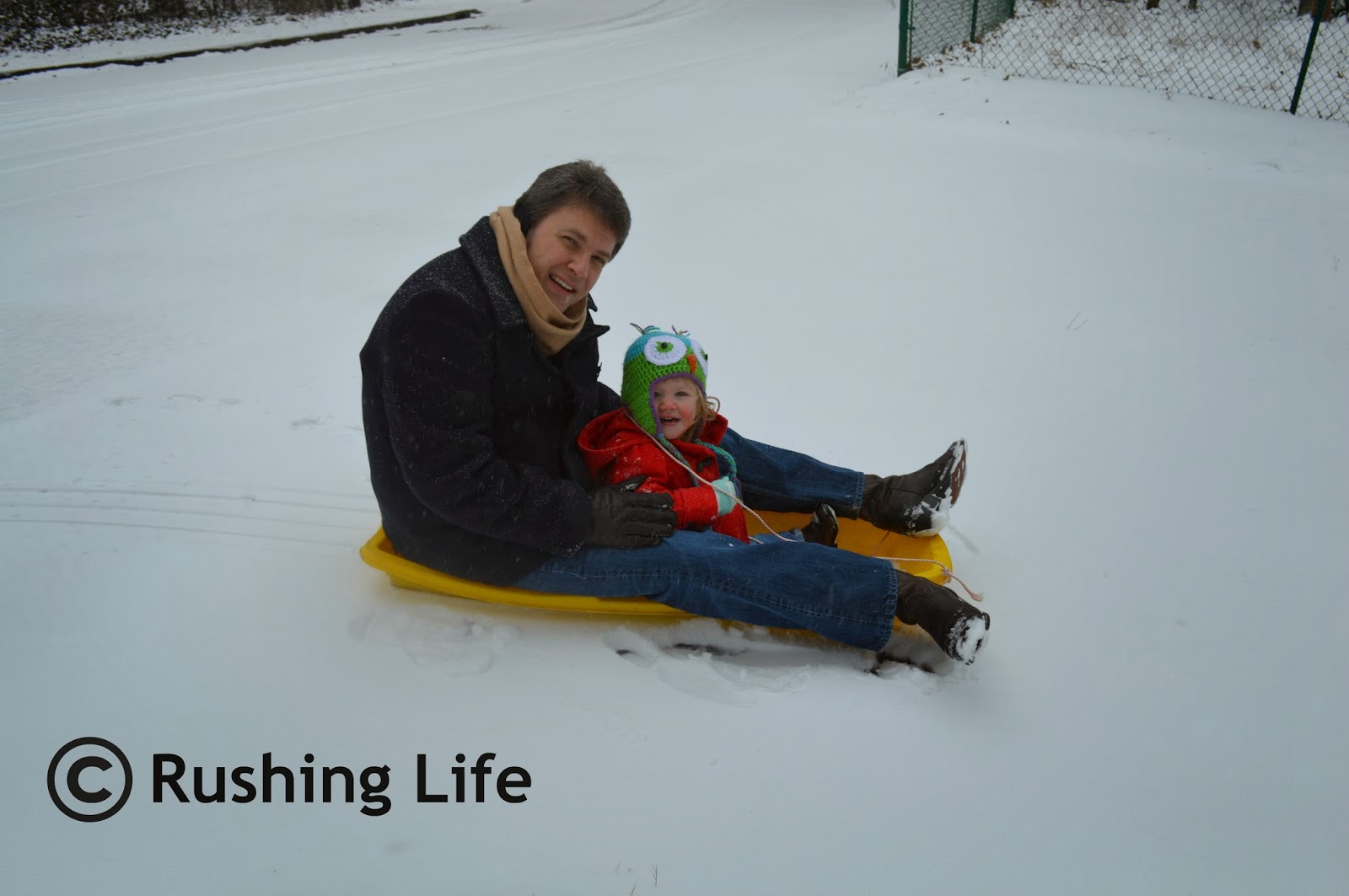 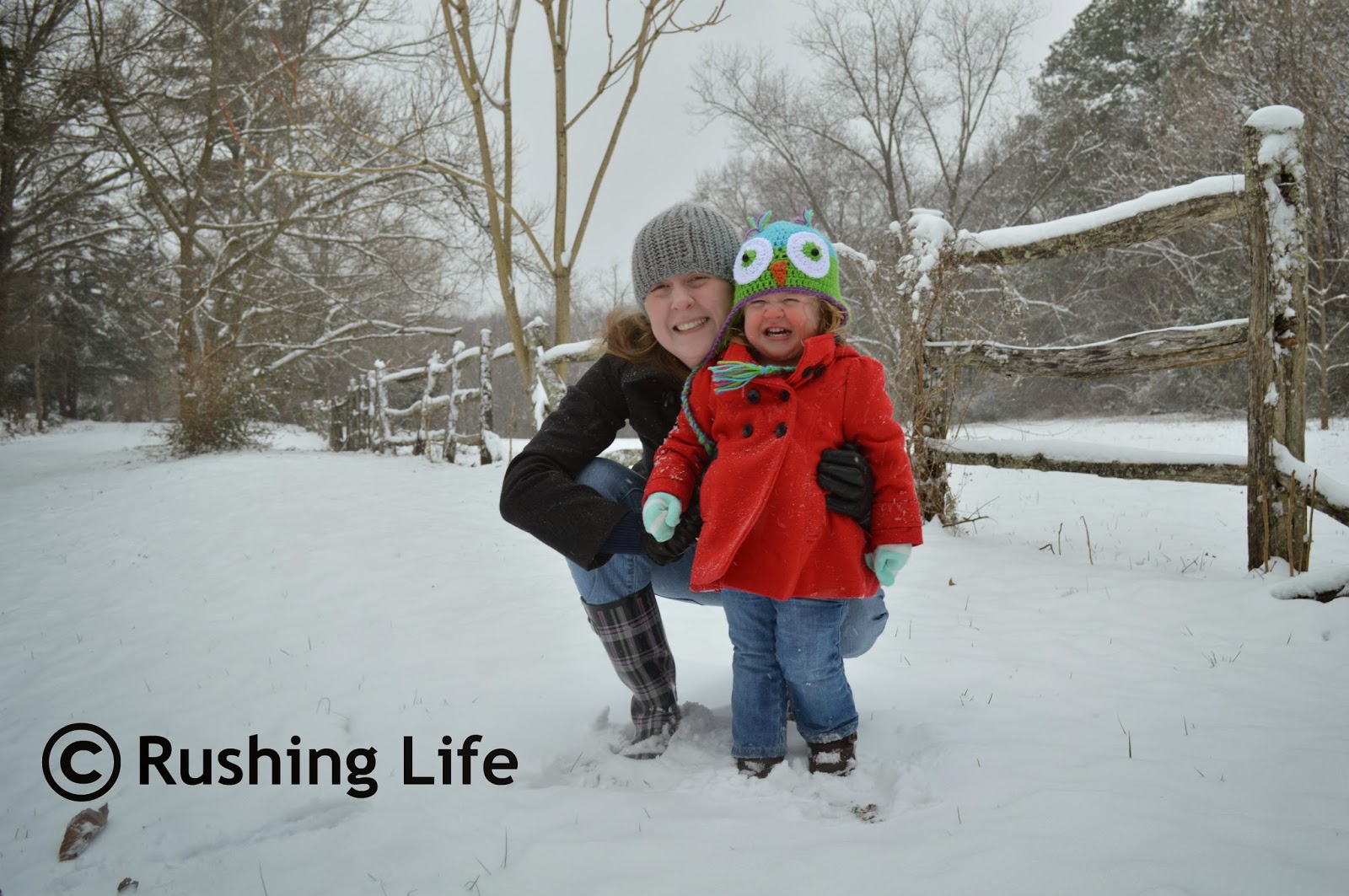 While we weren't outside too long, and the snow is *still* coming down, it was a sweet little moment in our lives. Bimmer got to play in snow for the first time, ride on a sled, and have her first face plant wipe-out when she fell off the sled going down a steep little hill in our yard. Here's hoping it's the last snow we have for awhile!
Posted by Gail at 1:34 PM
Email ThisBlogThis!Share to TwitterShare to FacebookShare to Pinterest