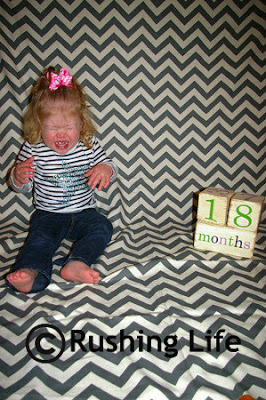 Yup - very much a toddler!
How and where did an entire year and a half go?!?!

Time to start working on a sibling ;)

OK... but for real... a few little updates on things Bimmer is doing/saying these days...

1) She has discovered raisins. They are da bomb.

2) We are trying to work on manners, so when she points at something she wants or signs for "more" we are trying to encourage "please" and "thank you." She does the sign for "thank you" if she's prompted. And she says "pees" when you tell her to say "please." Pretty much the cutest thing ever.

3) She has relapsed a little on the whole sleeping in her crib thing. It's totally our fault. We're working on it. Slowly.

4) I love telling her to say thing and listen to her repeat the words to me. Some things she knocks out of the park, like "cardinal." Who would have thought? Others, not so much. She did pretty well saying Puff's name and when I asked her to say mine, she said "Tee Tee" which is the exact same thing I called myself when I was little!
5) The kid is obsessed with pretzel crisps. She calls them "cacas" (her version of "crackers") and does her sign for "more" the minute she sees the bag. Even at the grocery store, she spotted the bag and had to carry it around with her in the cart. I let her dip them in cream cheese one night and she went "mmmmmm" with a big smile. I think I blew her mind.
6) She has finally started to really show true fear. I've noticed it most with animals. She likes them from afar, but if they get near her, she freaks out. There's a cat in the neighborhood that's been hanging around the house and now, even if it's not that close, she screams. We are working on DH consoling her versus telling her to "suck it up." She has also shown fear when we sit her on the counters or washing machine. (Of course we don't leave her unattended!) But she'll scooch back to the back now to not be near the edge. At least she has that instinct!
7) She still hasn't mastered climbing and I feel like she's a little behind on that. She can go up steps OK and can get down off the couch or bed OK. But she can't get up on any of the furniture to save her life. Part of me is fine with it though... one less thing to worry about.
8) We have officially retired all her 12 month clothes. I was holding on to some of her jammies, even though she was rockin' the Honey Boo Boo look with the bottom of her belly hanging out. We are now in all 18 month clothes and some 24 month jammies. She is still in her 4 1/2 shoes that we bought her back in April! We plan to get her new ones in January if she hasn't grown out of them by then. That's a long time for kid shoes!
9) I'm obsessed with her giggles. I chase her around the house just so I can hear them.
10) No, we haven't gotten rid of the bottle yet. Doc Hottie had said he wanted her off it by 18 months. That didn't happen. Why? Because I hate sippy cups. My goal is to get her off bottles by the end of January. It's not going to be pretty. I am also hindering her ability to eat with utensils. I rarely give her one because she makes such a mess. Time for me to let go of that. My baby girl has to grow up somehow!
11) As strange as it is, she loves lotion. Her cheeks have been chapped lately with a burst of cooler weather, so we've been putting it on her daily. She loves it! She likes to help squirt it out and rub it in. She wants us to rub it in on her belly too. It must just feel good!
12) For as sweet as she can be sometimes, she is very much a toddler trying to assert her independence, test her boundaries, and see how much power she really has. We are in for it!

Posted by Gail at 5:19 PM
Email ThisBlogThis!Share to TwitterShare to FacebookShare to Pinterest