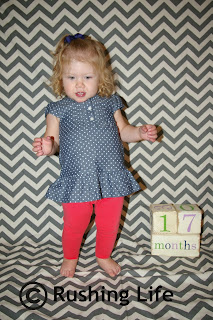 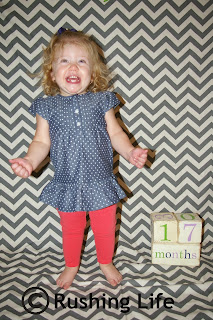 This month's entry is going to be short and sweet. Bimmer continues to steal all my love every single day. From her sweet kisses to her insistence on waving at every horse, dog, and squirrel she encounters, I can't say enough about how awesome it is to be her mom.
Speech: I keep forgetting what words are actually new to this month or not! I know that she's now saying walk, hello, school, and eye very clearly. And knows when to use them as well. She screamed "hello" at a guy in the grocery store one day. It was too cute... he screamed back! And she points... er... make that POKES you in the eye when she says that word. She is saying "ee" for ear and "no" for nose. Her tongue-wagging version of elephant is now just "la la." She sometimes call lions that too. And she calls zebras "baby" sometimes for some reason. She can't say monkey yet, but she makes the most adorable noise when she sees one... kind of an "ee ee ee" noise and bobbles her head. She sometimes goes "woof" when you ask her what a dog says and she makes a raspberry noise when you ask her what an elephant says. (Or sometimes she just hums because she can't quite get her lips to make the right sound!) She tries to say pillow, but it comes out "pilla" or "ploe" most of the time. She also just started saying "Ohhh!" when she sees something new or cool or that she wants. Most of the time it's food. And with Halloween this month, she has decided that anything and everything related to the holiday is "boo." She's pretty spot on there!
Misc: Just a random list of cute things she does that I never want to forget....
She sleeps on her stomach with her legs and arms tucked under her and her butt in the air.
The only consistent sign language she uses is the sign for "cookie." I had thought it was "more" but I was wrong. Explains a lot.
She is obsessed with birds. She always wants us to hold her up to the window to see out to the bird feeder. Sometimes she'll go "Where bo bo?" and hold her hands up in question. (Bo bo = bird)
Sometimes she just wants to lay on the floor with a pillow and always says "nite nite" before she lays her head down.
She has discovered the fun of unraveling toilet paper.
When we are home and she's hungry and knows we're working on making her food, she'll go over to her highchair and bang on it for us to put her in.
She loves to help with laundry and carry stuff from one room to the other, move it from the washer to dryer, or sort piles. She even takes the lint out of the dryer. Now if we could only get her up to speed on folding!
Just like her daddy, she is starting to like cars. She points and waves at them all the time and yells "car!"

Posted by Gail at 7:40 AM
Email ThisBlogThis!Share to TwitterShare to FacebookShare to Pinterest